Riesenbeck, Germany – December 01, 2022 – A victory is always a victory but even better when you win at home. That’s exactly what Philipp Weishaupt (GER) achieved on Thursday at the Riesenbeck International, guiding Just Be Gentle to first place in the €25,875 Speed Challenge CSI 2* […]

Prague, Czech Republic – November 18, 2022 – The very best of showjumping continued flying high on the second day of the Global Champions Prague Playoffs CSI 5*. A familiar face of the noble sport rose to the occasion, claiming top honors in the €50,000 BMW Cartec Speed […]

Stittgart, Germany – November 11, 2022 – The Hanns-Martin-Schleyer-Halle resembled a seething cauldron on Friday evening. An incredible atmosphere had been generated by the 7,400 crowd. The top 13 riders after the two qualifying classes showed their gratitude by serving up world class show jumping when competing for […]

Stuttgart, Germany – November 10, 2022 – Baden-Württemberg’s top show jumpers have been contesting the BW-Bank Indoor Championship ever since 1986. The final took place in the Hanns-Martin-Schleyer-Halle for the first time in 1987 and has since become one of the big jumping attractions at the Stuttgart German […] 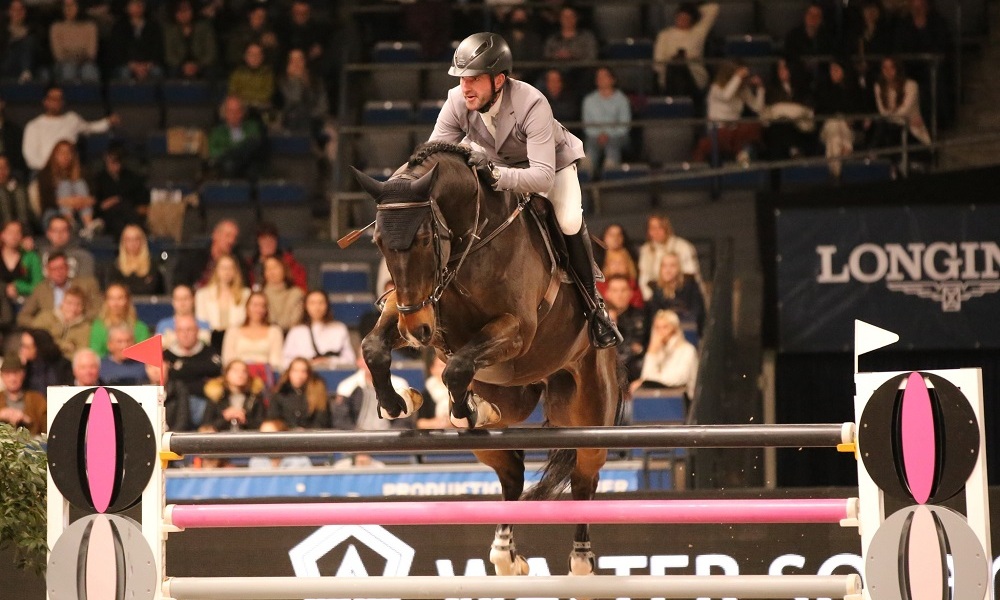 Philipp Weishaupt & Krokant Power Past the Competition in the €28,000 Prize of Firma XXL-Sicherheit CSI 5*-W

Stuttgart, Germany – November 10, 2022 –  German one, two, three – watched on by the national coach Otto Becker, the home country’s show jumpers came up trumps on Thursday in the international speed class for the €28,000 Prize of the Firma XXL-Sicherheit. They left Sweden’s double 2022 […] 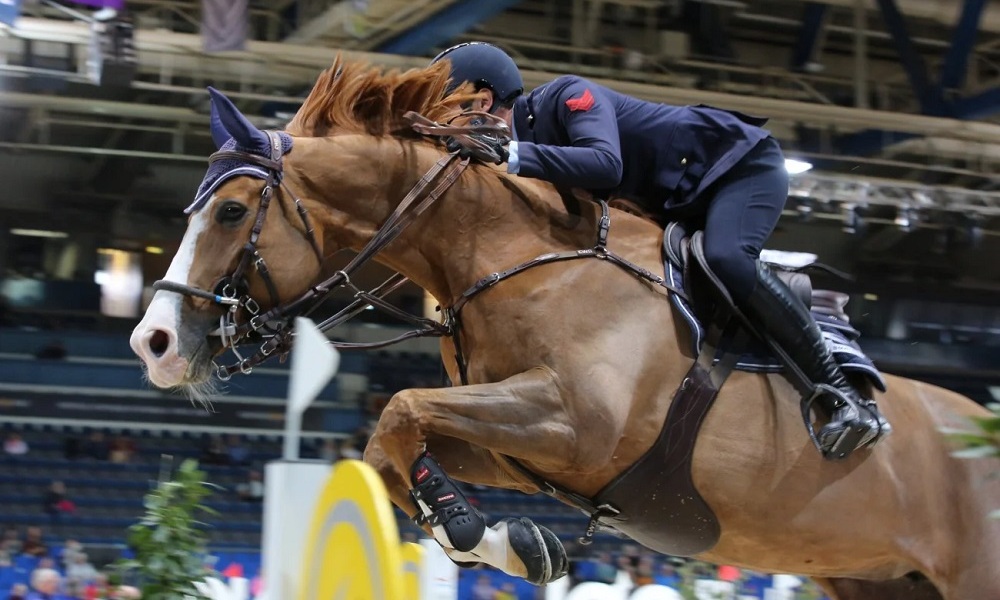 Links to Streaming Feeds of All Major Events this Week

Stuttgart, Germany – November 09, 2022 – It’s showtime for showjumping in Europe and the Americas as Germany, Canada and Mexico all host major events this week. Please refer to the links below to follow the prancing and dancing live from these 3 great horse shows and all […] 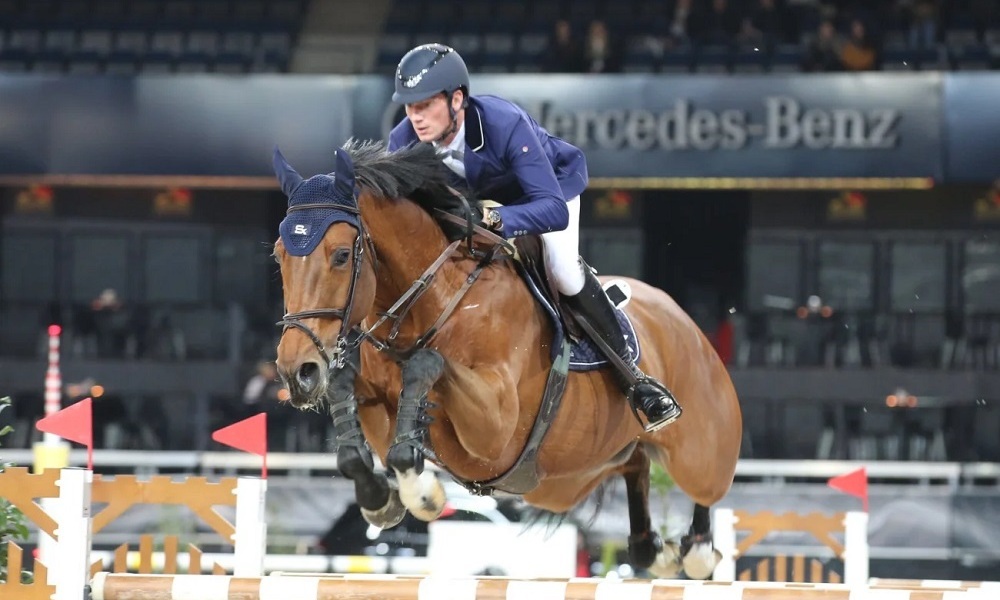 Stuttgart, Germay – November 08, 2022 – For the third week in a row, it’s showtime for showjumping at the 2022 edition of the Longines FEI Jumping World Cup™. In Europe, the fifth leg of the Western European League takes place at the Stuttgart German Masters CSI 5*-W […] 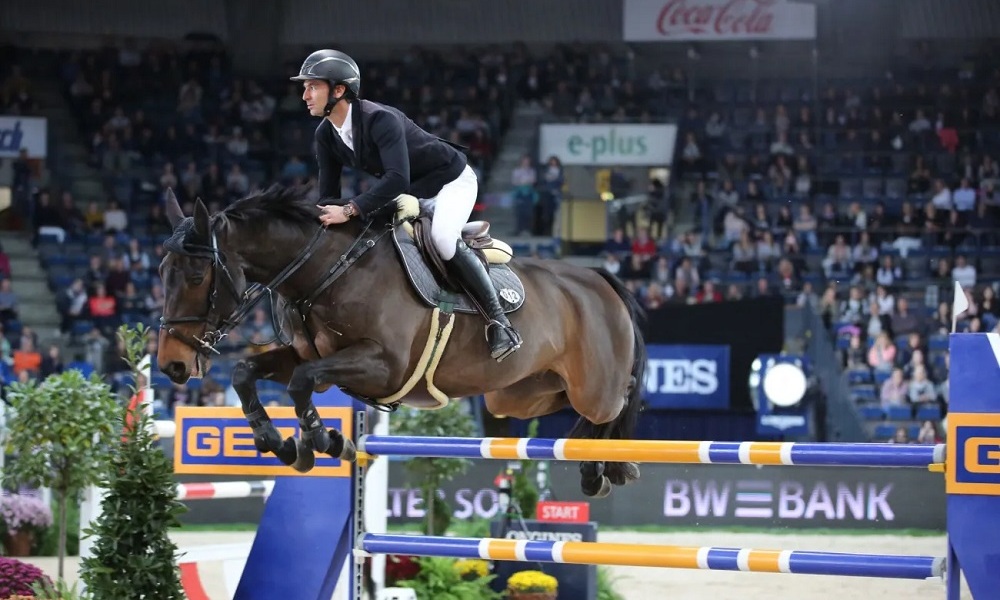 Stuttgart, Germany – November 09, 2022 – It’s showtime for showjumping at the Stuttgart German Masters CSI 5*-W and the masters of the noble sport are ready to take to the sky with their flying beasts at one of Europe’s most traditional indoor events. Steve Guerdat (SUI), Marcus […]

Riyadh, Saudi Arabia – October 21, 2022 – With the biggest day of the season less than 24 hours away Christian Ahlmann (GER) gave himself one last confidence boost with a win in the €101,000 Saudi Arabian Equestrian Federation Trophy 1.55m jump-off class. Saving Dominator 2000 Z for […]

Riesenbeck, Germany – October 19, 2022 – Riesenbeck International will make an exciting debut during the 2023 Longines Global Champions Tour (LGCT) circuit in as the only event in Germany. The event will take place from 21 – 23 July at the top quality equestrian sports facility developed […]

Tétouan, Morocco – October 07, 2022 – These facilities of Tétouan Equestrian Centre, in the superb installations of the Moroccan Royal Guard are simply magic with their decoration, this fortress of entry and its crenellated towers, these majestic palm trees, these stone tribunes of a splendid architecture and […]

Hamburg, Germany – May 28, 2022 – Depite the eighth-place finish last Saturday at the Global Champions League of Ramatuelle – Saint Tropez CSI 5*, the Berlin Eagles still have a commanding lead at the top of the 2022 GCL season standings, having tallied a total of 112 […]

Hamburg, Germany – May 27, 2022 – The penultimate day of competition at the Longines Global Champions Tour of Hamburg CSI 5* saw a home turf win for Daniel Deusser (GER) after the German rider pulled out a stellar round with former LGCT Grand Prix of Hamburg winner […]

Hamburg, Germany – May 25, 2022 – It’s showtime for showjumping at the Deutsches Spring- und Dressur Derby, home of the sixth leg of the Longines Global Champions Tour (LGCT) and Global Champions League (GCL). Legends of the sport are set to compete at the iconic grass arena […]

Hamburg, Germany – May 24, 2022 – A heavyweight line up of the stars of showjumping will head to Hamburg this week as the Championship temperature hots up for the sixth leg of the 2022 Longines Global Champions Tour circuit. Leading the pack will be last year’s LGCT […]

Kronenberg, The Netherlands – May 21, 2022 – The 2022 Spring Tour came to an end on Sunday at the Peelbergen Equestrian Centre and it was a German rider who stole the spotlight. Nisse Lüneburg (GER) turned on the nitro aboard Nebraska van’T Vianahof to claim top honors […]

Madrid, Spain – May 21, 2022 – After the fourth leg of the championship series in Madrid, the battle had intensified at the top of the leaderboard of the Longines Global Champions Tour (LGCT) championship standings. Despite having not participated in the last leg, Ludger Beerbaum (GER) still […]

Madrid, Spain – May 16, 2022 – After registering their second win of the season last Saturday at the Longines Global Champions Tour of Madrid, the Berlin Eagles lead the pack in the 2022 Global Champions League Championship race. They now have a toal of 98 points compared […] 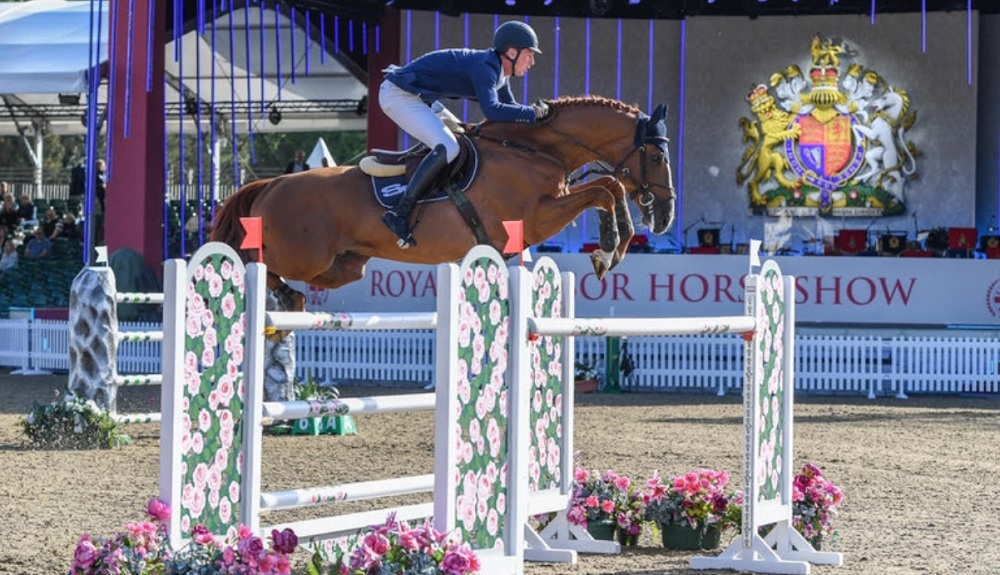 Daniel Deusser & Bingo Ste Hermelle Do It What Takes to Win the €25,500 Pearl Stakes CSI 5*

Windsor, England – May 13 , 2022 – Daniel Deusser (GER) and Bingo Ste. Hermelle were at their very best on Friday at the Royal Windsor Horse Show CSI 5*. Against some of the best combinations in the world, the dynamic duo topped the €25,500 Pearl Stakes CSI […]

La Baule, France – May 05, 2022 – The first day of the 2022 edition of the Jumping International de La Baule CSIO 5* concluded with a Germany victory and it was the former number one ranked rider in the world who was responsible for the feat. Thursday […]

Lexington, Kentucky, USA – May 01, 2022 – It was a wire-to-wire win for Germany’s Michael Jung (GER) and fischerChipmunk FRH, who set a new record for a winning score in the Land Rover Kentucky Three–Day Event CCI5*-L presented by Mars Equestrian™. The pair had been flawless all […]

Riesenbeck, Germany – May 01, 2022 – Richard Vogel (GER) is one of the young superstars of German showjumping and the young rider prevailed again on home soil. Vogel was victorious with Caramba 92, claiming top honors in the Grand Finale of the Big Tour, the €25,500 Grand […]

Mexico City, Mexico – April 30, 2022 – The Hamburg Giants kick-started their 2022 GCL season campaign with a breathtaking win in Mexico City, dramatcially snatching victory from the only other team on a clean sheet, the St. Tropez Pirates. Brilliant double clear from the seasoned Jur Vrieling (NED) […]

Mexico City, Mexico – April 30, 2022 – Ludger Beerbaum (GER) and his superstar 10-year-old mare Mila won their second LGCT Grand Prix of 2022 in phenomenal style. Last to go, the German Champion delivered a lightning-fast round setting up the tantalising prospect of a historic Championship battle. […] 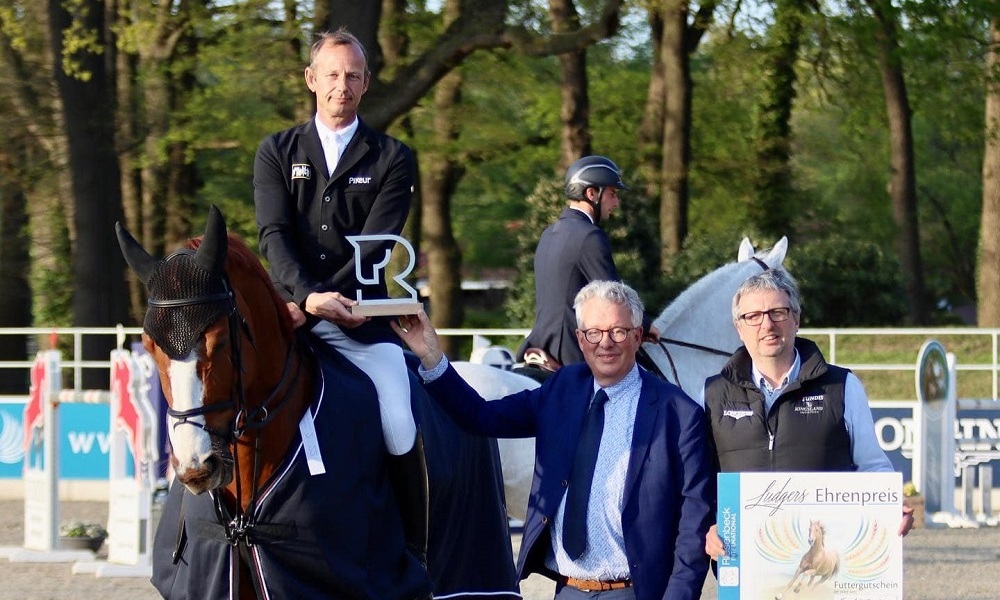 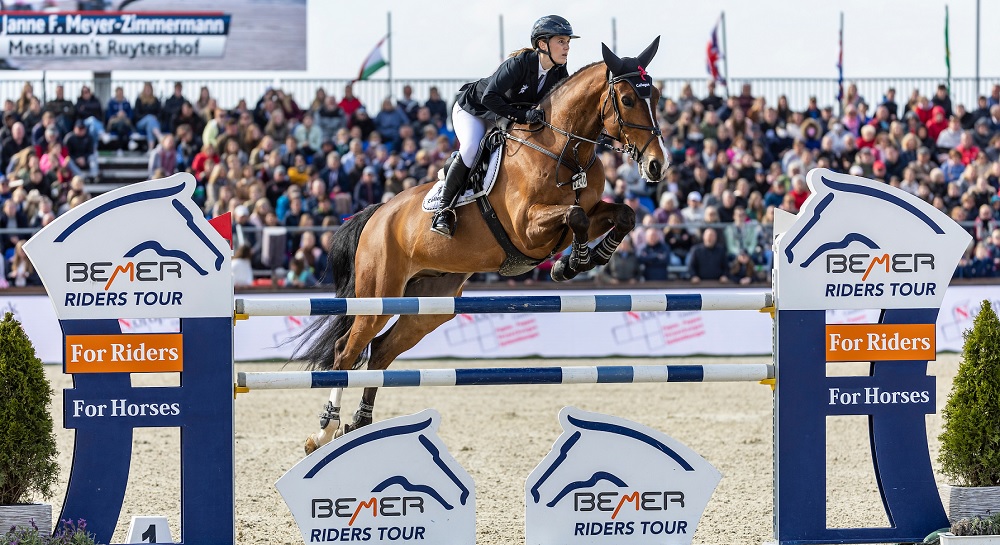 Hagen, Germany – April 24, 2022 – There’s another famous Messi in sports and it’s in showjumping! Janne Friederike Meyer-Zimmermann (GER) and Messi van’t Ruytershof were the winners of the €95,450 Deutschen Kreditbank (DKB) Grand Prix CSI 4*, the main class of the Horses & Dreams CSI 4* […]

Hagen, Germany – April 22, 2022 – He has already ridden Nations Cups, won Grand Prixs but it was the most important victory of Patrick Stühlmeyer‘s (GER) career took place on Friday. “I would describe this as the greatest success of my career”, says the German. Almost exactly 365 […]

Valkenswaard, The Netherlands – April 22, 2022 – Longines and the Longines Global Champions Tour announced today that their strategic partnership will be extended to 2027. The collaboration, which sees Longines serve as the Main Partner and Official Timekeeper of the prestigious show jumping circuit, first began in 2013 […]