Already lying tenth after solid recent results, today’s win lifts the Irishman to fourth on the League table from which the top 18 will earn a spot at the Final in Las Vegas, USA next April. 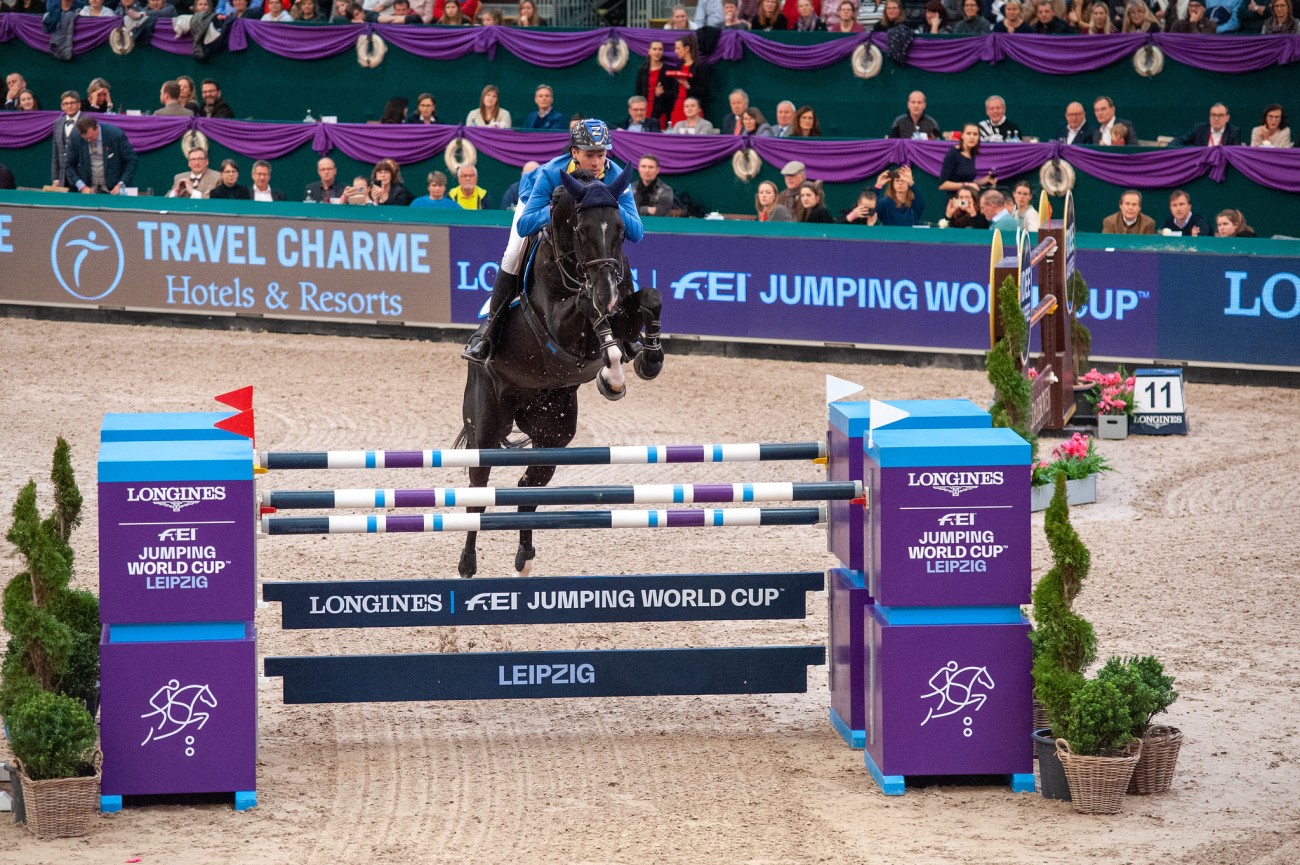 There were 17 German contenders in the starting field of 40, and seven of them made the cut into the 16-horse jump-off against the clock including 2011 series champion, Christian Ahlmann (GER). For the last two years Ahlmann was unbeatable at the Leipzig leg, and when he took the lead with a superb run from his sensational young stallion, Dominator 2000 Z, in 33.77 seconds  it seemed he was about to make it three-in-a-row.

But course designer, Frank Rothenberger (GER), had given them a tempting but testing short-cut option on his jump-off track and Ahlmann didn’t take it. Second to go, Sweden’s Douglas Lindelow (SWE) and Casquo Blue did when turning inside the Longines oxer to get to the double, now the third fence on the course, only to hit the bogey penultimate oxer for four faults. Just three more would try the shorter route and Lynch was next, making it look very smooth and easy as he cruised into the lead in 33.16 seconds when ninth to go.

Switzerland’s Bryan Balsiger (SUI), winner of the opening WEL leg in Oslo (NOR) in October, also took his chance when third-last into the ring, but his mare, Twenty-two Des Biches, stopped at the first element of the double. And it was tough luck for Britain’s Robert Whitaker (GBR) and Catwalk, winners at the second leg in Helsinki (FIN), when they took all the risks in the quickest time of 32.01 seconds only to leave the second-last on the floor to finish ninth.

Lynch was really pleased with his win, and with GC Chopin’s Bushi which he has been competing since last summer.

“I bought him untried, on the recommendation of Bertram Allen, and we’ve had our ups and downs. He’s thrown the toys out of the pram a few times on me, but we changed a few things and he was very good at La Coruña last month and in Basel last weekend. It’s incredible to bring him here and win. We needed to improve our relationship and to learn to trust each other more, and we did that today so I’m delighted!”, he said.

Runner-up Ahlmann was also very happy with the eye-catching 10-year-old Dominator whose raw power drew gasps from the crowd in both rounds. “He was amazing! I didn’t take the inside turn to the double because he isn’t experienced enough yet and you had to do it today to win but he is really developing and will be one to watch in the future. He was breeding a lot when he was young and that’s why he didn’t jump so much as a young horse. It’s too early to talk about the Olympics but we will see”, he said.

Lynch is thinking ahead to the Longines 2020 Final. “It’s always been on my agenda, I’ve been campaigning for a place at the Final since last year so I’m really looking forward to it now”, he said. And he believes the Thomas & Mack arena in Las Vegas will suit GC Chopin’s Bushi, so the gelding may well be his chosen ride.

“He likes to go like a big pony. I realise now that if I leave him in his rhythm he can jump anything. Today when I was walking the course for the first round I walked that jump-off turn-back and I thought it was definitely on. And he did it easily…” he pointed out.

There are now just three Western European League legs remaining, at Amsterdam (NED) next weekend where the Irishman also plans to compete, at Bordeaux (FRA) the following weekend and in Gothenburg (SWE) at the end of February following which the top-18 qualifying spot will be decided.