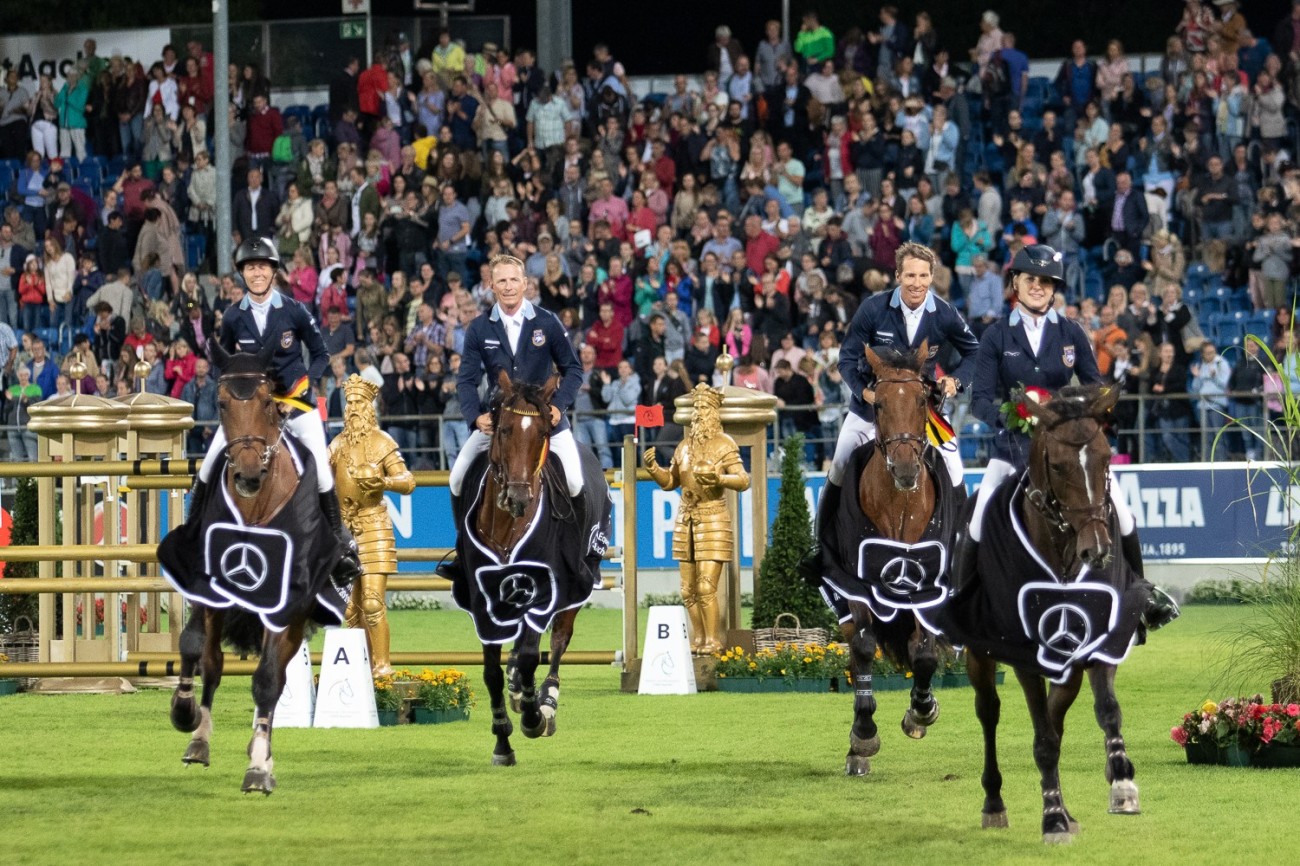 Aachen, Germany – July 19, 2019 – There are moments in life when a few hundredths of a second can really hurt. In the €250,000 Mercedes-Benz Nations Cup CSIO 5* the German team experienced one of those moments, whilst Sweden celebrated a perfect victory thanks to a superb round by their European Champion.

Sweden finished on an overall score of 4 penalty-points to claim the victory in the 2019 Mercedes-Benz Nations Cup CSIO 5*. One single time fault from the first round prevented the German team from celebrating their fourth triumph in succession.

After the first four riders all jumped clear, everyone was amazed: Had the course design Frank Rothenberger (GER) underestimated the horses and riders that much? Not at all. It turned out that on the contrary he had done a perfect job. 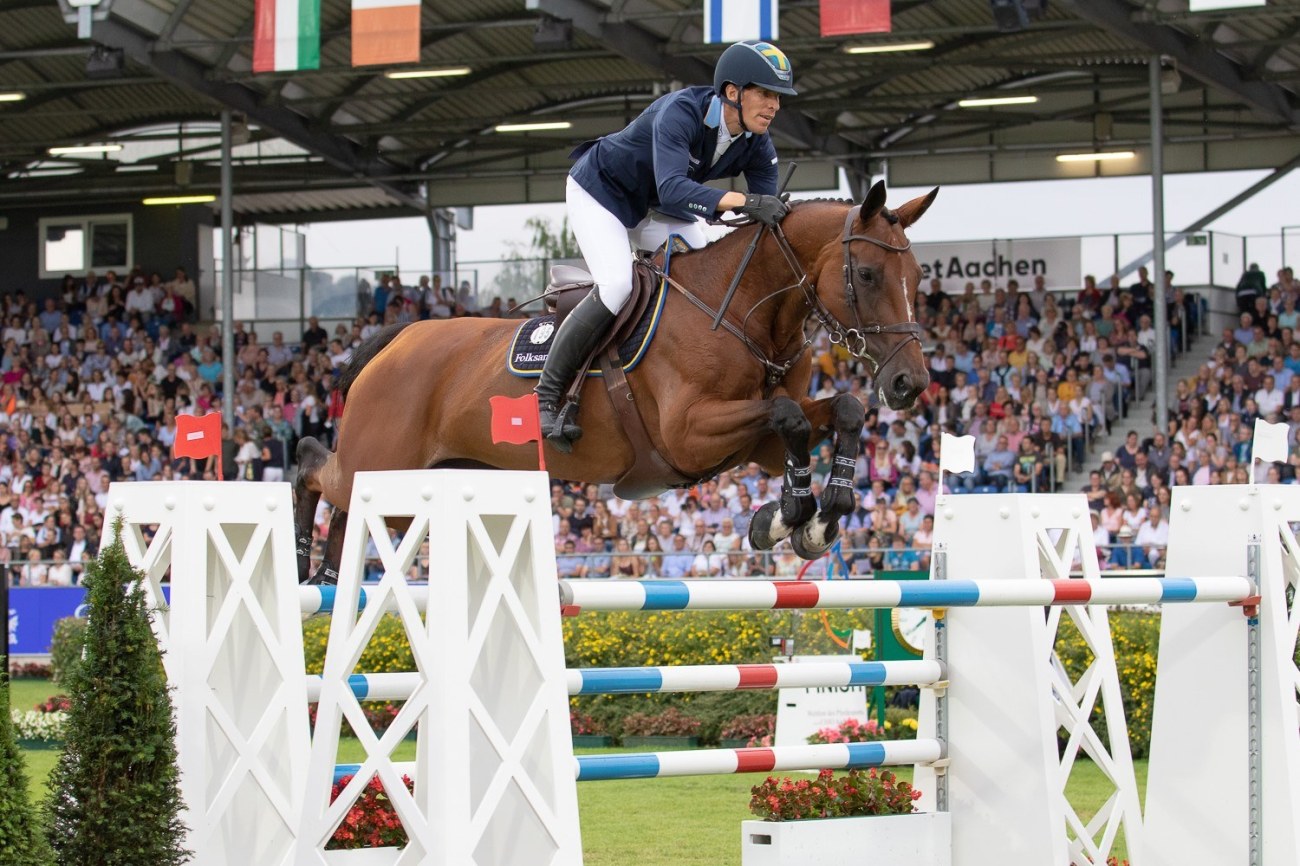 Henrik von Eckermann (SWE) kicked off the competition with Toveks Mary Lou for Sweden, the pair that will enter the ring on Saturday in the Rolex Grand Prix CSI 5* as contenders for the Grand Slam, after they won the Rolex Grand Prix CSI 5* in s’ Hertogenbosch. If the mare jumps like she did last night, their chances of picking up an extra bonus are pretty good. The Westphalian-bred Montendro daughter jumped superbly. But the same also applied for the first German pair, the World Champions Simone Blum (GER) and DSP Alice: Clear round and the Soers exploded.

Next in the ring for Germany was the “Nations Cup returnee”, Christian Ahlmann (GER), who like Daniel Deußer (GER) was representing the team for the first time since 2016, after they both recently signed the athlete agreement of the German Olympic Committee again.

Ahlmann’s Clintrexo Z put in a fantastic performance. Up until the last fence, where the pole fell. In retrospect Ahlmann explained: “I was a bit worried that we wouldn’t make the time. So, I rode a little faster to the last obstacle. Then I wanted to pull him a bit, but he didn’t react the way I thought he would. The take-off to the last fence was right, but we didn’t have enough momentum and we knocked the top pole.”

Daniel Deußer (GER) was the next one to ride for Germany with the twelve-year-old, Chacco Blue son, Calisto Blue. He flew over the course in huge leaps and reached the finish line clear. But unfortunately, he picked up one time fault and one already speculated that this could be decisive, which ultimately turned out to be the case.

Like Christian Ahlmann (GER), Marcus Ehning (GER) also picked up four penalty-points at the last fence with his self-bred Funky Fred. After the first round five teams were all on a total interim score of four penalty-points and Germany was lying in sixth place behind them on five faults.

The course designer, Frank Rothenberger, raised three of the fences before the second round, this time the riders started in reverse order. The combination between the higher fences, the growing darkness and the floodlights and the dwindling strength of the teams evidently faced the teams with new challenges. More and more mistakes were made, including also refusals. The Swedish team on the other hand remained constant and the German riders also put in excellent performances. 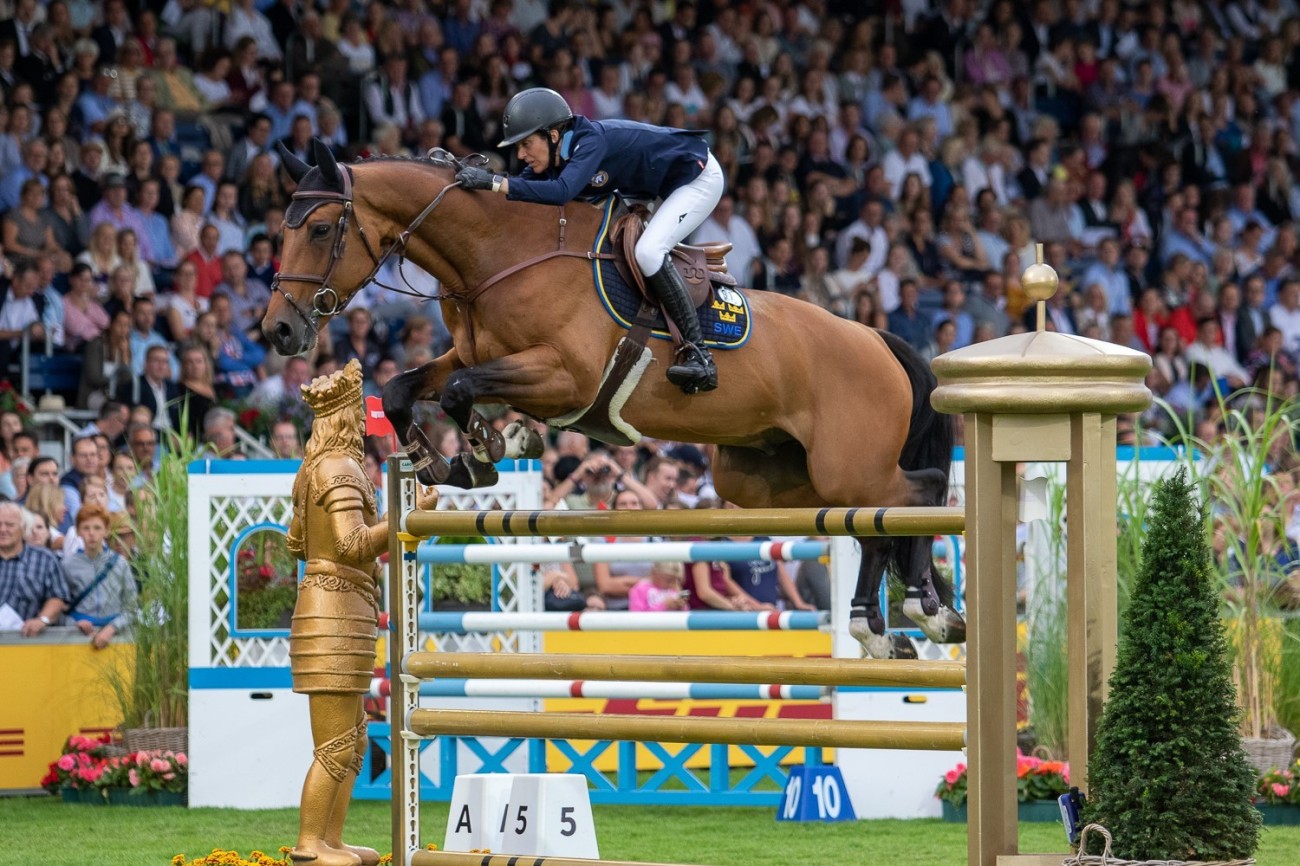 Henrik von Eckermann (SWE) and Toveks Mary Lou jumped double clear. The newcomer Angelie von Essen (SWE), who runs a training and sales yard in England and who was competing at the CHIO Aachen for the first time after 16 years also jumped clear with her AES gelding, Luikan Q. 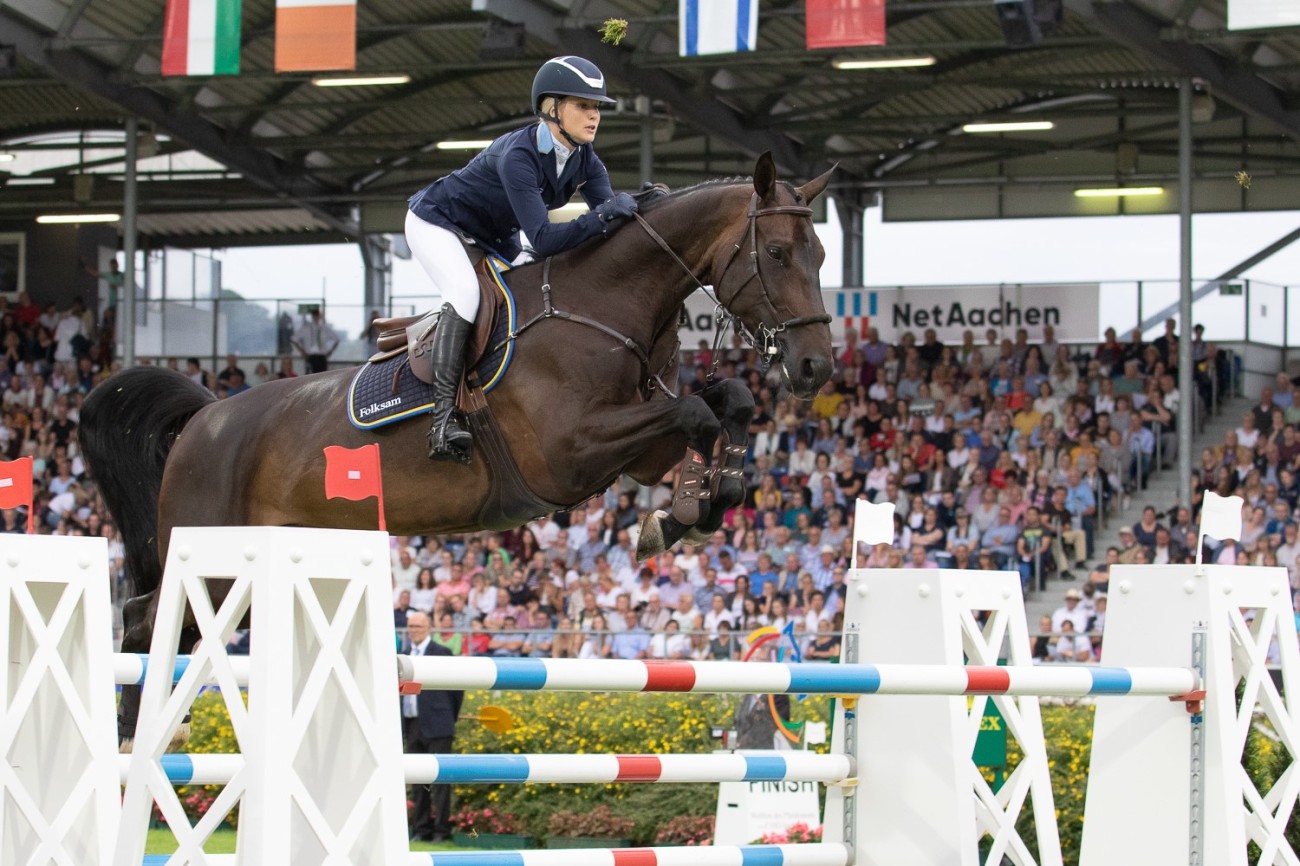 After jumping clear in the first round, the youngster of the Swedish team, 26-year-old Evelina Tovek (SWE), picked up four penalty-points in the second round with Dalila de la Pomme.

And the German riders? Simone Blum (GER), Christian Ahlmann (GER) and Daniel Deußer (GER) were all clear. As of a result, Marcus Ehning (GER) didn’t need to ride again, because he wouldn’t have been able to improve the team’s result. It would all depended on the performance of the other teams. 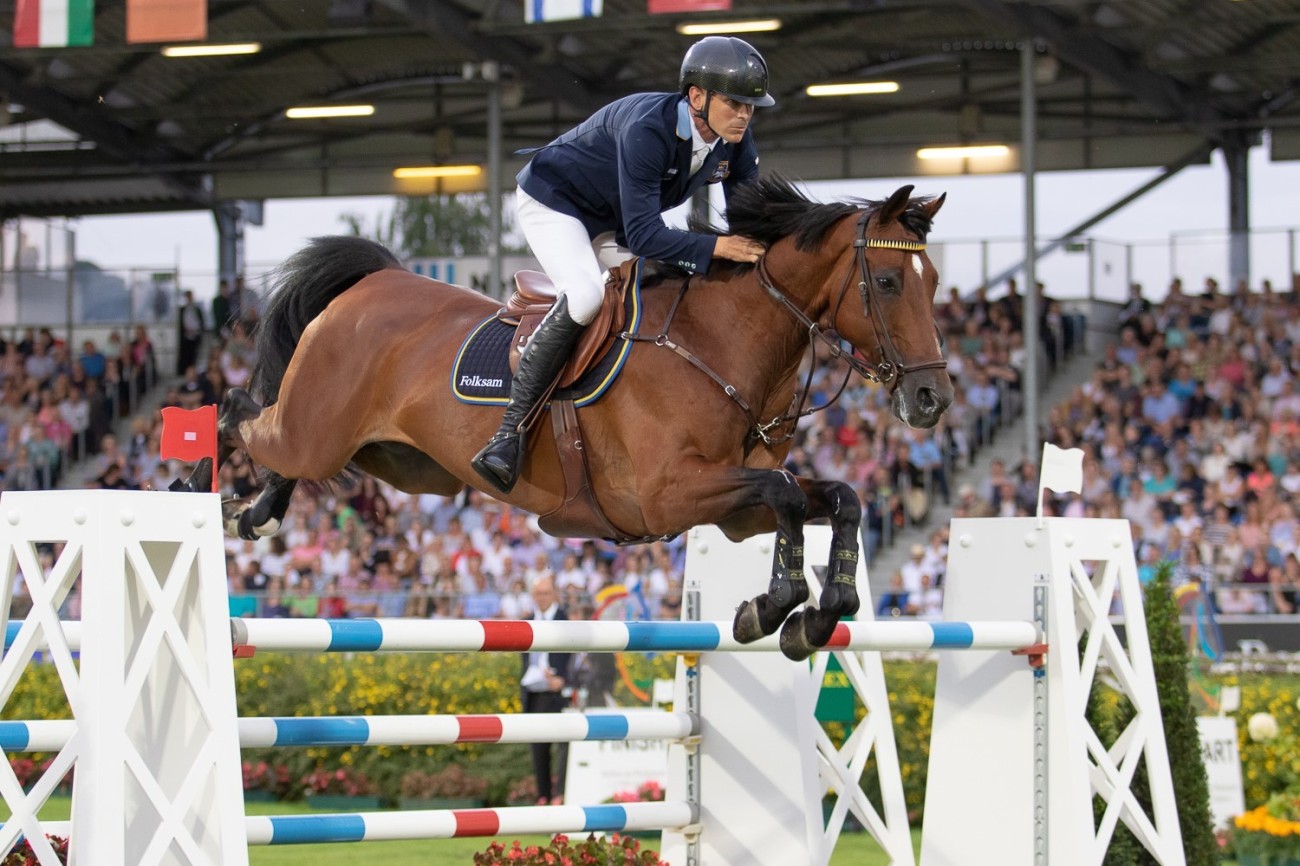 Ultimately, the Swedish European Champion of 2017, Peder Fredericson (SWE) and his Namelus R son, Christian K decided the outcome of the Mercedes-Benz Nations Cup. Everything started well for them, but then they had a few hairy moments, like when the gelding fell into trot in middle of the triple combination.

But luck was on their sides and miraculously none of the poles fell, zero penalty-points. That meant the victory for Sweden and second place for the German squad. The crowd celebrated the Swedes with standing ovations and cheered just as loudly for the Germans. 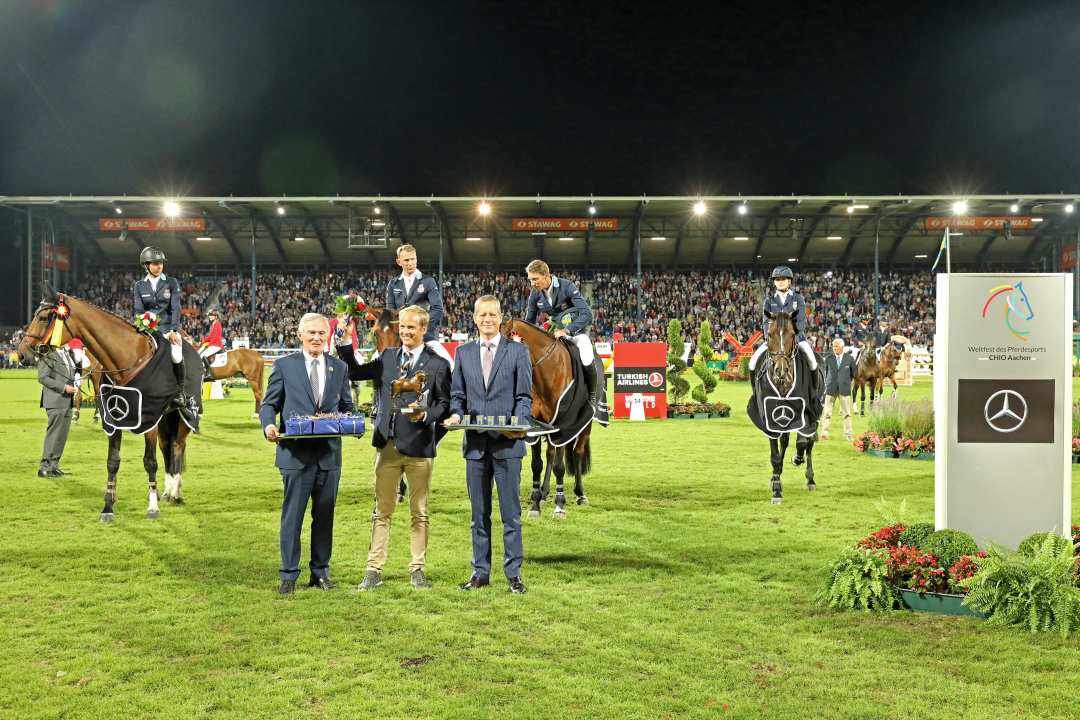 So, it was hardly surprising that Dr. Carsten Oder, Chairman of the Executive Board of Mercedes-Benz Cars Sales Germany, explained: “It is an honour for us to have been the partners of the CHIO Aachen for 65 years.”

Christian Ahlmann (GER) was visibly stirred after his comeback as a member of the national team: “It is something very special when you enter the ring and it is that quiet you could hear a pin drop. It is better than any Championships!”

And Marcus Ehning (GER), who contributed to all three Nations Cup victories in the past years added: “I am very glad that the two of them are on board again! I don’t want to undermine the performances of the riders of the previous years, but no team in the world can afford to do without such riders!”