In the STAWAG-Prize, a speed competition, Pius Schwizer (SUI) and his 13-year-old Oldenburg gelding, Chaquilot (Chacco-Blue x Quilot), raced across the finish line of the 1.50-metre course built by the course designer, Frank Rothenberger (GER), in a time of 63.46 seconds. One other pair was actually even faster, but unfortunately, they were disqualified.

“It really was a very fast jumping class,” stressed Pius Schwizer (SUI), while at the same time admitting that there was one other rider, who had actually beaten his time: The French rider, Roger-Yves Bost (FRA), with Sunshine du Phare. 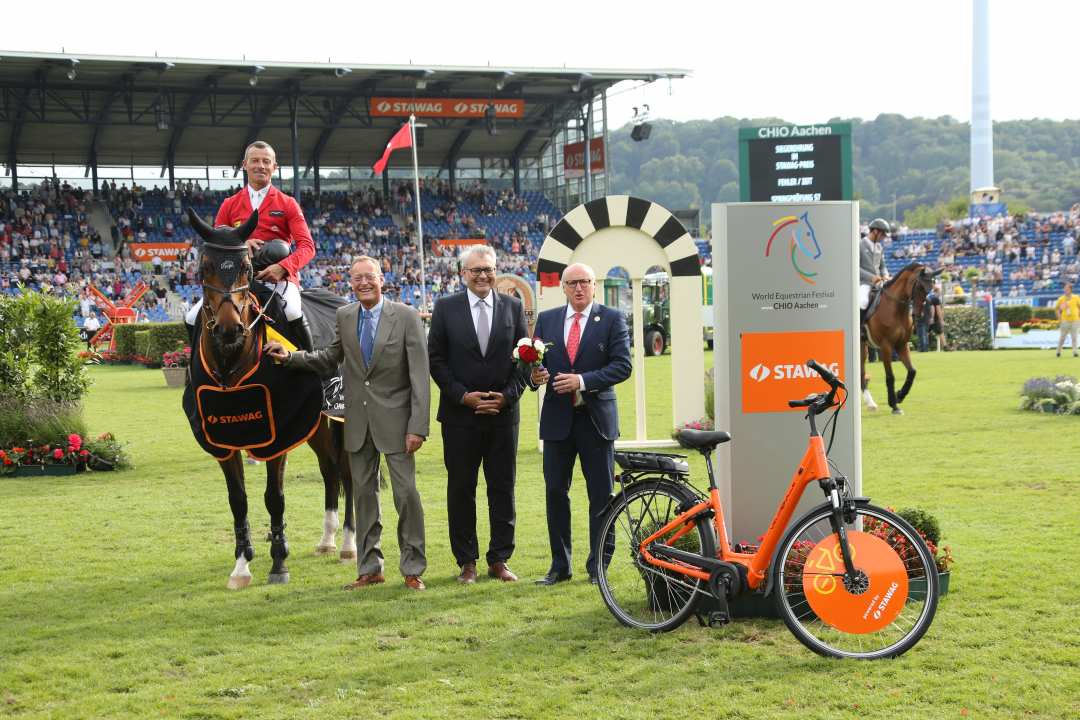 However, during the examination by the veterinarian after the ride, it turned out that the chestnut horse had blood on his flank. This led to his disqualification in accordance with the regulations. That meant the victory for Schwizer, who was full of praise for his four-legged partner, whom he has only been riding since the start of the year: “He is a true speed specialist, very careful and he has a super attitude!”

This has brought Chaquilot and Schwizer in the short time they have been together (he was previously ridden by the German show-jumper Philipp Houston (GER) three golden rosettes and placings under the top ten in almost every class.

Philipp Weishaupt (GER) has had a fantastic show so far with two victories and a second place. His ten-year-old Hanoverian-bred Coby 8 by (Contagio x Escudo 19) won two of the rosettes. A gold one for winning the Prize of StädteRegion Aachen yesterday and a silver one this timer for finishing second in the STAWAG-Prize with a clear round in 64.49 seconds. Coby was obviously listening yesterday when his rider said he has the feeling the gelding is destined for greater tasks!

Behind Philipp Weishaupt (GER), the winner of Rolex Grand Prix of Aachen in 2016, came Gregory Wathelet (BEL), who won the Major here in 2017. The Belgian and Iphigeneia de Muze (Erco van’T Roosakker x For Pleasure) left all the poles up for no penalties and stopped the timers at 65.09 seconds for bronze honors.