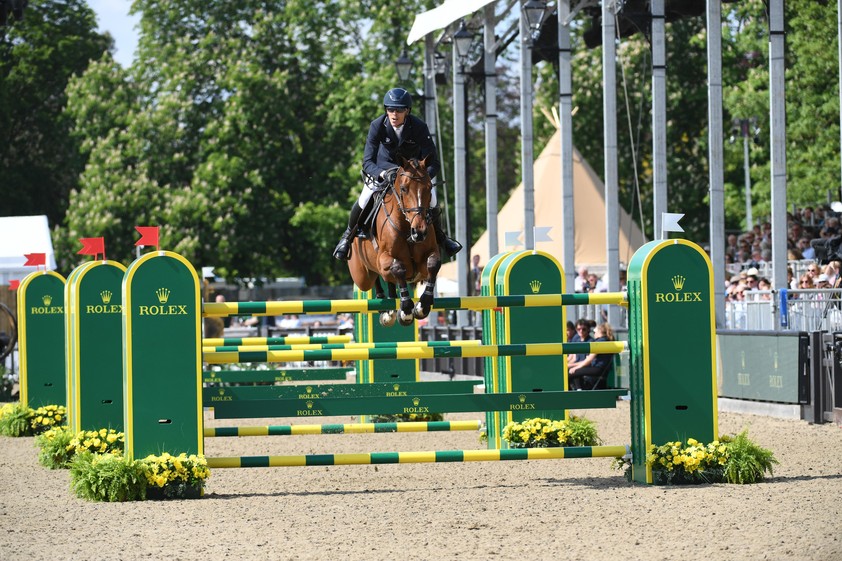 After winning the €900,000 Rolex Grand Prix CSI 5* at the Dutch Masters, Henrik von Eckermann (SWE) not only took the lion’s share of the jackpot but also became the live contenter for the Rolex Grand Slam of Showjumping. The Swede was interviewed about several aspects of his career and the answers were very interesting.

Can you talk about your background and how you got into riding?

My parents were farmers and although they were not competing with horses, my mother had one or two horses that she would ride in the forest. My parents would go to Gothenburg Horse Show every year and when I was younger, I would go with them and think about how much I would love to compete there one day. I always loved being around animals and horses on the farm, so I suppose this is how it all started.

Can you describe your first pony?

My first pony was a Dales pony named Golden Chance.

What’s been the highlight of your career so far?

It’s difficult to say to be honest, my latest highlight was of course winning the Rolex Grand Prix at The Dutch Masters, but there have been so many highlights. It depends where you are in your career. I have so many memories from my first international show all the way to ‘s-Hertogenbosch. But of course, to win a Grand Prix was one of my main lifetime goals.

At The Dutch Masters what was going through your mind when you realized you had won the Rolex Grand Prix?

Steve went before me and when I saw his round I thought: “Ok, I know I can beat him.” After that, there were still two or three people to go and when you aren’t last to go into the arena, you just never know what could happen. I have been second so many times. At the Geneva Grand Prix, Kent beat me, and I was second again, so I was really happy to be able to win this one.  It was hard to watch the other people, I was so nervous that I would get another second place.

Looking ahead to CHIO Aachen; how are you preparing for the next stage of the Rolex Grand Slam?

I’m trying to figure out which horse I’ll be riding. It’s still a surprise. I’ve got about 10 weeks, so I’ll need to make a plan.

Do you think the Rolex Grand Slam creates an extra buzz around show jumping?

Yes, it is a fantastic addition to the sport. The Rolex shows are the best in the world and the Grand Slam competitions are the ones that everyone wants to win. The Rolex Grand Slam is the equestrian equivalent to Formula 1 and almost feels untouchable! I don’t know if we will see anyone else do what Scott Brash achieved, my current goal is to win two consecutively, but we will see. For sure it is an amazing incentive.

What have you and Toveks Mary Lou been doing since you won in March?

We have done a couple of shows, the first one was the FEI World Cup™ Final, in Gothenburg but it didn’t quite go the way we had wanted, so that has been forgotten. She’s now had a bit of a break, Royal Windsor was her first show back and she did so well, we are so pleased!

You’ve had an amazing year with Toveks Mary Lou – what makes her such a special horse?

She is a winner. She has a fantastic fighting spirit when she goes into the arena. She always gives that little bit extra and she always knows that she needs to perform on the day.

What is she like both in the ring and at home?

Very different. In the stables, she is very quiet and just enjoys her life, but when competing she can be very sensitive. Her mood changes a lot. At home she’s much more relaxed and doesn’t get spooked easily but here at the show she is much more alert, like she’s running under electricity. You really have to watch out and she definitely keeps me on my toes!

Can you talk about your team, including everyone who supports you both at home and when competing?

From the beginning, there was Karl Schneider, he owned a farm and he originally owned Mary Lou. At this farm, with Karl, that’s how it all started. Luckily, we had this horse that I believed in from the beginning. Of course, the Toveks, who own Mary Lou, they guaranteed that I could continue riding her, so that was really important. And then, of course, there are all of my grooms at home at the stables. They take such good care of Mary Lou, she is so special you know, something could easily happen to her and because I can’t be with her all the time I am so grateful for their support. At the end of the day, I have a fantastic team. Finally, my girlfriend, she keeps up with my bad days and my good days. I have been so lucky in that way. When you start off on your own you realise how important it is to surround yourself with good people.

What is the hardest part of your job?

Things beyond your control can happen and result in you not achieving your goals sometimes. Horses get injured and I think that’s the hardest part, knowing the risk that something could always happen.

What’s the best part of your job?

So many things. Just to be able to do what we do with these animals. To be able to communicate with them in this way, it becomes a partnership. Winning is a very small part of it all. It’s the journey that is so important. At the end of the day winning is just a crown. It’s never the same, every day is different. There isn’t any other sport like it. Some days are great and some days you end up falling in the mud.  You never know what could happen.

If you weren’t a professional rider, what would you be?

I think I would have liked to be an ice hockey player!

What age did you think “I want to be a professional rider”?

As soon as I started riding. I played lots of different sports as a child and I was very competitive, always wanting to be the best. As soon as I felt like I wasn’t good enough, I would stop and move on to the next one. I then found the one in equestrian sport, it just worked! If you saw me riding when I first started though, you probably would have thought I would never be a professional rider, I didn’t have the skills straight away, but I had the right mind-set, which is so important.

You’ve been mentored by Ludger Beerbaum in the past. How would you mentor a younger rider under your wings?

I have one student, Evelina Tovek. It was very different before I had a student – I was only thinking about my own riding and nothing else. But now I have a student who is young and who is also a competitor of mine. But it’s amazing, it keeps everything balanced in a way and gives me something else to focus on. If something goes wrong for me but goes well for her then that’s great. There are not many other sports where you help your competitors and give them tips.