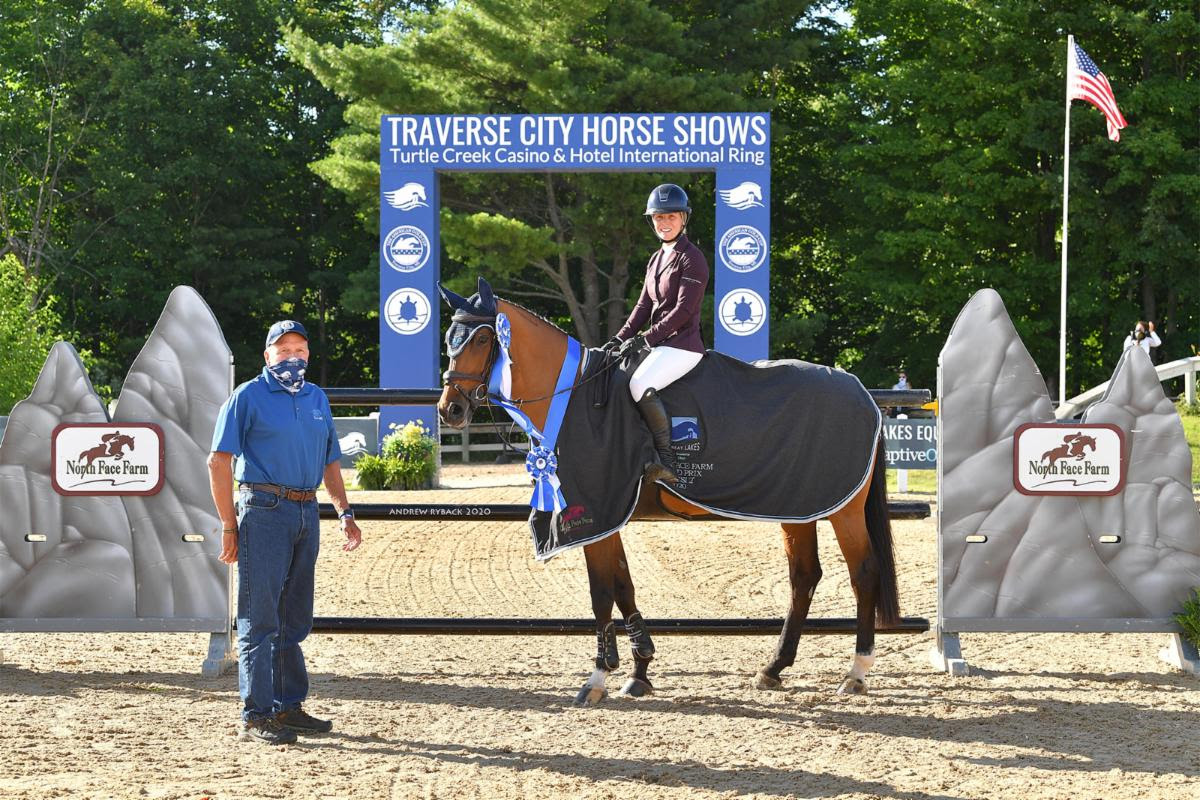 Traverse City, Mich. – July 19, 2020 – Sunday of Week Three of the Great Lakes Equestrian Festival, presented by CaptiveOne Advisors LLC, was the halfway point of the six-week series, and show jumpers marked the occasion with a series of top-tier performances in the $72,900 North Face Farm Grand Prix CSI 2*. Hailing from nine nations, including Argentina, Chile, Canada, Great Britain, Ireland, Hungary, Israel, Turkey and the United States, 52 entries battled for the top honors throughout the afternoon. Bearing the flag for Great Britain, Amanda Derbyshire (GBR) and Gochman Sport Horse LLC’s Luibanta BH turned in the best jump-off performance of the day as the final challengers during the tie-breaker round to emerge victorious and earn valuable points towards the CaptiveOne Advisors $30,000 Leading Jumper Rider Bonus.

Aiming to improve their chances at victory and larger prize money earnings, a number of riders had entered two mounts in the class, giving them an edge over course designer Anderson Lima’s (BRA) 16-effort track strategically positioned across the Turtle Creek Casino & Hotel International Ring. One of those athletes was Capt. Brian Cournane (IRL), who turned in the first penalty-free ride of the class as the ninth in the start list aboard his first horse, Penelope Cruz. Soon thereafter, Jacqueline Steffens (CAN) rode to a clear trip with Freaky Liefhebber to force a jump-off, and she was joined in the clear ranks by Rich Fellers (USA), Gavin Harley (IRL), Adam Prudent (USA) and Alison Robitaille (USA) by the halfway point of the round. The second portion of the round saw eight more partnerships add their names to the list as Jacob Pope (USA), Isabella Russekoff (USA), Nicholas Dello Joio (USA), another for Harley, Samantha Kasowitz (USA), Teddy Vlock (ISR), Hunter Holloway (USA) and Derbyshire each left all the rails in the cups within the time-allowed.

With the jump-off field at 14 returners, eligible teams would have to be as efficient and precise as possible over the shortened pattern for a chance to capture victory. Once again serving as the trailblazers, Capt. Cournane and Penelope Cruz set the precedent with a clear ride in 40.69 seconds as the first back in the ring. With only five duos remaining, Capt. Cournane and Penelope Cruz still held the lead, with only one double-clear combination coming within a second of their time. Fellers and Lux Lady did prove that the time could be beaten as they stopped the clock in 40.61 seconds, just milliseconds faster, but downed two rails to incur 8 faults and push them down the list.

The last partnership to challenge the leaders’ time, Derbyshire and Luibanta BH proved to save the best for last as they swiftly sliced across the course, keeping all the fences intact and shaving time off the clock to break the beam in 38.80 seconds and claim the grand prix victory. Capt. Cournane and Penelope Cruz, owned by M/M Robert Stiller, finished in the overall runner-up spot, and Prudent rounded out the top three spots aboard Plain Bay Sales’ Baloutine in 41.190 seconds as the third-fastest of only four double-clear duos.

Headed into Sunday’s grand prix, Jonathan Corrigan (IRL) held the lead by a slim margin in the CaptiveOne Advisors $30,000 Leading Jumper Rider Bonus, and he retained that status by the conclusion of the day. Corrigan has led the rankings since he won both two Welcome Stake classes during the Traverse City Spring Horse Show, presented by Turtle Creek Casino & Hotel. Following 11 weeks of riding in Traverse City, the rider who earns the most points in classes offering $25,000 or more in prize money will be awarded the grand prize after the $213,300 CaptiveOne American Gold Cup Grand Prix CSI 4* on September 13.