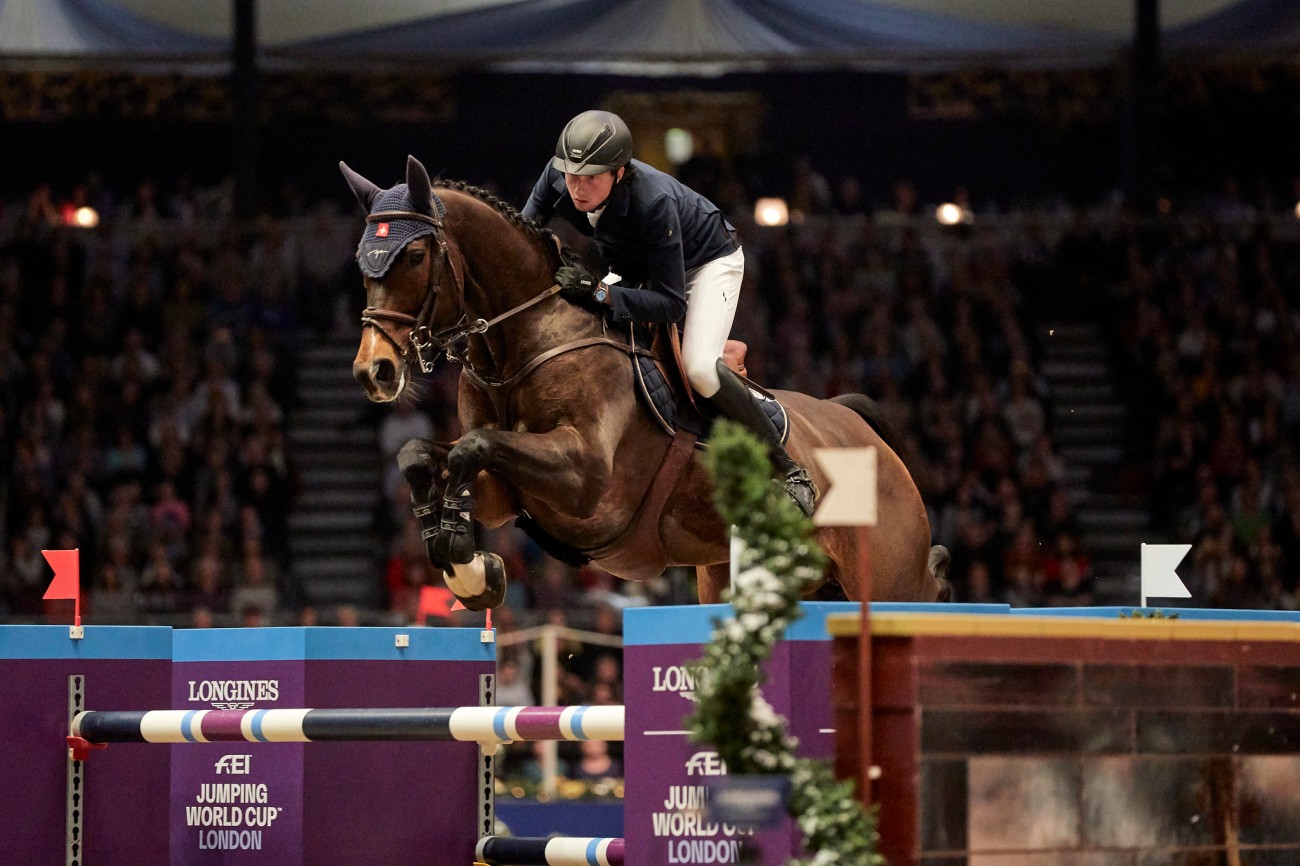 Partnering his top ride, the lightning-fast grey Clooney, Fuchs took the third leg in Lyon (FRA) by storm last month, and in today’s eighth round of the 14-leg series he galloped to victory with a stunning performance from The Sinner. He’s the reigning European champion, and looks set to take over the No. 1 spot on the Longines World Rankings as 2020 gets underway after an incredible run of recent form.

Today, he also became the first Swiss winner of the Olympia leg of the FEI World Cup™ series in 29 years. The 27-year-old rider wasn’t even born when his uncle, Markus Fuchs (SUI), stood top of the podium at the London fixture back in 1990.

Just six horse-and-rider combinations made it through to today’s jump-off, and Fuchs was fulsome in his praise of Irish course designer, Alan Wade (IRL). “The first round wasn’t crazy big, but Alan set a great course as he always does – it was another of his masterpieces!” the winning rider said.

It was definitely no walk-in-the-park, with the relatively small Olympia arena jam-packed with fences and an intense atmosphere in the packed Grand Hall adding to the pressure. Only six of the 37 starters qualified for the deciding round but it was a classic, Fuchs, who was second to go, putting it up to the rest with a great ride aboard the 11-year-old bay Oldenburg gelding (Sanvaro x Landgold 3) that saw him take a brave turn to the wall, now the fourth fence on the track, and a super-tight line to the penultimate oxer followed by a great gallop to the last. Throwing down a time of 31.99 seconds he then sat back and watched the remaining four give it their best. 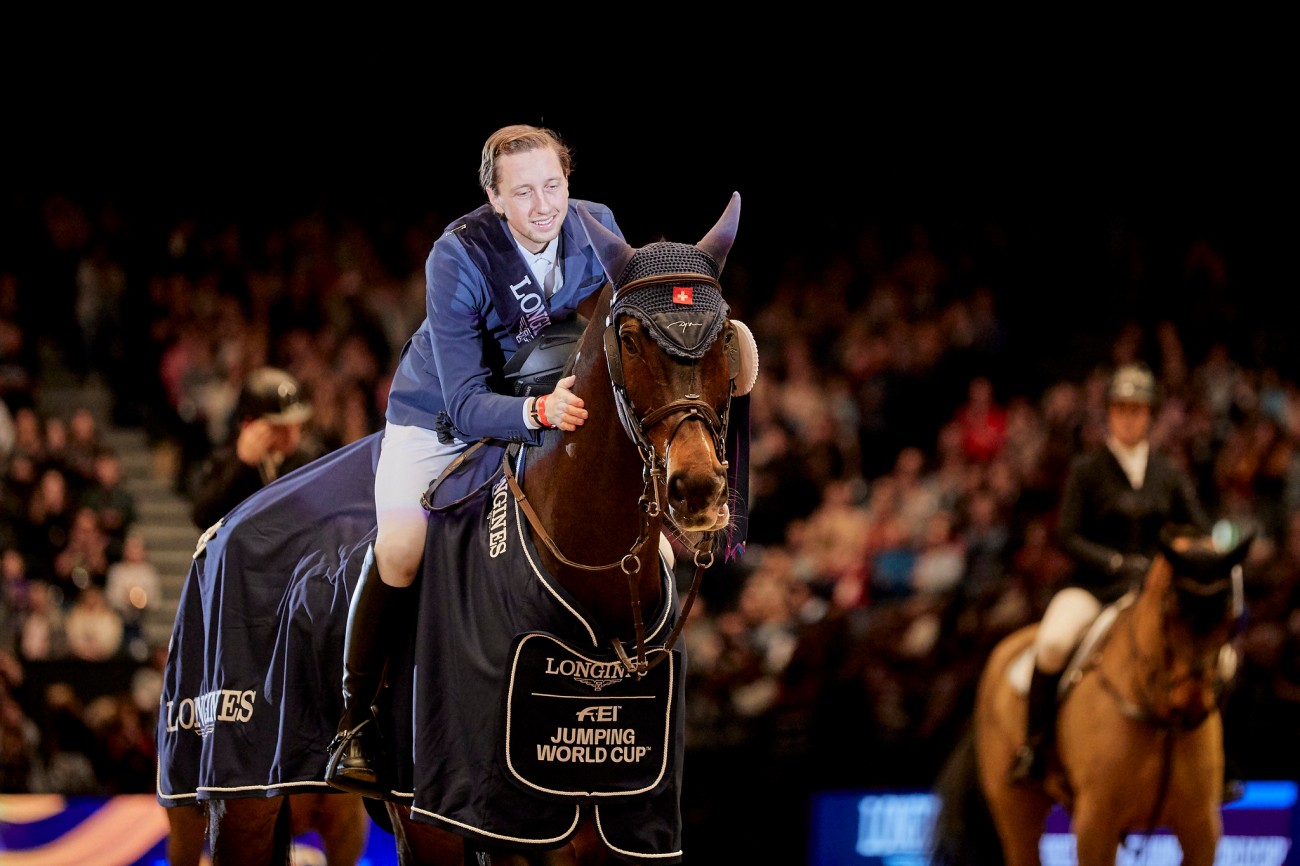 Austria’s Max Kuhner (AUT) followed with an extraordinary second clear from the hugely promising eight-year-old gelding Elektric Blue P (Eldorado v.d. Zeshoek x For Pleasure), but their time of 33.83 seconds was no threat. However as German ace, and three-time FEI World Cup™ champion, Marcus Ehning (GER) set off with Cornado NRW he clearly meant business only to get too close to the penultimate oxer for four faults in 32.17 seconds. 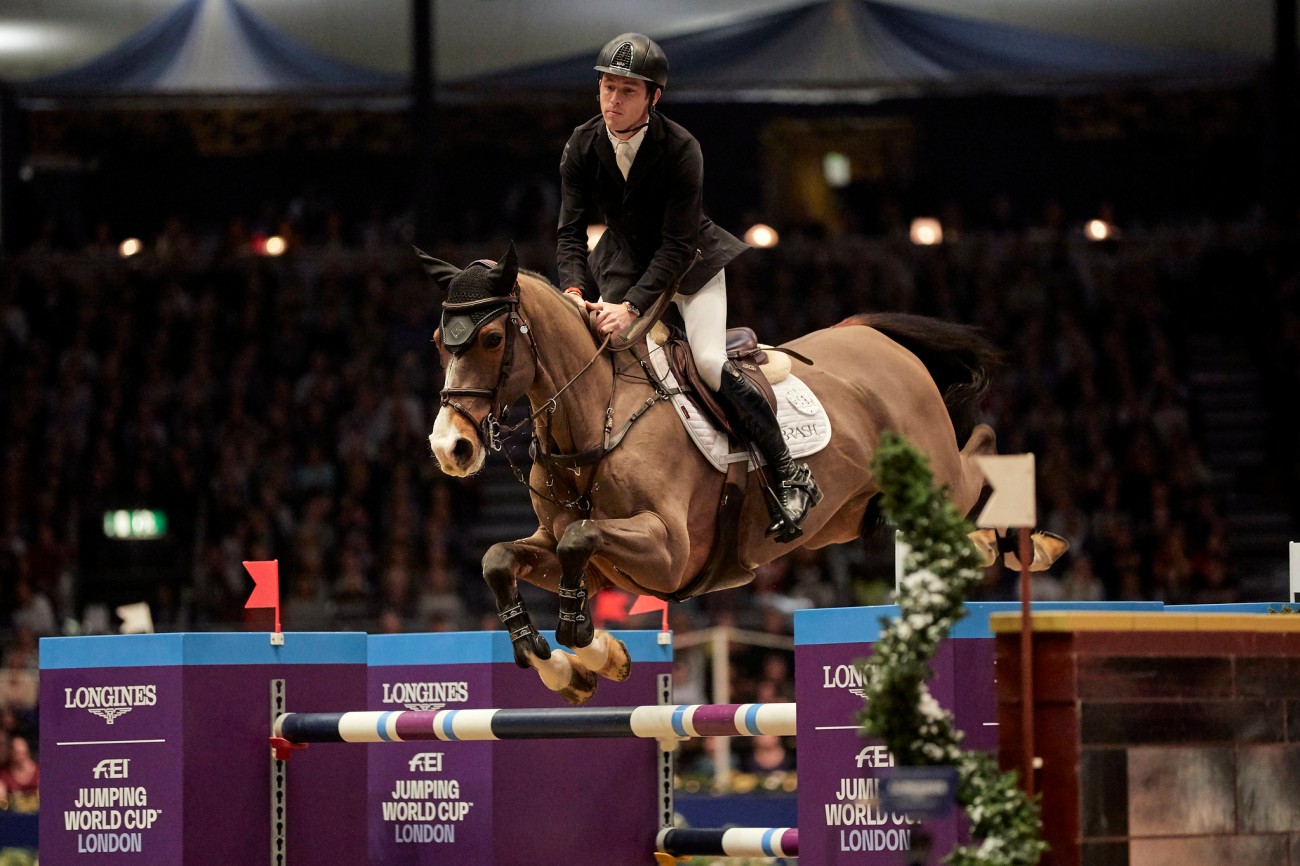 Great Britain’s Scott Brash (GBR) decided today was the day to put some jump-off pressure on his latest shining star, the 10-year-old Hello Jefferson (Cooper vd Heffinck x Irco Mena), but when the second fence fell then there was only Niels Bruynseels (BEL) and his 10-year-old Delux van T & L standing between Fuchs and victory. 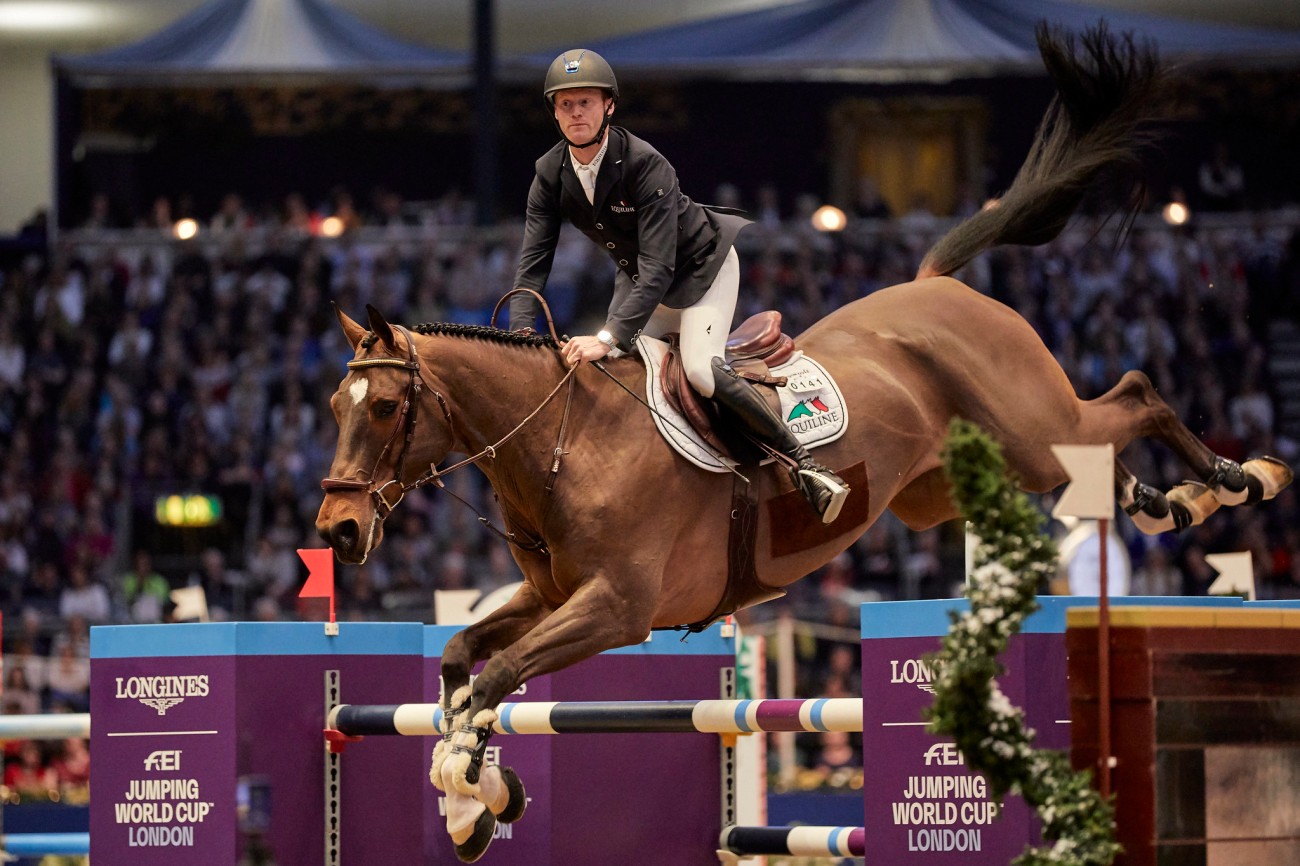 And for once things just didn’t go his way, none of the distances coming up nicely for the brilliant Belgian and his big horse with a long stride, so they stayed clear but had to settle for third place behind Kuhner in second and Fuchs at the head of affairs.

“I was early to go so I had to take all the risks to put the pressure on the others and everything worked perfectly today!” Fuchs said. He was of course delighted with The Sinner who belied his name this afternoon. “It was Denis Lynch (IRL) who gave him his name and he was already a good horse for Denis”, he explained. He’s had the 11-year-old gelding since the beginning of the year and they made their first major appearance together at CSIO Rome in May. 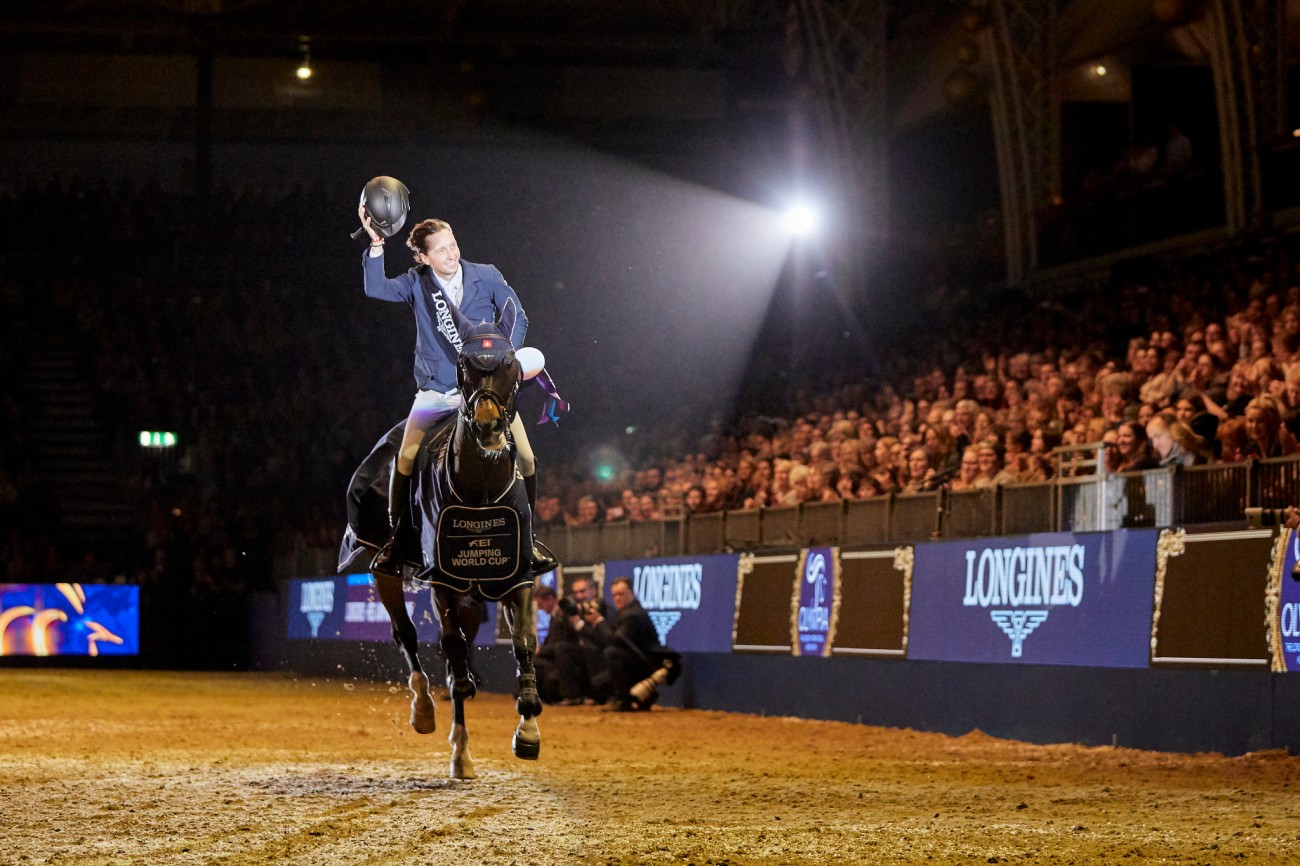 “At first I found him difficult to ride, but now we definitely have a better partnership, he has better rideabililty and we know each other a lot better now”, he pointed out. And The Sinner can look forward to some nice sunshine as he heads to Wellington, USA for the Winter Equestrian Festival with his rider in the new year.

Having moved into fourth place on the Western European League table after today’s brilliant result, Fuchs is now well qualified for the Longines 2020 Final in Las Vegas, USA next April and his biggest headache will be to decide which horse to take – his wonder-horse Clooney or his latest star, The Sinner. His uncle, Markus Fuchs, was runner-up at the series Final in Las Vegas in 2000 and was crowned champion with the great Tinka’s Boy the following year in Gothenburg, Sweden. Martin was runner-up to compatriot Steve Guerdat at the 2019 Final which was also staged in Gothenburg, so could history be about to repeat itself over the coming months?….

For the rest, the next opportunity to collect those precious points will be at the ninth leg of the series in Mechelen, Belgium on Monday 30 December.