Barcelona, Spain – October 05, 2019 – There was a mixture of joy and regret for the Spanish team after winning last night’s €300,000 Challenge Cup CSIO 5* at the Longines FEI Jumping Nations Cup™ Final on home ground at the Real Club de Polo in Barcelona, Spain.

The battle between the nine countries that missed the cut to tomorrow’s last round that will decide the fate of the 2019 Longines title was a tough one. But the hosts clinched a clear-cut victory in the end, pinning The Netherlands into runner-up spot while Brazil, Great Britain and the USA finished equal-third.

“We lost out on Olympic qualification by less than half a second on Thursday, and that was heartbreaking”, said Spanish Chef d’Equipe Marco Fuste. “But sometimes what the sport takes away, the sport gives you back. Today we had this wonderful win and I’m absolutely excited and proud of the riders, the staff members, the coach, the vet, everybody who worked hard, because in the end this was a really beautiful gift to say goodbye to the 2019 Nations Cup season!”, he reflected. 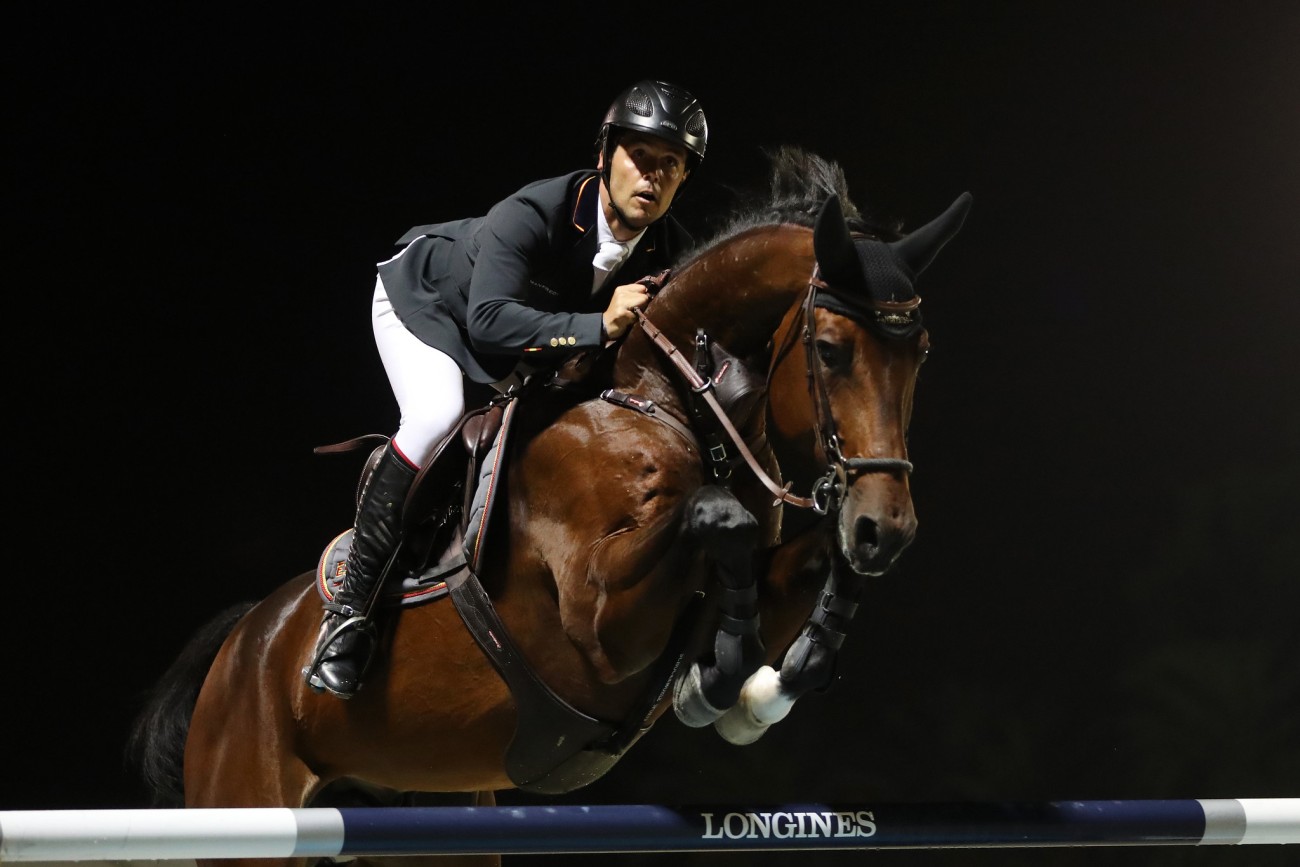 Course designer Santiago Varela set them a difficult track, and there were only six clear rounds from the 36 starters. But when two of those came from Spanish team then that was the deciding factor. And it was the last-to-go effort of Sergio Alvarez Moya (ESP) and the exciting nine-year-old Jet Run that clinched it.

Great Britain, USA, The Netherlands and Spain were all in contention for a four-fault finishing result going into the last rotation of riders, but mistakes from Ben Maher (GBR) and F One USA at the second element of the double at fence eight and again at the final vertical put paid to British chances. And when Richard Spooner (USA) and Quirado RC also faulted at the same double as well as the following oxer then American hopes were seriously compromised.

The Netherlands’ pathfinders, Maikel van der Vleuten (NED) and Dana Blue, clipped only the second fence on the course that looked sensational under lights. And that was followed by a brilliant clear from Zypriz S ridden by Willem Greve (NED) who, as the only rider through to tonight’s competition who had also been foot-perfect in Thursday’s first round, therefore earned all of the €50,000 bonus on offer to riders with double-clear performances.

Marc Houtzager’s (NED) Sterrehof’s Calimero also faulted at the first element of the bogey double at eight, but it seemed the Dutch were about to really put it up to the Spanish by posting just a four-fault finishing score when Bart Bles (NED) and Israel VD Dennehoeve skipped around the course with the greatest of ease, only for it all to unravel at the very last.

The Spanish crowd were suddenly whipped into a frenzy of excitement, because the door was now wide open. The British and Americans were no longer a threat because they would complete on the same 12-fault scoreline as Brazil, and the Dutch could do no better than eight. If last-to-go Alvarez Moya (ESP) could keep a clean sheet then the hosts would have it.

Spain’s Alberto Marquez Galobardes (ESP) and Ucello Massuere had suffered the same fate as Bles at the final fence.

However, team-mate Eduardo Alvarez Aznar (ESP) and Rokfeller de Pleville Bois Margot were beautifully clear, so the 12 penalty-points collected by Santiago Nunez Riva (ESP) and Ucello Massuere could be dropped if their anchor partnership could master Varela’s course.

The deafening noise that had been reverberating around the stadium descended into a complete hush as Alvarez Moya (ESP) and his relatively inexperienced nine-year-old gelding set off. But the sound-barrier was nearly broken when he cleared the last and punched the air with delight.

Asked afterwards if he noticed the silence and could feel the tension as he went into the arena he replied, “I don’t really think much once I go in the ring. I focus on the job and try to ride as good as possible. Once you do that, if you have a rail down that’s the sport – I just try my best. I have to say today it gave me great confidence to have my colleagues doing such a good job before me. And it’s a lovely position to go in the ring with the chance of a win – it doesn’t happen very often so I loved it!”

He wasn’t the only one who savoured this success. “It’s a moment of great happiness!” said Marco Fuste who has been Spanish Chef d’Equipe the last 14 years. “Winning a Nations Cup at this level makes me very happy, especially here in my home town where I have been living for 46 years!”

Last night, the Spanish were celebrating, but today there are two further tasks to be completed. Because the destiny of the 2019 Longines FEI Jumping Nations Cup™ has yet to be decided, and one of three nations – Colombia, Ireland or Italy – will be going home with a ticket to the Tokyo 2020 Olympic Games.

The action gets underway at 15.00 local time so don’t miss a hoofbeat…..