St. Tropez, France – September 12, 2019 – Valkenswaard United’s experienced combination of Marcus Ehning (GER) with Pret A Tout and Alberto Zorzi (ITA) with Cinsey turned up the heat at GCL Ramatuelle, Saint Tropez, in an electric first round of action this weekend.

Spectators were unable to peel their eyes away from the competition, which showcased drama, heartache and glory at almost every moment, producing very few clears – and remarkably, no flawless score for any team. 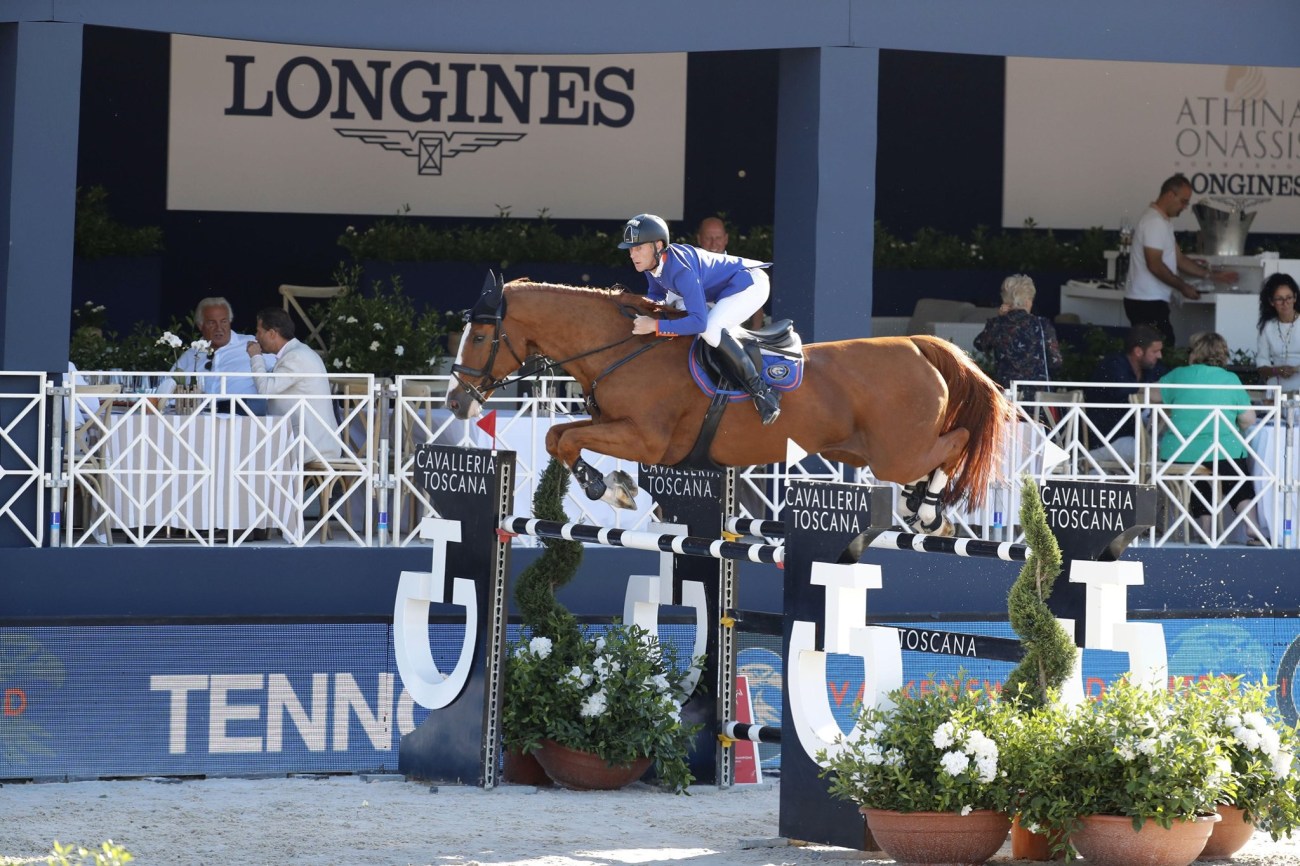 Marcus Ehning (GER) explained after his round: “It’s a tough class today, the last two fences are the ‘joker’ fences. My horse jumped really well, but we still had one rail down. We have the lead so hope we can hold onto it. This is the position we want to be in. It’s always nice to be on the podium, but it’s another big round [on Saturday] so we’ll focus on it and try to do our best. If we are double clear [the other teams] cannot beat us.”

Alberto Zorzi (ITA) agreed: “I’m very happy and the horse jumped very good. Marcus did an amazing round – it was a bit unlucky, but we started well.”

United lead the pack with the home city team St Tropez Pirates also on 4 faults after Olivier Robert and Pieter Devos (BEL) produced an almost perfect round with their horses Tempo de Paban and Espoir. Time faults proved costly for Madrid in Motion’s Eric van der Vleuten (NED) and Maikel van der Vleuten (NED) who came home with a score of 6, despite good jumping rounds from their top horses Beauville Z and Wunschkind 19.

Uliano Vezzani set a twisting, flowing course, with the final line quickly becoming the two bogey fences of the track. A GC plank set before a wide oxer with a water tray underneath caught out riders time and time again as they pushed to meet the tight time allowed of 76 seconds. The course also featured some tricky double combinations, as well as a delicate Longines plank and a light-to-touch Dolce and Gabbana vertical.

As the sun started its slow decent over Pampelonne Beach, whicg is situated just a short walk from the picturesque arena, the GCL teams faced off to put themselves in the best position possible ahead of Saturday’s showdown.

Here’s how the action unfolded…

New York Empire
Scott Brash (GBR) drew the short straw today as first to go around this challenging track. He brought out his speedy 10 year old gelding Hello Mr President, the dark bay horse leaping expressively over the fences. The naturally fast pair flew around the arena, making short work of the time allowed and finishing clear with impressive speed. Teammate Denis Lynch (IRL) brought out his new ride Rubens LS la Silla, the chestnut stallion making his debut under Denis last week in Rome. They were a fraction forward to the slanting double, and the final fence fell too, putting the team on a total of 8 so far.

Chantilly Pegasus
Rene Lopez (COL) brought out his top horse Histoire D O and worked hard to move around the arena. But there was heartache for the pair after the final oxer fell, the red pole falling into the water tray and putting the team on 4 faults. Brother and teammate Carlos Lopez (COL) also fielded his top horse G&C Arrayan, but they came to the white double a touch too tight, both elements falling and adding another 8 faults to their tally. The final fence came down again, the Pegasus team plummeting to a score of 16 overall.

Monaco Aces
First to go for the Aces today was Laura Kraut (USA), the American rider piloting her 10-year-old bay Curious George. But a dropped toe on the back bar of the skinny oxer clocked up 4 faults for the team, before the GC plank also tumbled to drop the score to 8 so far. U25 rider Jos Verlooy (BEL) brought out his formidable stallion Caracas, the experienced 14-year-old grey horse flying around the arena with a buck and a skip between fences. But the Longines plank toppled, as did the GC plank down the final line – a time fault too would put the team on an overall score of 17.

Miami Celtics
Jessica Springsteen (USA) and RMF Zecilie went for a forward-going round, but came in a little too deep to the second part of the LGCT double. The troublesome GC plank also clattered to the ground, and a time fault to add would put the Celtics on a score of 9. With team manager Helena Stormmans watching on, U25 rider Harry Charles (GBR) brought out ABC Quantum Cruise, and they looked on phenomenal form up to the last, the final oxer tumbling to put the team on a score of 13 faults.

Berlin Eagles
Leading off for the Eagles, Christian Kukuk (GER) rode Limonchello NT, the big striding stallion careful around the course. The German rider opted for all the inside turns, knowing his slower-moving horse might not make the time allowed of 76s. They finished clear, but had to settle for 1 time fault, passing the baton to teammate Ludger Beerbaum and Cool Feeling. They had a sticky moment after skidding round the corner to the LGCT double, but managed to regain balance and momentum to clear it. However their luck ran out as the Longines plank fell, as did both fences down the final line, another 12 faults added to their score to put the Eagles on an unlucky 13 penalty-points so far.

Paris Panthers
Darragh Kenny (IRL) brought out a new face for the team, a 9-year-old gelding Billy Dorito. But two fences came down, including the tricky final oxer to drop the team to 8 faults so far. Nayel Nassar (EGY) piloted one of his top horses, the impressive bay gelding Lucifer V, and tackled the first part of the course with ease as team manager Rob Hoekstra watched on. But they too had heartache at the last oxer, both top rails tumbling to put the team on a tally of 12.

London Knights
Overall ranking leaders the London Knights fielded team anchor Ben Maher (GBR) with his 9 year old mare Concona, the liver chestnut horse on springs as she flew around the course. But a small mistake coming out of the double set by the VIP hospitality would drop them to 4, and they too added their name to the list of top riders who had the final oxer down – Ben would finish on 8 faults. Olivier Philippaerts (BEL) brought out his top mare H&M Legend of Love, the fiery grey mare experienced in her 13 years. But that final line would crush their chances of a clear, both fences falling and the Knights dropping to a score of 16 penalty-points.

Prague Lions
Niels Bruynseels (BEL) and Gancia de Muze made short work of the track, the pair looking on song for a clear. However they just clipped the GC plank and it toppled, putting the Lions on a score of 4. Marc Houtzager (NED) came off the corner a touch too tight with Sterrehof’s Dante, the big blue oxer falling to put the Lions onto a total of 8 faults so far. 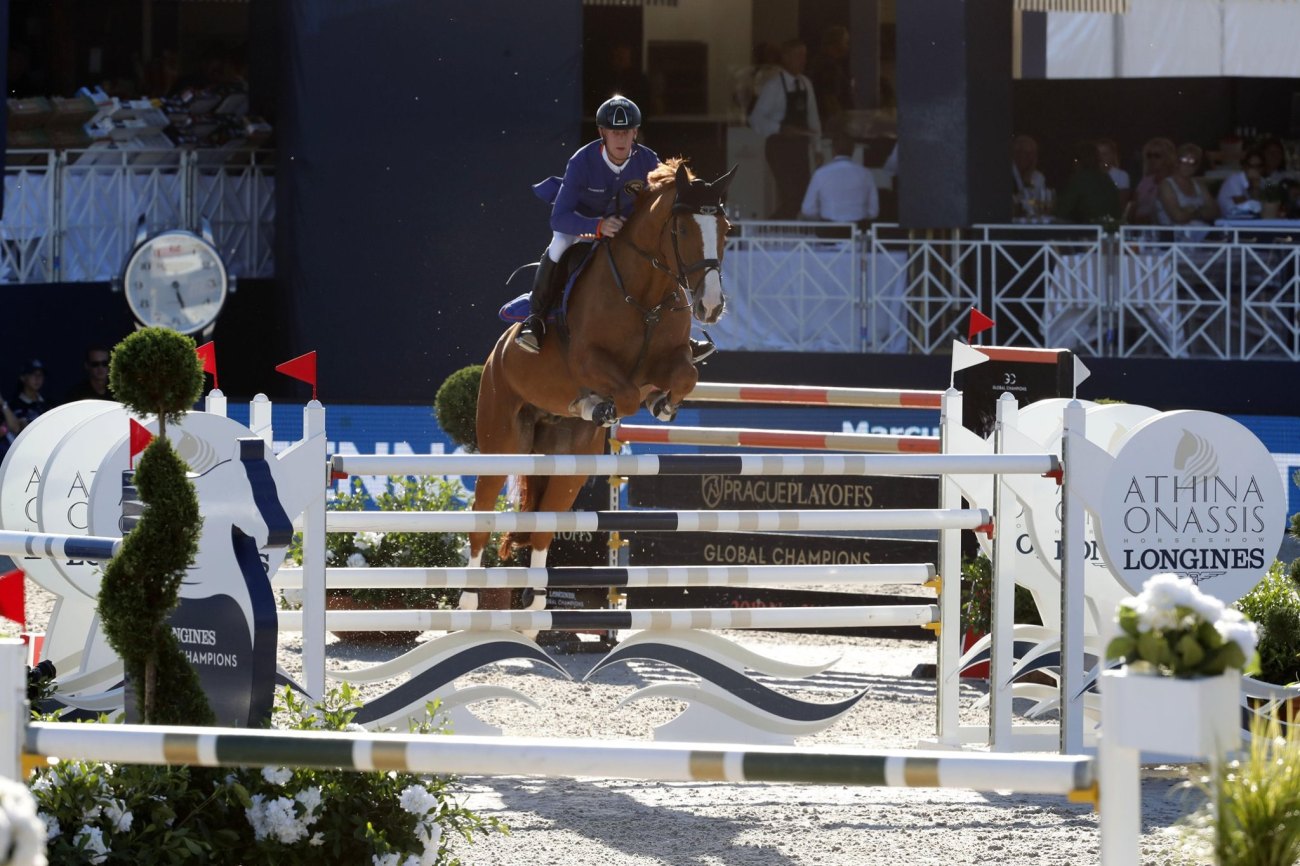 Valkenswaard United
Marcus Ehning (GER) brought out Pret A Tout for the first time this season on the GCL championship, the talented chestnut gelding tackling the course with ease. But 4 faults for the pair would see the team on the backfoot. Alberto Zorzi (ITA) knowing only a clear would keep them in with a chance of leading today.

Piloting the dark bay stallion Cinsey, the Italian guided the powerful horse around the arena, clearing each fence with an expressive flick of the tail. They kept their natural rhythm, and managed to produce the much-needed clear, putting the team into the lead so far with 4 faults overall.

St Tropez Pirates
The home city team St Tropez Pirates fielded Frenchman Olivier Robert (FRA) with Tempo de Paban – the pair opting for a steadier round to give the chestnut gelding as much chance as possible to leave all the fences up. But the GC plank fell, the team dropping to a score of 4. Team anchor Pieter Devos (BEL) piloted Espoir for this round of action, the 15 year old gelding showing all his class and experience to produce the clear. The Pirates would sit on 4 faults, just behind the United team on their combined time.

Hamburg Giants
It would be a first round to forget for the Giants after Simon Delestre (FRA) and Uccello de Will put 8 penalty-points on the board, before Luis Sabino Gonçalves (POR) and Dominka van de Lucashoeve added a further 14 to the tally to topple the team’s total today. They would finish on 22 with everything to do on Saturday.

Scandinavian Vikings
Evelina Tovek (SWE) and the 9 year-old Winnetou de la Hamente Z impressed with a flawless performance for the Scandinavian Vikings – the duo putting a clear on the board for the team. But Christian Ahlmann (GER) and Take A Chance On Me Z had a unusually tough round, clocking up 12 penalties for the Vikings and plummeting the team down the order.

Doha Falcons
Bronislav Chudyba (SVK) and Lester IX tackled the course with determination, but the first part of the LGCT double came down. There was further drama as the 11-year-old bay gelding stopped at the last minute at the double set by the VIP hospitality, unseating Bronislav and meaning the Falcons would be eliminated and Bassem Hassan Mohammed’s (QAT) score would not count for the team.

Madrid in Motion
Maikel van der Vleuten (NED) and Beauville Z had a visible strategy in mind, going for a steady clear. They executed their plan to perfection, leaving every fence up but collected 1 time fault for their more cautious approach. Father and teammate Eric van der Vleuten (NED) opted to ride his top horse Wunschkind 19, and they too went for a steady round. But the final oxer just caught them out, and a time fault to add put the team on a total of 6 so far.

Cannes Stars
U25 rider Maurice Tebbel (GER) made his first appearance on the team after the mid-season transfer, the German talent riding Don Diarado. They made short work of the course, flying around with ease to finish clear and put the pressure on teammate Abdel Saïd (GER) to back it up with another. The Egyptian rider brought out Jumpy van de Hermitage, the 10-year-old bay gelding leaving plenty of air above the fences. They were a little flat over the Longines plank, and the GC plank toppled too to put the Stars on a score of 8 faults.

Shanghai Swans
Alexandra Thornton made her first appearance for the team this season, riding the 13-year-old Cornetto K. They delivered a spectacular round, but had the final oxer down plus a time fault to put the Swans onto a score of 5. Daniel Deusser (GER) brought out Scuderia 1918 Tobago Z, the small but powerful chestnut stallion taking on the course with enthusiasm. But that final oxer claimed its last victim, and the Swans would finish on a score of 9 so far.

The teams now look to Saturday for the second round of action, where tactics and strategy will be the name of the game as faults carry through and riders battle for supremacy in Saint Tropez.