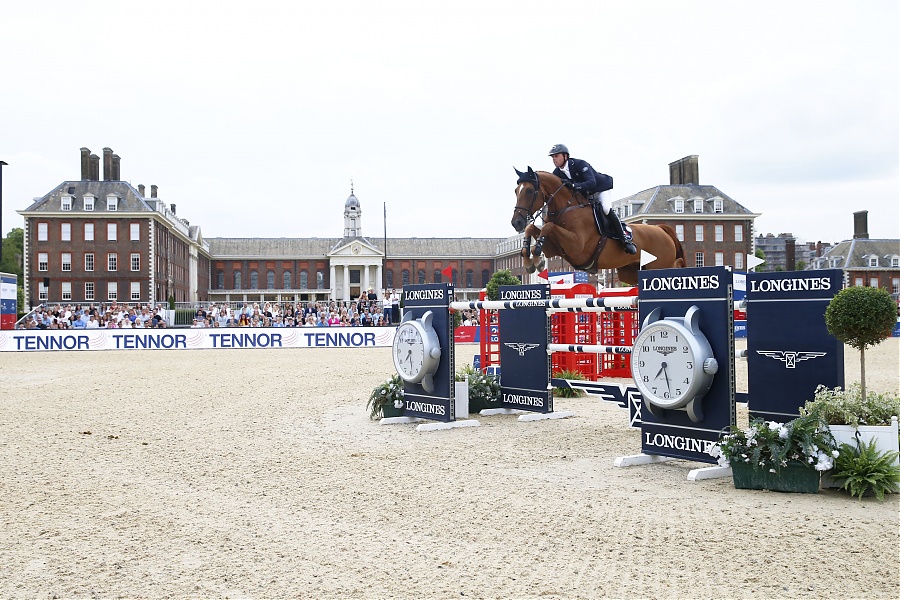 Riding the exceptionally talented 10-year-old gelding Explosion W in the spectacular Thames-side arena, Ben sailed over Alan Wade’s (IRL) challenging courses clear in an unassailable 35.98 seconds. Of the four clears in the 12-strong jump-off, his was the only one under 36 seconds. It marked the popular rider’s first LGCT Grand Prix win of the season. 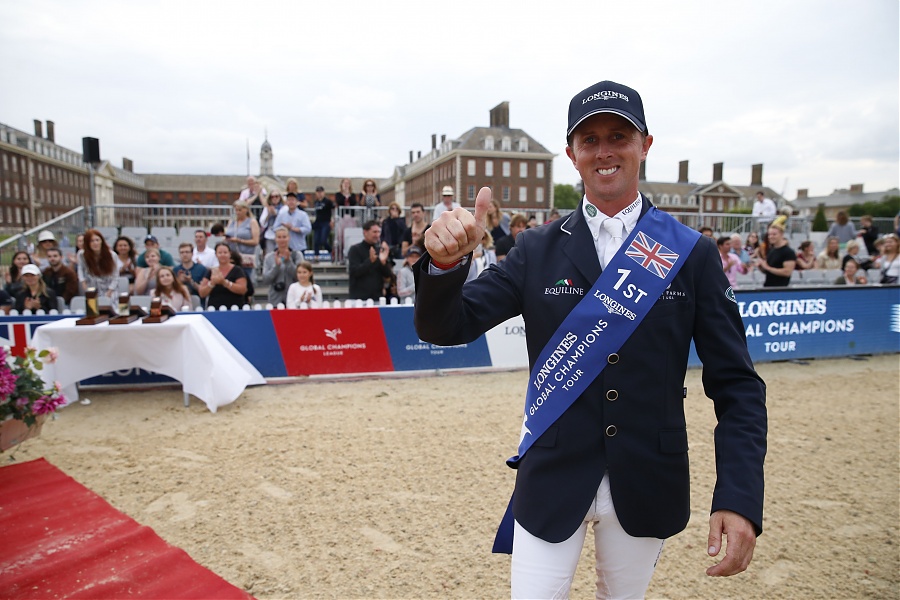 “The best win is to win at home,” said a delighted Ben, who was quick to praise his mount. “To ride probably the best horse in the world is an incredible feeling. Explosion and I started the year a little slower this year and he’s had two GCT seconds, but I took all of the risks today. He felt incredible — in a different league — and deserved this win.”

There were packed grandstands and Hospitality Lounges for the world class sporting action in perfect summer weather, with guests including Bruce Springsteen, Rory Bremner and the TV news anchor Alastair Stewart, who said: “The Global Champions Tour is the absolute zenith of a sport I adore. I’m here to support the Brooke equine charity.” 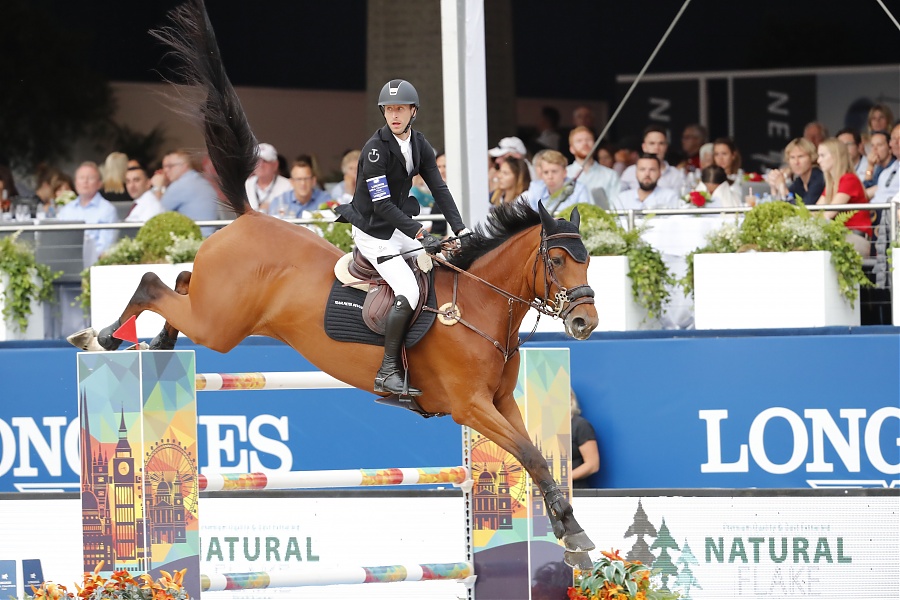 Ben’s win elevates him to second place on the current overall 2019 LGCT ranking behind the leader, Belgium’s Pieter Devos (BEL). As Ben has already qualified for the LGCT Super Grand Prix at the GC Playoffs in Prague in November, the golden ticket passed down to second-placed Shane Sweetnam (IRL). 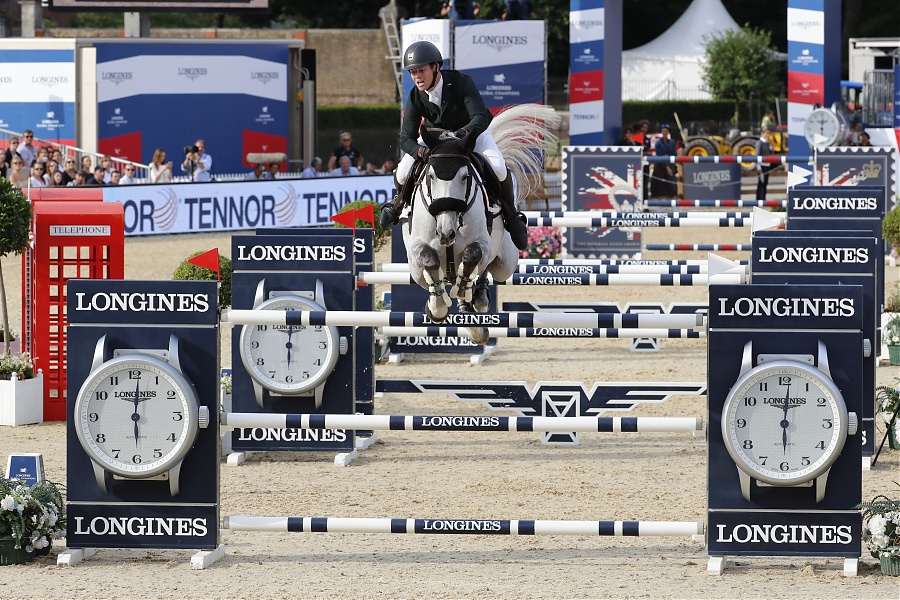 The Irish rider went second in the jump-off on the lovely grey gelding Alejandro, setting the bar high with a clear round in 37.44 seconds that only one rider could surpass.

Shane said: “In the warm-up I was looking at who’s qualified and who hasn’t. I knew I wasn’t likely to win, but thought maybe I could sneak into the Super Grand Prix. I am delighted to have qualified for it as it was in the back of my head today and I had my fingers crossed.” 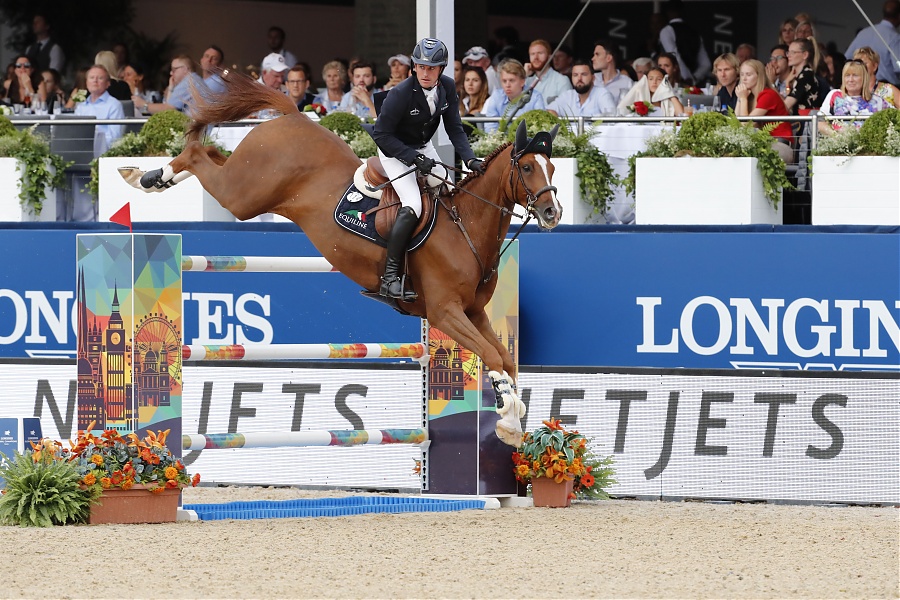 A second Irishman rounded out the podium, with last-to-go Darragh Kenny (IRL) riding a beautifully judged round on the inexperienced Classic Dream, who at nine years old, was the youngest horse in the entire starting field of 34.

“I believe in Classic Dream,” he said. “I took a risk but the horse is incredible, he felt amazing. I couldn’t have beaten Ben — my horse doesn’t have a massive stride like his does. There was no chance I would beat that time, so all I could so was my best.” 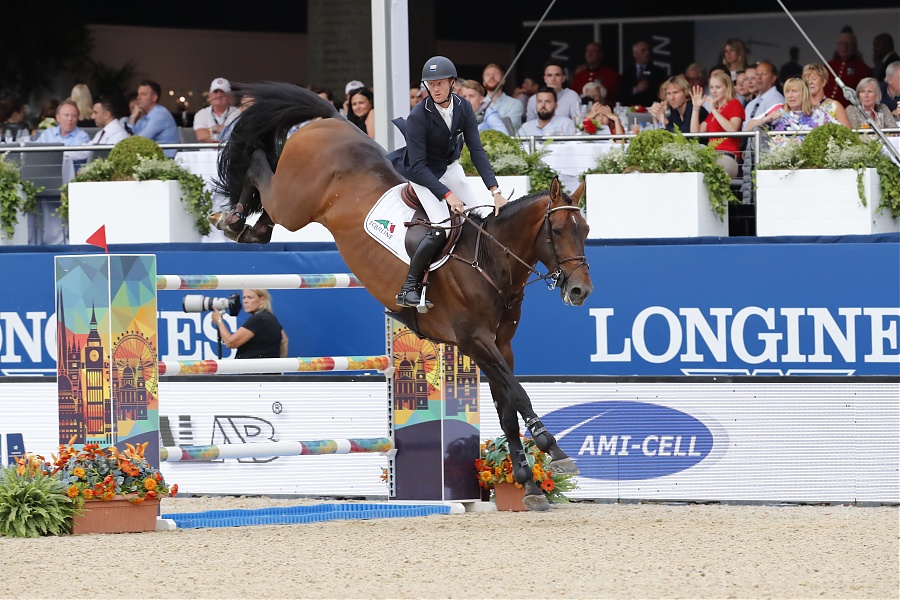 Niels Bruynseels (BEL) and Jenson van’t Meulenhof were the fourth and final double clear round, while the Canadian Eric Lamaze came agonisingly close to the podium with a fast round in 37.35 seconds as the penultimate to jump. But as the back rail of final fence clattered to the sand, his hopes of challenging for the lead were dashed and he finished fifth. 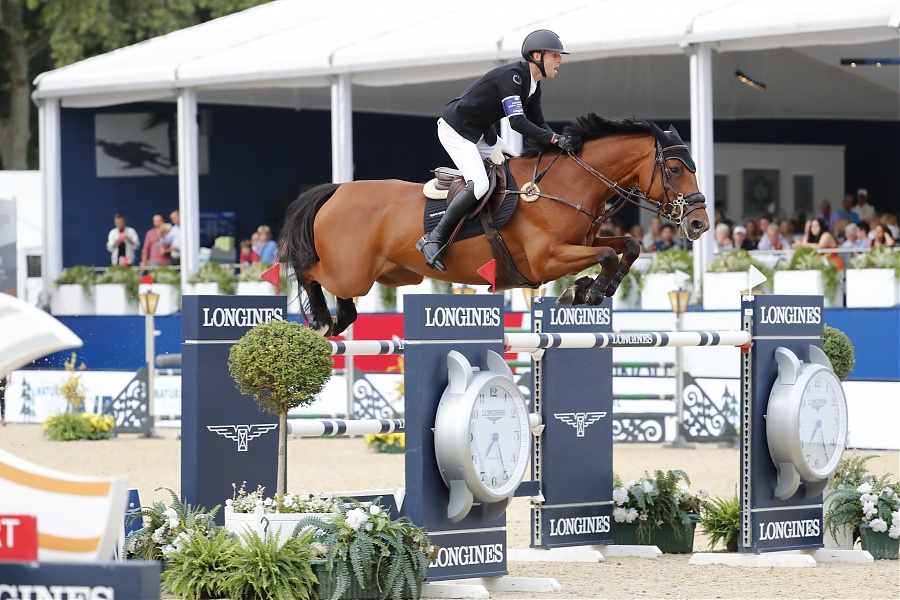 Pieter’s usually ultra-reliable horse Claire Z looked unsettled in the jump-off and hovered in the air in front of the double, bringing the first part down — as well as the stamp fence later on in the course — down to finish on eight penalties.

“I think I have to come up with a new plan because Ben is getting very close [in the rankings],”said Pieter. “We have all had a great season but there are still four important shows to go. I will focus on the final four and bring out my best horses to try and stay in the lead.”

Jan Tops, Founder and President of LGCT, said: “I have no predictions on who will win, anything can happen still. It’s very tight between the first five. It just depends on your horses and your luck. Everything is open and it motivates everyone to try their best.”

On the 2019 London leg, he added: “It was a strong competition and all the horses went well which tells you a lot about their surroundings. This weekend was a new course builder  for GCT in Alan Wade and he did a great job. He built different courses, we had great riders and there was a fine line between taking the win or not.”

The only other British rider in the jump-off, Robert Whitaker (GBR) on Catwalk IV, had to settle for eighth place after lowering the vertical fence with a water tray after the double combination.

In the first round, it was the delicate triple combination that provoked the most issues, and the time allowed of 71 seconds also claimed victims, prevented some talented combinations from progressing into the hotly contested jump-off.

Chelsea Pensioners, the British Army veterans who are cared for at Royal Hospital Chelsea, again took part in the prize-giving ceremonies of the GCL and the LGCT Grand Prix and were joined by members of the Household Cavalry Mounted Regiment creating a stunning and emotive equestrian spectacle in the heart of the British capital. LGCT of London is supporting the fund-raising campaign to develop a new Activity Centre for the Chelsea Pensioners. 7 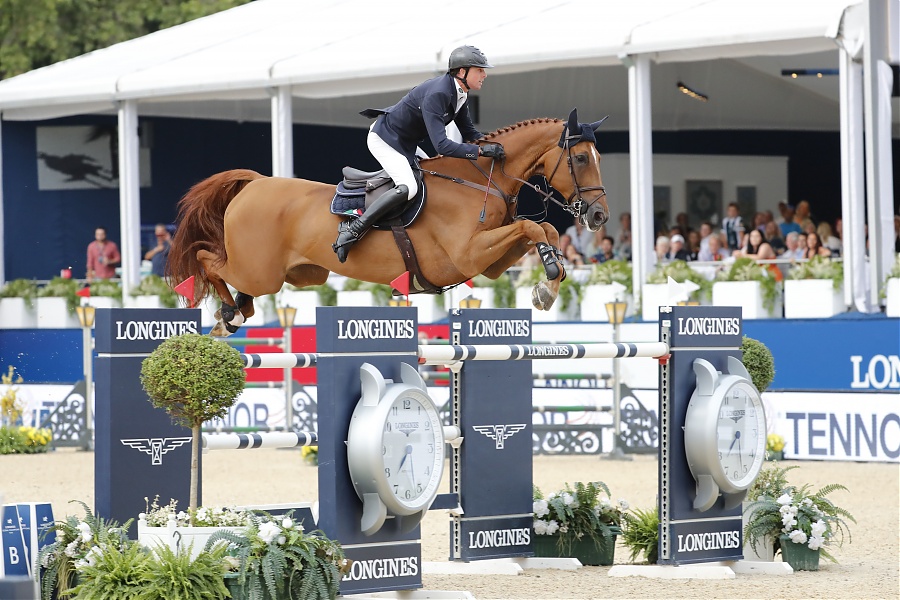 Ben’s victory — which handed him the lion’s share of the €300,000 prize-fund for the class — brings the British tally at the London leg of the LGCT to five: he has now won it twice, and compatriot Scott Brash has donned the winner’s sash a remarkable three times. He couldn’t repeat the feat this time, as he and Hello Mr President lowered a fence in the first round. 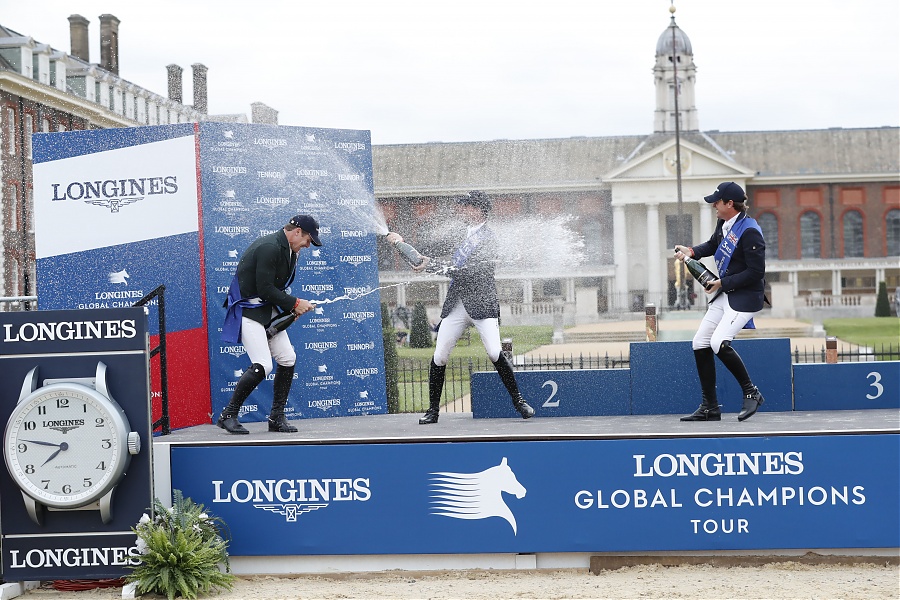 The Longines Global Champions Tour now moves on to leg 15, which takes place in Valkenswaard, the Netherlands, 9-11 August.