St. Gallen, Switzerland – June 02, 2019 – The reigning Olympic champions from France gritted their teeth and galloped to victory in the edge-of-the-seat €200,000 Longines FEI Jumping Nations Cup™ of Switzerland CSIO 5* at St Gallen (SUI) today, where a feisty Italian foursome claimed runner-up spot and the host nation, clear favourites at the outset, had to settle for third.

This second leg of the Europe Division 1 series came down to a nail-biting three-way jump-off in which Guillaume Foutrier (FRA) and his 10-year-old gelding Valdocco des Caps clinched it when second to go against the clock. And Swiss hearts were broken when once again their own Nations Cup title slipped from their grasp. It has been a long wait since their last St Gallen success back in 1996, but once again it wasn’t to be, despite a titanic effort from the crack side fielded by Andy Kistler.

“In France we love to win – this was a great day!” said French anchorman Kevin Staut (FRA)  whose team was already home and hosed with three clears in the first round before he took his turn with his new ride Calevo 2 who lowered only the final oxer. Italy also completed round one on a zero scoreline, but the leading nations were closely stalked by Switzerland, carrying just four faults as round two began.

Swiss course designer Gerard Lachat presented a superb 12-fence test that required accuracy, balance and control. The double of uprights at the second-last proved pivotal for many, and it was at the first of these that Swiss pathfinder and world individual silver medallist Martin Fuchs (SUI) faulted with Chaplin. So when Niklaus Rutschi (SUI) and Cardano CH hit the middle element of the triple combination then there were definitely going to be four Swiss faults on the board.

Clears from Fuchs, Rutschi and Paul Estermann riding Lord Pepsi changed everything second time out however. Last-line rider and World No 1, Steve Guerdat, didn’t need to return to the ring because the Swiss result couldn’t be improved. But his day wasn’t over, because Guerdat and his great mare, Albufuehrens Bianca, would be called up for a third-round jump-off when both France and Italy completed the second round with four faults on the board. 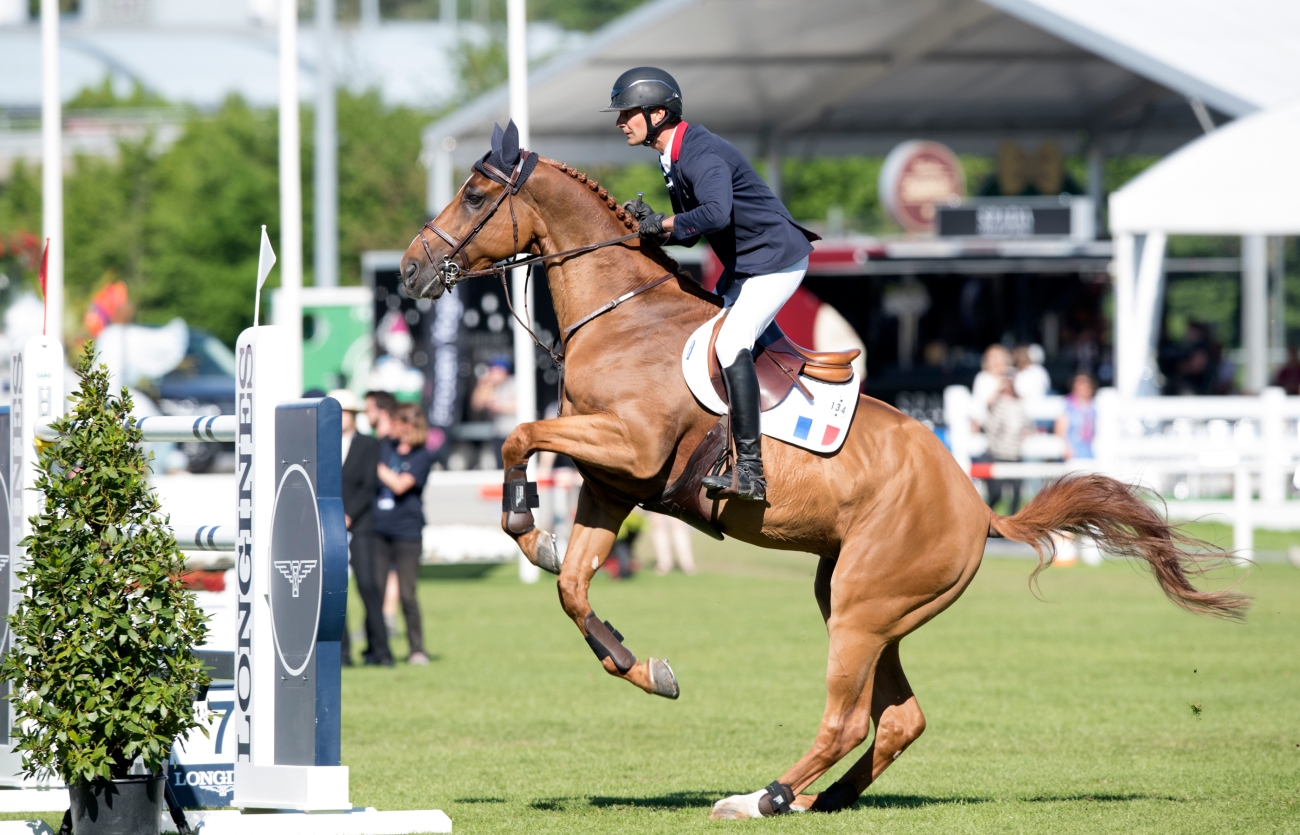 Double-clears from Penelope Leprevost (FRA) and Vancouver de Lanlore and Nicolas Delmotte (FRA) with Urvoso du Roch set the French up nicely, but Foutrier misjudged his take-off at the open water and when Staut’s inexperienced gelding hit the following oxer then that settled France onto a two-round four fault total.

Riccardo Pisani’s stallion, Chacclot, hit the first element of the now-infamous double at the end of the track, but if anchorman Luca Marziani (ITA) and Tokyo du Soleil could produce his team’s third double-clear of the afternoon, following footperfect runs from Giulia Martinengo Marquet (ITA) with Elzas and Paolo Paini (ITA) with Ottava Meraviglia Di Ca’ San G, then it would be an Italian victory. An uncharacteristic foot in the water meant it would go to a three-way battle against the clock however as there was nothing to separate the three sides.

The Swiss crowd held their breath as Guerdat led the way into the third and final round. He had no choice but to throw down a super-fast target time but, running strongly down to the remaining two elements of the triple combination, Bianca clipped the front bar with her hind feet for four faults in 43.46 seconds.

Chef d’Equipe, Thierry Pomel, selected Foutrier (FRA) to fight for the French. And although his time was slower than Guerdat’s, he left all the poles in place when breaking the beam in 44.09 and Italy’s Martinengo Marquet (ITA) couldn’t better that when crossing the line almost a half-second slower. She still had plenty to celebrate however having racked up three fabulous clear rounds with her lovely 10-year-old gelding. 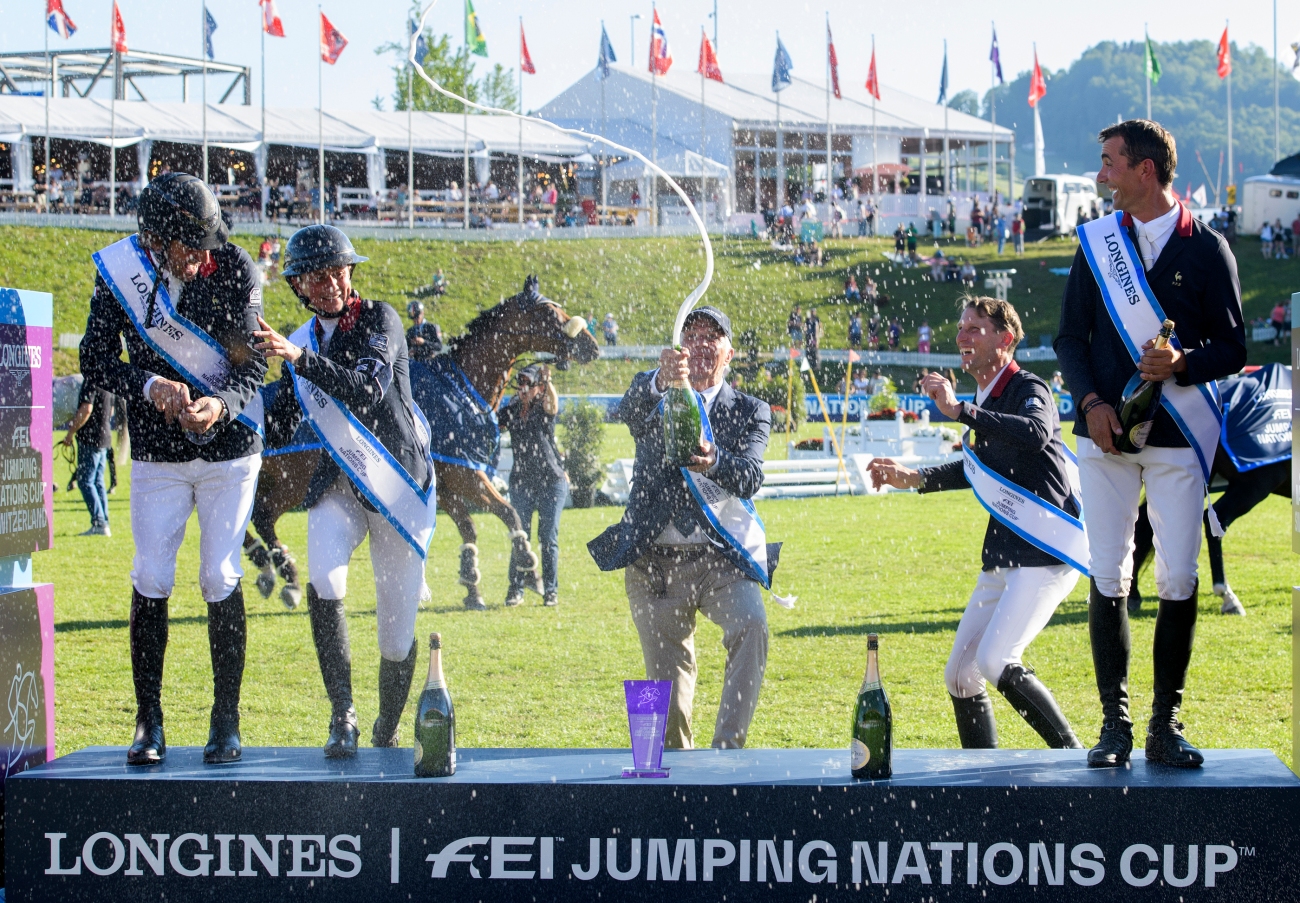 “Like in every Nations Cup there was a lot of pressure, but it’s a nice story, especially when it ends like this!” said Staut. Talking about Foutrier’s winning ride, the Olympic team gold medallist said, “Guillaume has been a really tough rider for a long time. He’s very consistent and he has this horse for two years now. Today he handled the pressure and was really focused on bringing home something great in the jump-off. When Steve had one down he went for a safe, fast clear round because we knew Giuia’s horse is not the fastest.”

Once again there was new shining star in the British team that finished fourth, as 24-year-old James Wilson steered Imagine de Muze to one of the six double-clears posted on the day. Team Brazil finished fifth despite elimination for last-line rider Stephan Freitas Barcha who took a fall from Artois D’Avillon at the final element of the combination in the second round. The competition was suspended while he received medical attention in the arena. Tonight a statement confirmed that “he was always conscious and responsive, but was taken to hospital for further examinations. The horse remained unharmed”.