Deusser and Jasmien vd Bisschop were a fraction of a second ahead of Nayel Nassar (EGY) and Lucifer V who put in an electrifying performance in the high calibre jump off to clinch second place ahead of Peder Fredricson (SWE) and H&M All In, completing the LGCT Grand Prix podium. 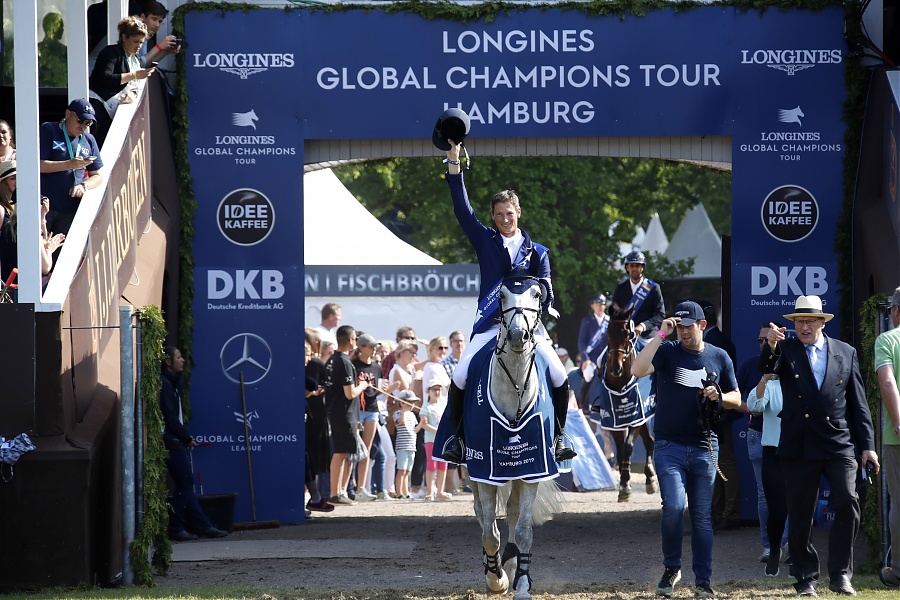 Deusser’s win propelled him into pole position in the LGCT Championship race overtaking Pieter Devos (BEL) who missed out on a place in the four-strong jump off. But only 10 points separate Deusser (155 points) and Devos (145 points) after six events of the scintillating 2019 season. Reigning LGCT Champion Ben Maher (GBR) has rocketed up to third in the rankings with 106 points overall.

Speaking after his victory an elated Deusser said the win was special for several reasons: “First of all my home crowd, second of all I had a big hope in that horse and that is her first big, big win and makes me really proud. I knew I had to take some risk and be really fast, it was very, very tight but I am very proud it worked. I wanted to win.”

He becomes the latest top rider to qualify for the Longines Global Champions Tour Super Grand Prix at the climactic GC Prague Playoffs in November.

It was another afternoon of high pressure, high stakes, top-level show jumping in Hamburg with tens of thousands of fans packing the large grandstands and families enjoying picnics around the famous Derby arena.

The €300,000 1.60m competition kicked off with a first round that saw leading combinations suffering multiple faults, time penalties and a surprise number of retirements from Frank Rothenberger’s course which demanded brilliance on all fronts.

Power and precision timing were crucial.  Early combinations including home heroes Ludger Beerbaum (GER) and Cool Feeling and Marcus Ehning (GER) and Funky Fred were among those failing to reach the jump off. Bertram Allen (IRE) was one of the early riders to retire and was followed by Michael Whitaker (GBR), Olivier Philippaerts (BEL) and Malin Baryard-Johnsson (SWE) with H&M Indiana who had a refusal at the GC vertical. 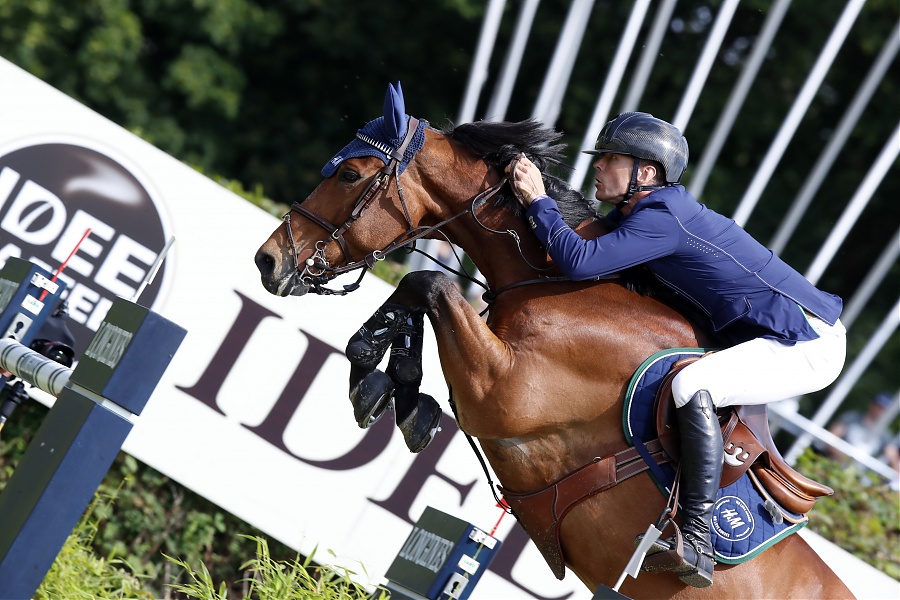 Class act Peder Fredricson (SWE) set the LGCT Grand Prix on fire with the first clear round after powering through the triple combination and finishing in a fast time over the big course which had a challenging time allowed of 80 seconds.

Daniel Deusser (GER) and his grey mare Jasmien vd Bisschop looked on form from the start and despite being wide to the open water the combination produced a popular clear round guaranteeing a jump off. Janne Meyer-Zimmermann (GER) and Karina Johannpeter (BRA) were unlucky clocking up a time penalty despite jumping clear.  Time penalty agony was also inflicted on Ben Maher (GBR) and Concona.

Emily Moffitt (GBR) and Winning Good were one of several pairings who were caught out in the hugely challenging combination. Christian Ahlmann (GER) a previous winner in the LGCT Grand Prix of Hamburg had earlier retired his star stallion Codex One in an emotional ceremony in the Derby arena. But Ahlmann also fell victim to the combination and further faults at the sunflower obstacle and final fence finished his chances with Clintrexo Z. And there was disappointment for former Hamburg winner Harrie Smolders (NED) who finished on 8 faults with Une de l’Othain.

Pieter Devos (BEL) went into the LGCT Grand Prix as overall ranking leader but it was not to be his day and despite a gutsy, confident ride on Claire Z he caught 4 faults at the Longines oxer putting him out of contention.

Philipp Weishaupt (GER) rode a brilliant clear on Che Fantastica raising the chances of a home win as the third qualifier for the jump off.

Nayel Nassar (EGY) and Lucifer V flashed round the extensive course finishing clear with a characteristically flamboyant buck from the lively 13-year-old gelding.

With four in the jump off it was set to be fast and furious around the grand grass arena of 150m x 80m.

Peder Fredricson was the trailblazer and his beautifully composed clear round on the 13-year-old gelding H&M All In stopped the clock at 49.98s, however left the door wide open for the other challengers.

Thunderous applause rolled around the arena as Daniel Deusser (GER) and Jasmien vd Bisschop entered the ring. The combination were fast from the start with some sharp riding on the turns edging them ahead at the split time before they crossed the finish line in the lead on 45.95s. A big margin on Fredricson’s time.

Weishaupt put the pedal to the metal on his big striding Che Fantastica but had an early rail down followed by another to exit the stage on 8 faults in 52.87 seconds.

Tension mounted as the final rider Nayel Nassar (EGY) and Lucifer V kicked off their challenge. They whipped round the early part of the course and were ahead at the mid point. But with Deusser tighter into the final stretch Nassar and Lucifer V came home in 46.18s, only a blink of an eye behind the winner but enough to drop them into second place.

The LGCT championship race now heads to the French Riviera for the 7th leg of the season in Cannes, starting next Thursday.