The €1.25 million showdown took place in front of a sell-out crowd at the O2 Arena in Prague with victory for Edwina greeted with a standing ovation after the Australian rider and her amazing mare clinched victory.

Celebrating her win Edwina declared her mare California “incredible” and said: “I really didn’t think I had won, I couldn’t see the scoreboard. After I had the fence down I thought I have just got to go for it. I can’t believe it, I’ve had the most amazing three weeks of my life and to finish by winning the LGCT Super Grand Prix is incredible.” 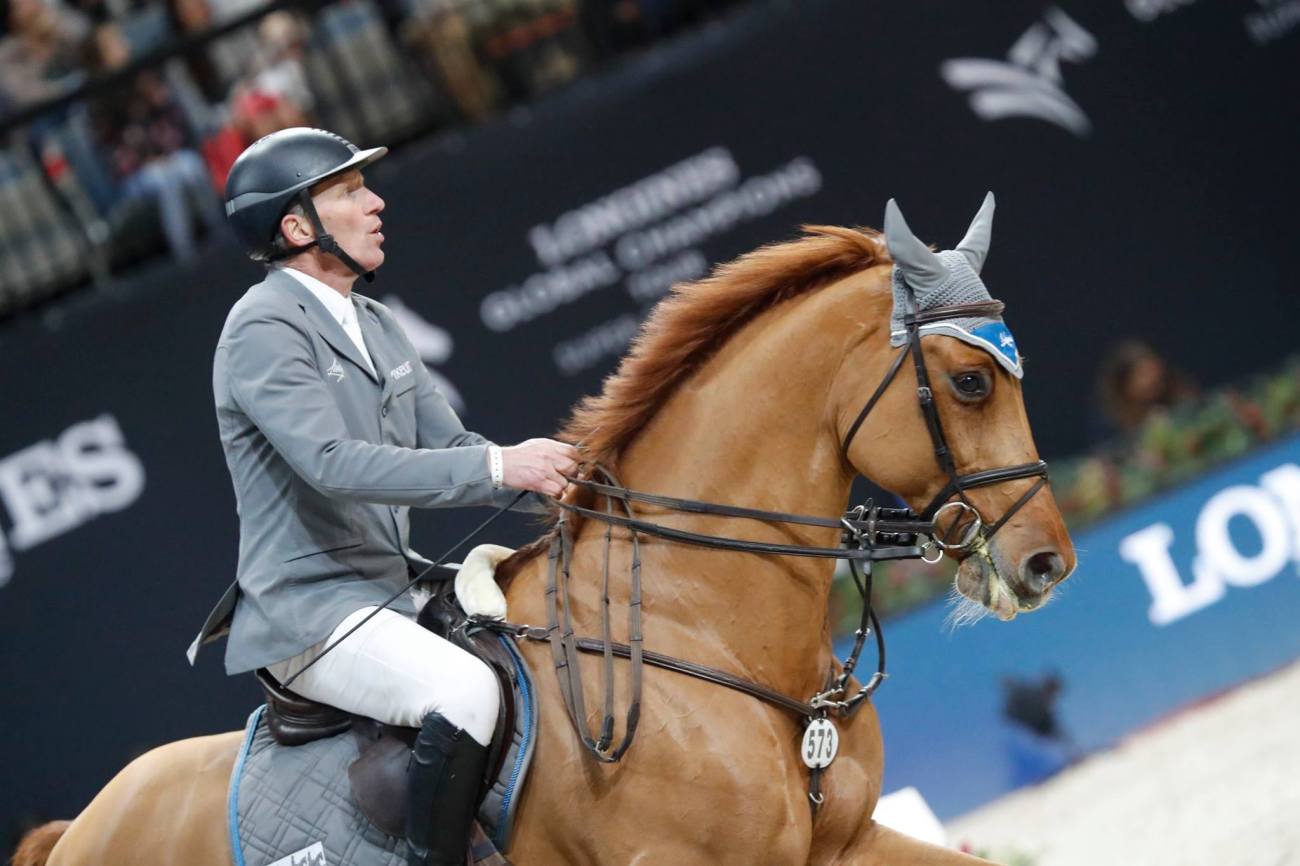 Speaking about the event Ludger said: “The set up is something really special. The sport, the drama. For me, being in the sport for many years, it is a new feeling.  I am quite sure this is a milestone in the history of show jumping.”

Jessica Springsteen (USA), who competed in the GCL Super Cup Semi-Final for Miami Celtics said: “It is just so exciting to be part of this new part of the sport. Being here has really inspired everyone and got them really excited for next year. It has been amazing, the graphics the performers, everything.”

The first-ever LGCT Super Grand Prix featured the 16 top riders who qualified during the 2018 LGCT championship series and the extreme pressure to go fast and clear produced electrifying sporting drama from start to finish.

Earlier the passionate crowd were thrilled by the dazzling Walk of Champions opening ceremony with flaming torches lining their parade in the arena adding a touch of show business to show jumping. Olivier Philippaerts (BEL) said the event had set a new benchmark in the sport:“Before we got here we did not know what to expect because the Playoffs are new and in a new city, but they have pulled it off, amazing. The shows are something we have not seen in our sport before and it has brought it to a different level.”

Courage, skill and determination was required to conquer all in this fierce battle set over two rounds and the 16 elite contenders were set a formidable 1.60m first round track by Uliano Vezzani in this indoor sand arena. Airy verticals and gaping wide oxers were strategically placed for the ultimate challenge, with the fearsome Longines treble combination coming towards the end of the course, meaning horses still needed to be on full power to clear the oxer-vertical-vertical test. A skinny oxer on a blind bend away from the in-gate was the final trick up Uliano’s sleeve and it all made for an intriguing first round contest.

Spectators witnessing the best of showjumping in several aspects

As the countdown began, the anthemic We Will Rock You blasted out, the spotlights focused and the doors opened; let battle commence.

Uliano had predicted five or six clears from these world class contestants in the opening round but pressure told and there were some surprisingly high scores.

The first to prove the course was jumpable was fourth-drawn Shane Breen (IRL) from Ireland, who rode for his life on the chestnut gelding Ipswich van de Wolfsakker, leaving all the fences standing but adding just a single time-fault.

One of the shock results came from 2018 LGCT season champion Ben Maher (GBR) with his multi-winning Explosion W. With two rails down they were one of four combinations to finish on eight faults in round one.

But the pivotal round was to come from the world number one Harrie Smolders (NED). An electric clear round with Zinius propelled them straight to the top spot.

“He was amazing, he was fighting for every fence — but then so was I,” said Harrie, with a huge smile on his face.

As tensions rose, the pressure told amongst competitors and it wasn’t until the penultimate rider that Harrie was forced to surrender his lead to the marginally quicker clear set by Australia’s Edwina Tops-Alexander and mare California.

This pair qualified for the GC Playoffs early in the season in Miami Beach and this course rode well for California, who has a relatively short stride but is agile and ultra-careful. Edwina squeezed her round every inch of the track and her clear in 70.54 seconds gave her the edge over the Dutchman’s 71.15 seconds.

So at the conclusion of round one, with scores carried through to round two, Edwina was perfectly poised in pole position, but with Harrie snapping at her heels for top honours. Shane Breen (IRL) was primed for a strong challenge in third spot on one penalty, ahead of the five-strong chasing pack of four-faulters including Ludger Beerbaum (GER) and double LGCT Grand Prix winner Nicola Philippaerts (BEL) on his tremendous partner H&M Chilli Willi.

With a clever shake-up of the track for the second round, tensions sizzled for the ultimate showdown. The early riders were on a recovery mission and both Lorenzo De Luca of Italy riding Ensor De Litrange LXII and Ben Maher of Great Britain on Explosion W rose to the occasion, bidding for a far bigger share of the prize money by jumping quick and clear to remain on eight faults.

New leader Ben Maher said: “Today wasn’t our day today. It’s easy to forget Explosion W is only nine and has limited experienced indoors but I’m happy he grew so quickly in the second round. I can’t be disappointed when he’s had such an amazing year.”

Nerves of steel were required as the competition intensified and, proving that anything can happen in this sport, drama came at the final fence for well-placed Belgian rider Gregory Wathelet (BEL) when Iron Man van de Padenborre refused to jump the final Longines wall, resulting in elimination. 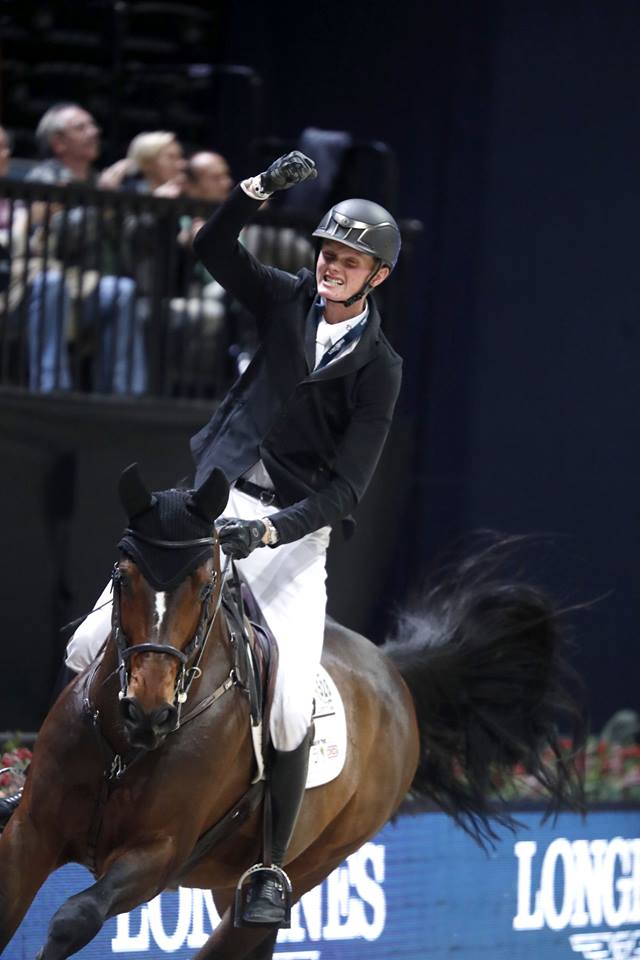 As the raft of four-faulters came forward, Frank Schuttert (NED) of the Netherlands immediately produced a mesmerising clear on Chianti’s Champion to post a two-round total of four and secured the coveted top spot. 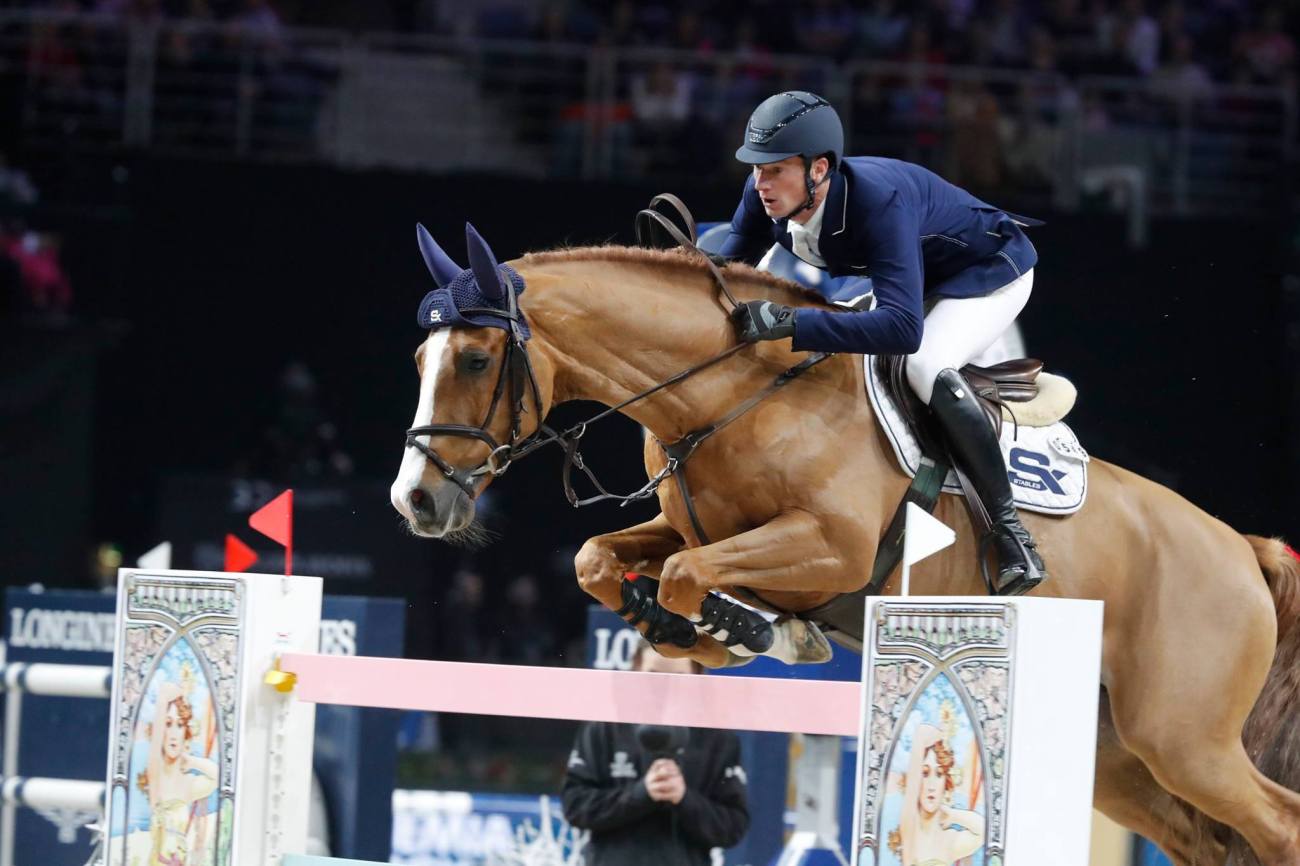 Germany’s Daniel Deusser and Tobago Z are usually one of the most reliable combinations at the top level but added an unlucky rail before it all unraveled for Paris victors Sameh El Dahan (EGY) and Suma’s Zorro, who came home on a total of 17 faults. 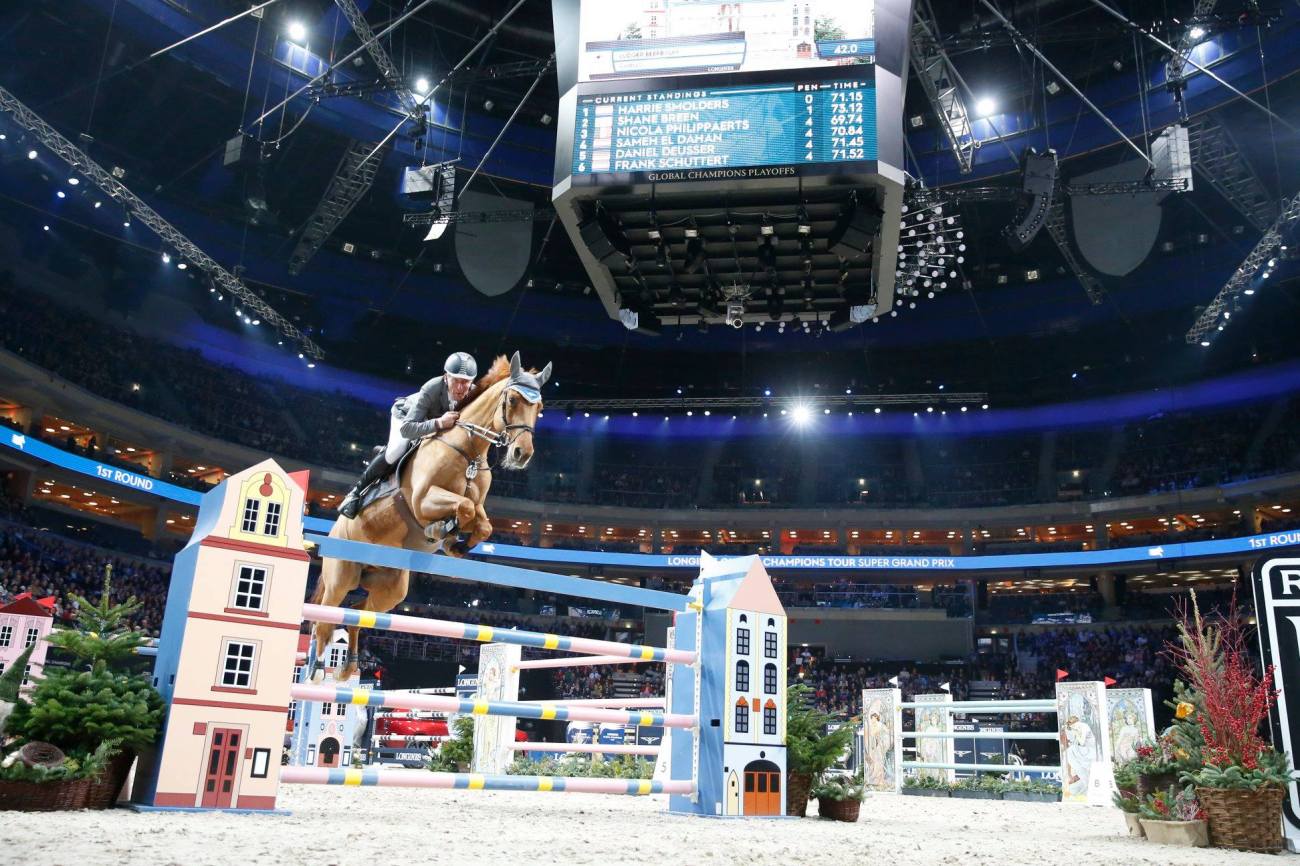 Ludger Beerbaum (GER) rode with his trademark precision and soared ahead of Frank Schuttert by over 3 seconds.

And then there were three. But on a night of fluctuating fortunes, Shane Breen (IRL), carrying through just the one penalty on Ipswich Van De Wolfsakker, sadly elected to retire when the rails started falling.

All eyes turned anxiously to Harrie Smolders, the first of the two riders on a zero score. But in an excruciating repeat of events on day one, his ride Zinius ducked out at the Rolls Royce vertical at fence nine and the world number one hit the deck. As quick as a flash, Harrie’s chance for glory had vanished.

So it all came down to Edwina, who has been riding the crest of a wave recently, with several big wins to her credit. She needed to jump clear for victory; one down and she had to beat the time of 61.56 seconds set by Ludger Beerbaum. She set off with typical determination but, agonisingly, a rail at fence eight tumbled. Edwina’s agenda immediately switched and she accelerated down the final line and soared over the finish, crucially less than half a second quicker than Ludger.

And so history was made, with Edwina Tops-Alexander crowned the brilliant victor of this revolutionary new competition, that has showcased showjumping and its very best. Ludger Beerbaum was thrilled to finish runner-up and “top rookie” Frank Schuttert placed third. 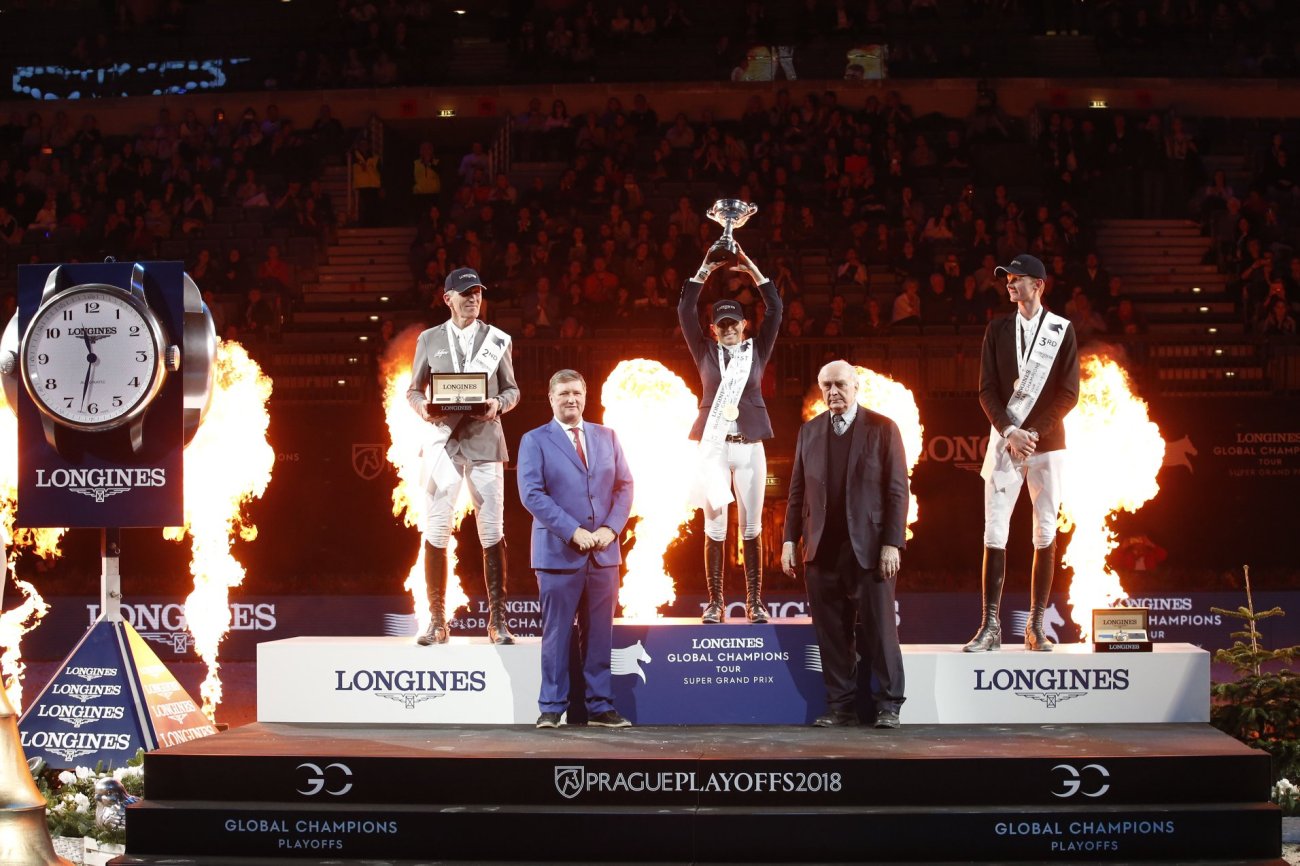 Special effects never seen before in show jumping entertained the crowd as the arena was filled with a fantastic sound and light show for the first LGCT Super Grand Prix prize-giving ceremony, with VIPs arriving in a horse-drawn carriage. International course designer Uliano Vezzani was presented with a special medal for his extraordinary skill challenging the world’s top riders and horses at the GC Prague Playoffs and thorough the season.

To the anthemic song “Legendary” the winning riders mounted the podium as flames shot up into the air behind them in a podium extravaganza. There were huge cheers from spectators as Edwina triumphantly raised the beautiful silver LGCT Super Grand Prix trophy, which was presented by Longines President Walter von Känel.

There was special recognition for the grooms as they received a medal after leading the champion horses into the arena for the closing moments of the awards ceremony and the rousing lap of honour.

At the press conference LGCT President Jan Tops said:  “It could not have been better. From A to Z it was fantastic and a great atmosphere. Big applause for the organisation team in Prague.”

Jan Andrlik, GC Prague Playoffs Event Director said: “It is absolutely amazing and for us an incredible honour to welcome the best riders and horses here. It is a very big thing for us that Prague is the first [GC Playoffs].”

Edwina agreed: “It is a huge honour and one of the most prestigious Grand Prix I have ever won. This competition is unique. Every class in this whole show has been pressure for the riders and that’s what makes it so exciting. I really have to thank the organisation in Prague for pulling this off, it is amazing.”

Runner-up Ludger said: “It was quite emotional even for an old guy like me. Today we have seen the future in terms of athletes, modern venue, technical, it is something really exciting. To me it is a milestone and I enjoyed being part of it.”

Frank said it felt “unbelievable” to finish on the podium.

“I am so happy, my horse jumped amazing today,” he said. “I had only once chance with so many good riders around me. I’m very lucky I am here it is such an amazing show – the opening ceremony and the Walk of the Champions, it was amazing.”