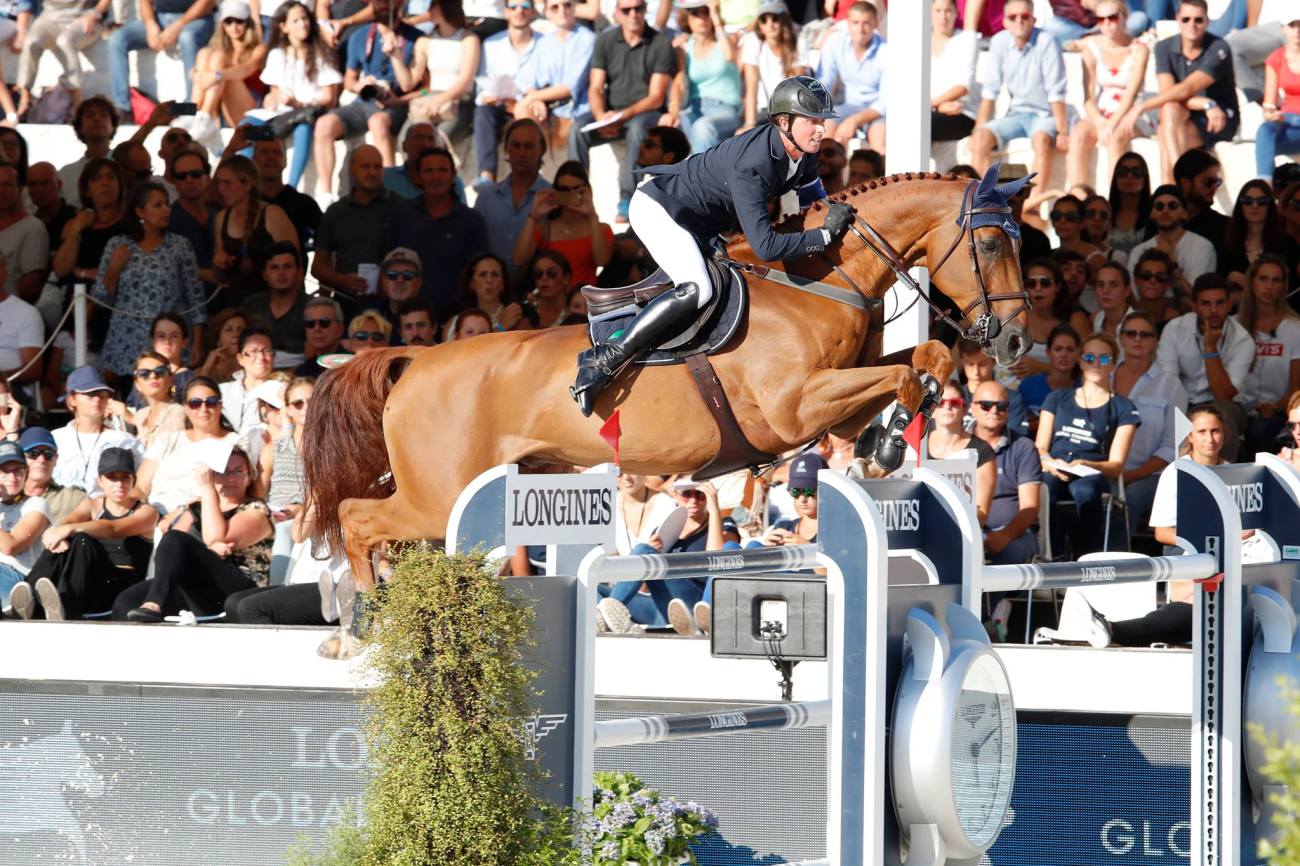 Great Britain’s Ben Maher and Explosion W, one of the most phenomenal combinations in show jumping today, were declared LGCT Champion of 2018 in a fairytale ending to their blazing 2018 season.

The Olympic gold medallist Ben and Poden Farms’ extraordinary Expolsion W have dominated the individual championship this year and not only won the €300,000 Longines Global Champions Tour Grand Prix of Rome yesterday, but took the overall Championship title.

Under intense pressure Ben and the nine-year-old chestnut gelding produced the fireworks in a scintillating LGCT Grand Prix jump off securing their place in LGCT history. 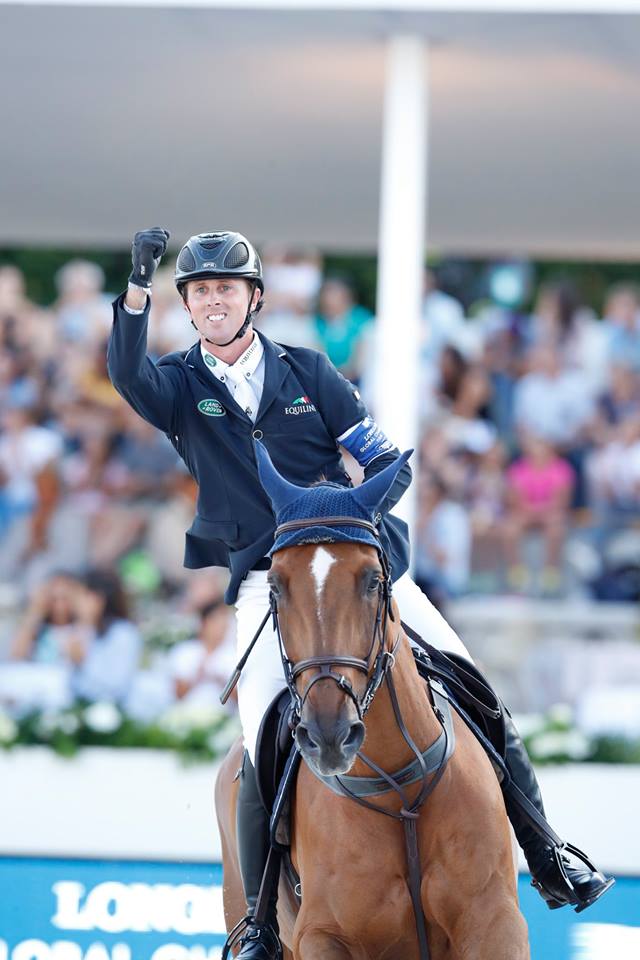 The new LGCT Champion of Champions said after his victory: “It has been an incredible season, I can’t quite believe it. It is great to be back in the top end of the sport. Explosion W is incredibly fast, I have never ridden a horse as fast without really pushing him. What a horse. Explosion is phenomenal for his age.

“I have a lot to thank Poden Farms and the Moffitt family for for supporting me, it is a team effort. To finish in style like this is something I will savour for some time. To win is a dream come true.”

Ben is already qualified for the new GC Playoffs in Prague and the first-ever LGCT Super Grand Prix after winning the LGCT Grand Prix in Madrid and Ramatuelle/Saint-Tropez and placing second in Shanghai in an incredible record this year. Due to this being his third win, Ben handed a ticket to the LGCT Super Grand Prix to second placed rider, Henrik von Eckermann (SWE), as per the qualification rules.

Ben is also at the top of the GCL overall team championship ranking with London Knights and could take that title at the finals in Doha in Qatar in November.

The 15th LGCT Grand Prix of the season played out under brilliant blue skies as the cameras panned across the arena towards Rome and the dome of St Peter’s at the Vatican in this unique setting for top show jumping.

The biggest crowd so far packing the seats lining the beautiful Roman amphitheatre lined with 59 imposing marble statues reflecting Ancient Rome and adding to the historic ambience of the prestigious international sports event.

It was a sumptuous feast of top show jumping with spectators fanning themselves in the heat as they watched an afternoon of sporting joy and heartbreak unfold.

Another genius, deceptive course by international designer Uliano Vezzani required perfect and precise performances from the stellar horse and rider combinations with no room for error.

The tough course for the 35 qualifiers produced only five clear rounds at the halfway point.

Guests from around the world watched from the stunning architect-designed Hospitality Lounge. Longines President Walter von Kanel and Longines Vice President of Sales and International Marketing were joined by 150 guests for the launch of the brand’s new watch the Conquest VHP coinciding with the LGCT Grand Prix in Rome.

A volley of top riders went early in the draw and the surprises came thick and fast. There was heartbreak for the first rider in the dazzling sand arena Jane Richard Phillips after her horse Foica van den Bisschop refused causing her to fall. But Irish Under-25 Michael G Duffy (IRL) on Castlefield Rubinus thrilled with the first clear round on his talented former dressage horse. 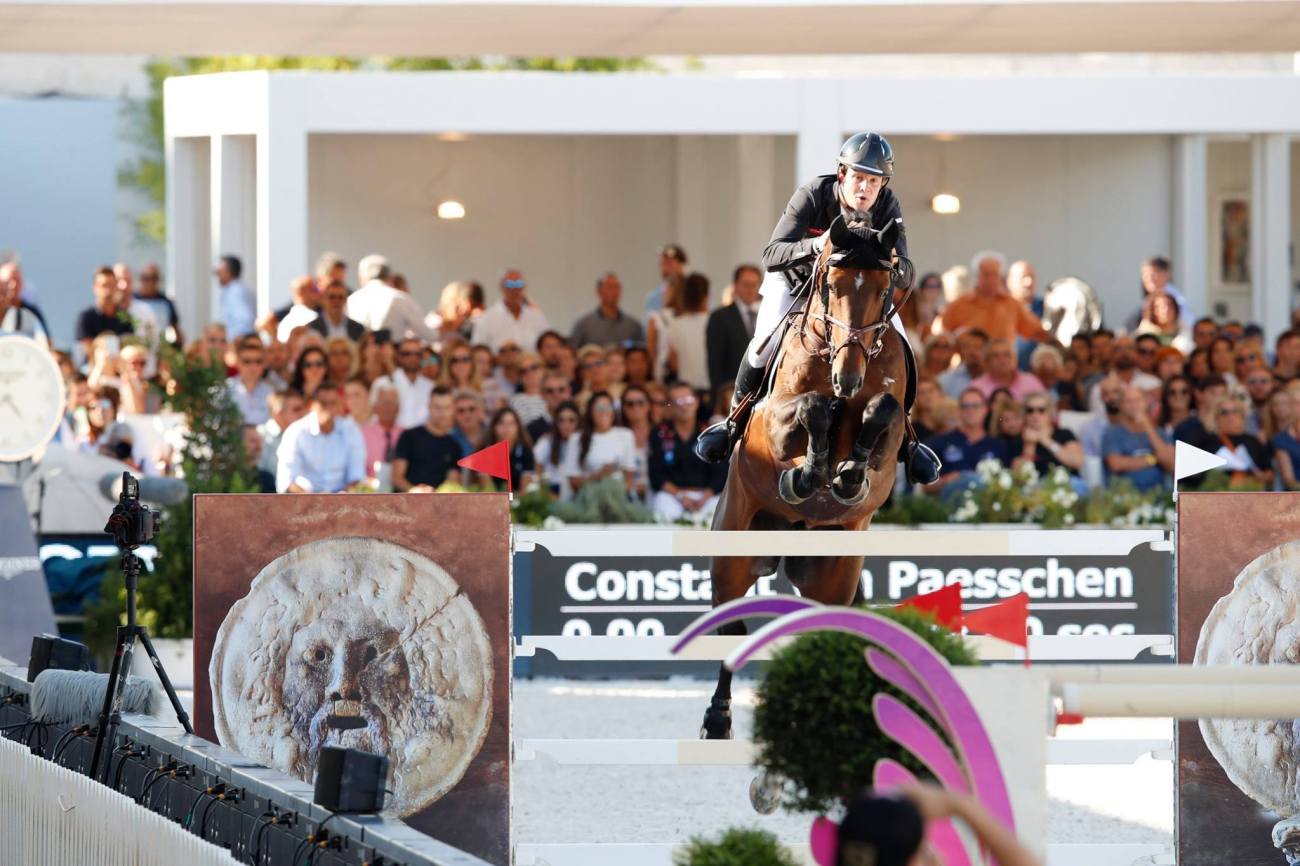 Constant van Paesschen (BEL) and Jilbert van’T Ruytershof followed on with an impressive clear and his compatriot Jos Verlooy (BEL) and Caracas delivered the next clear to win through to the all-important jump off.

But there was no dolce vita for some of the world’s top riders as several bogey fences put them out of contention – and out of Ben Maher’s way. 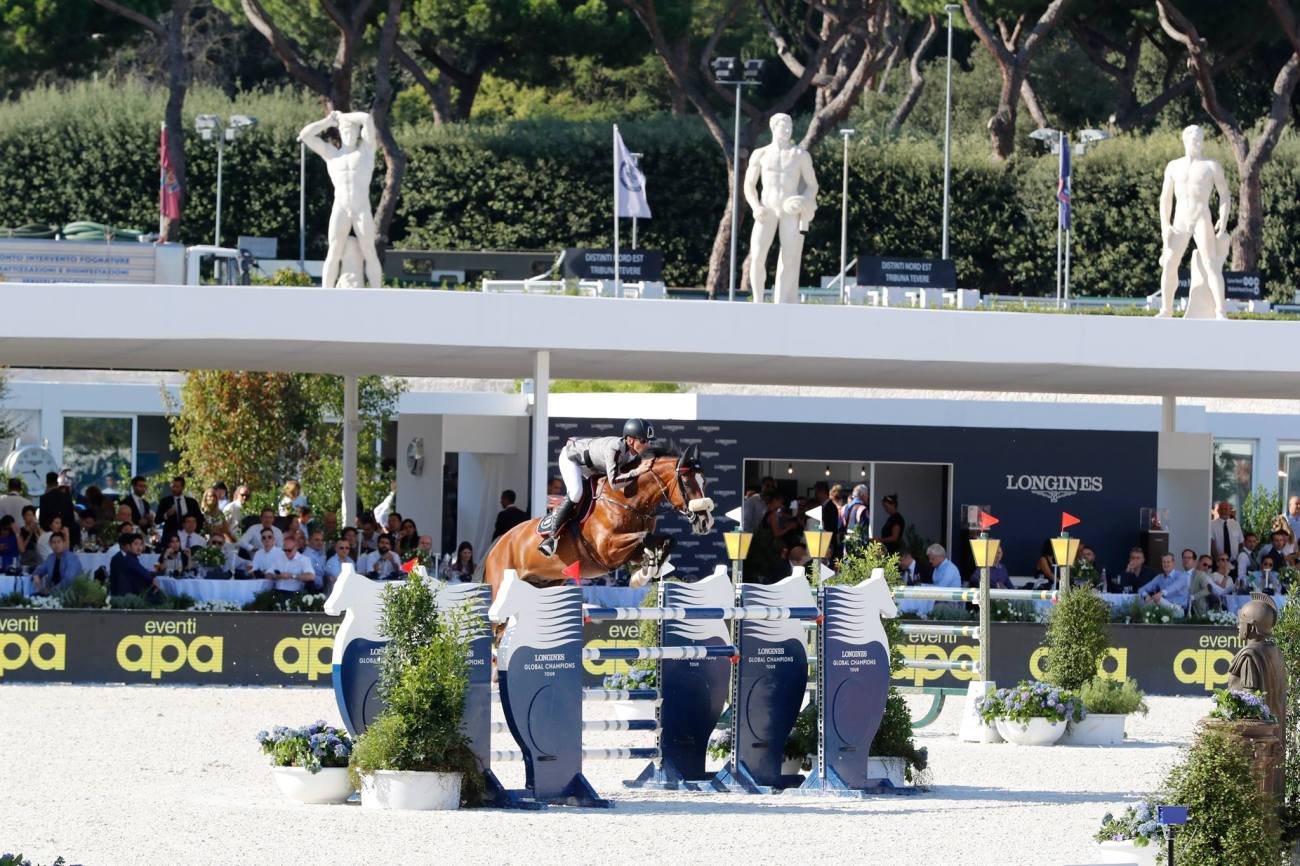 Peder Fredricson (SWE) and Hansson WL had a dramatic refusal at the spooky last upright but the Swedish champion’s tremendous skill and experience meant he was able to pilot the horse over the jump to finish the round on four faults.

Compatriot Henrik von Eckermann (SWE) produced a brilliant round on Cantinero securing themselves a place in the jump off.

Christian Ahlmann (GER) and Tokyo were among top combinations who fell foul of the tricky course where there were repeated faults at the Longines treble combination and the double combination, the Roman coin upright and the final upright.

The crowd went wild when home favourite Lorenzo de Luca (ITA) entered the arena but he was one of the victims at the Longines triple combination. Italian star Alberto Zorzi and Contanga 3 also produced groans from the crowd as he exited with a surprising 8 faults. 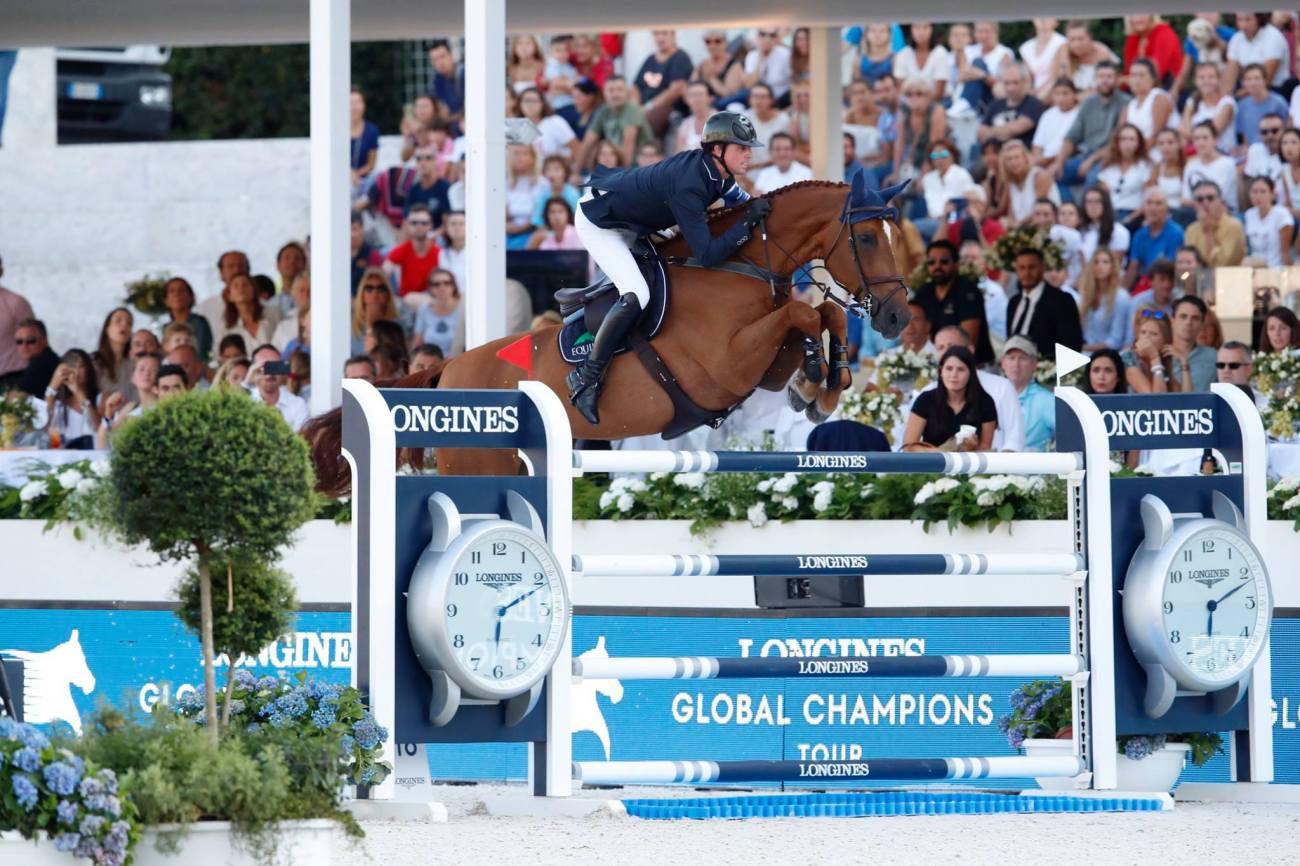 Tension mounted around the arena as it became clear that Ben Maher (GBR) was in with a strong chance of winning the overall LGCT championship. Despite the knowledge that he could take the title, Ben delivered a flawless round with Explosion W, completing the five rider jump off. 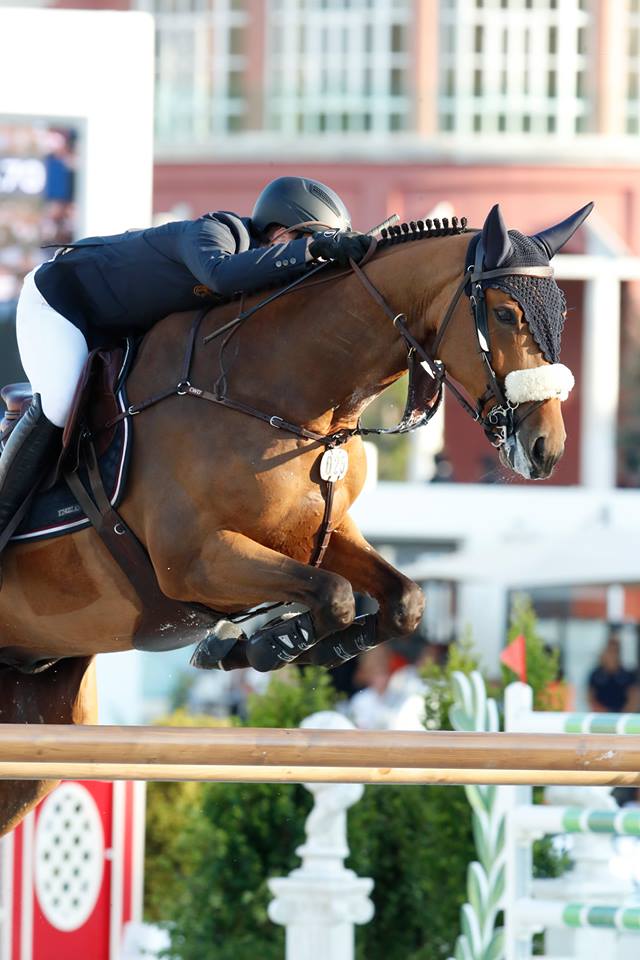 First to return to the ring, Michael G Duffy (IRL) set the pace, going clear in 39.68 but leaving the door open for a faster contender. 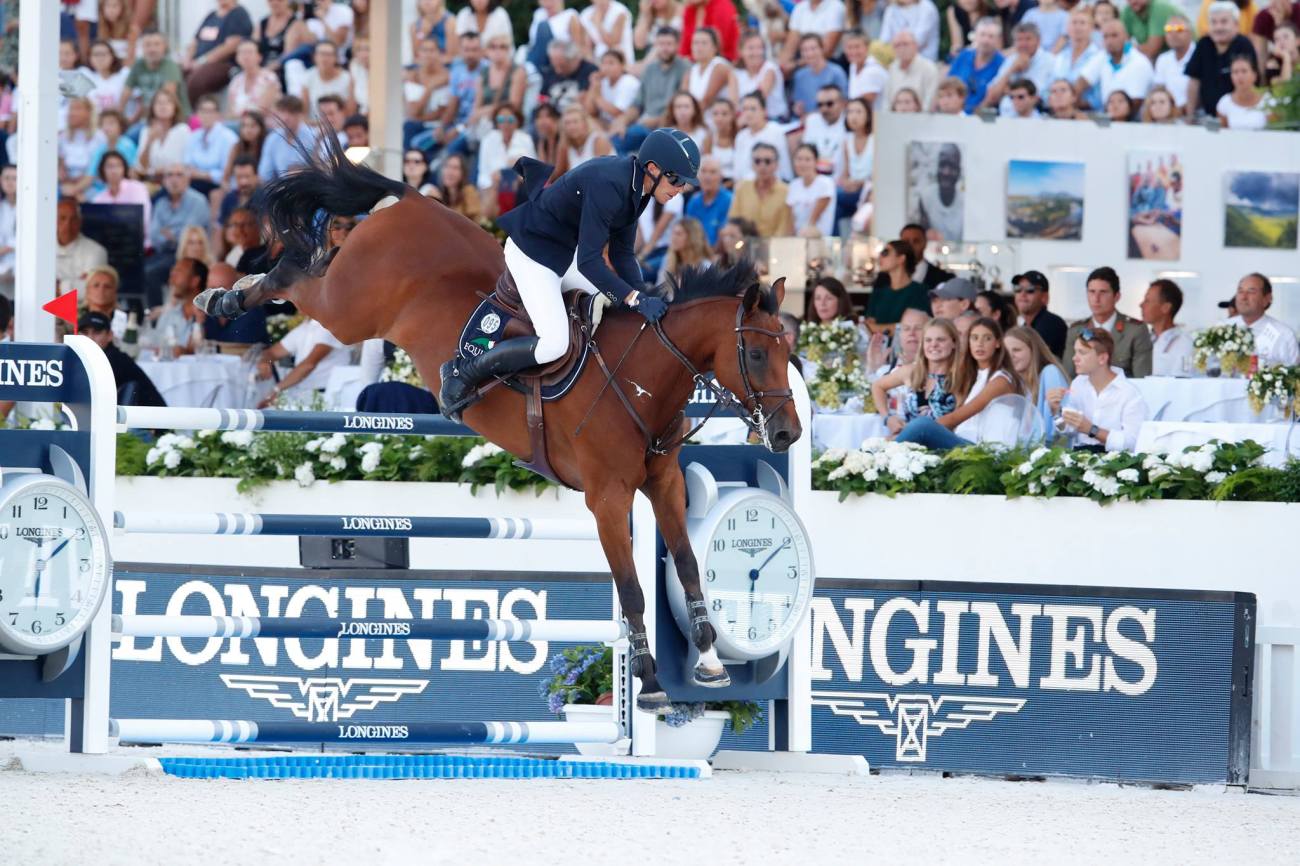 Henrik von Eckermann (SWE) polished off another great clear stopping the clock in 38.32 after Constant van Paesschen had pushed too hard and suffered four faults at an early fence. 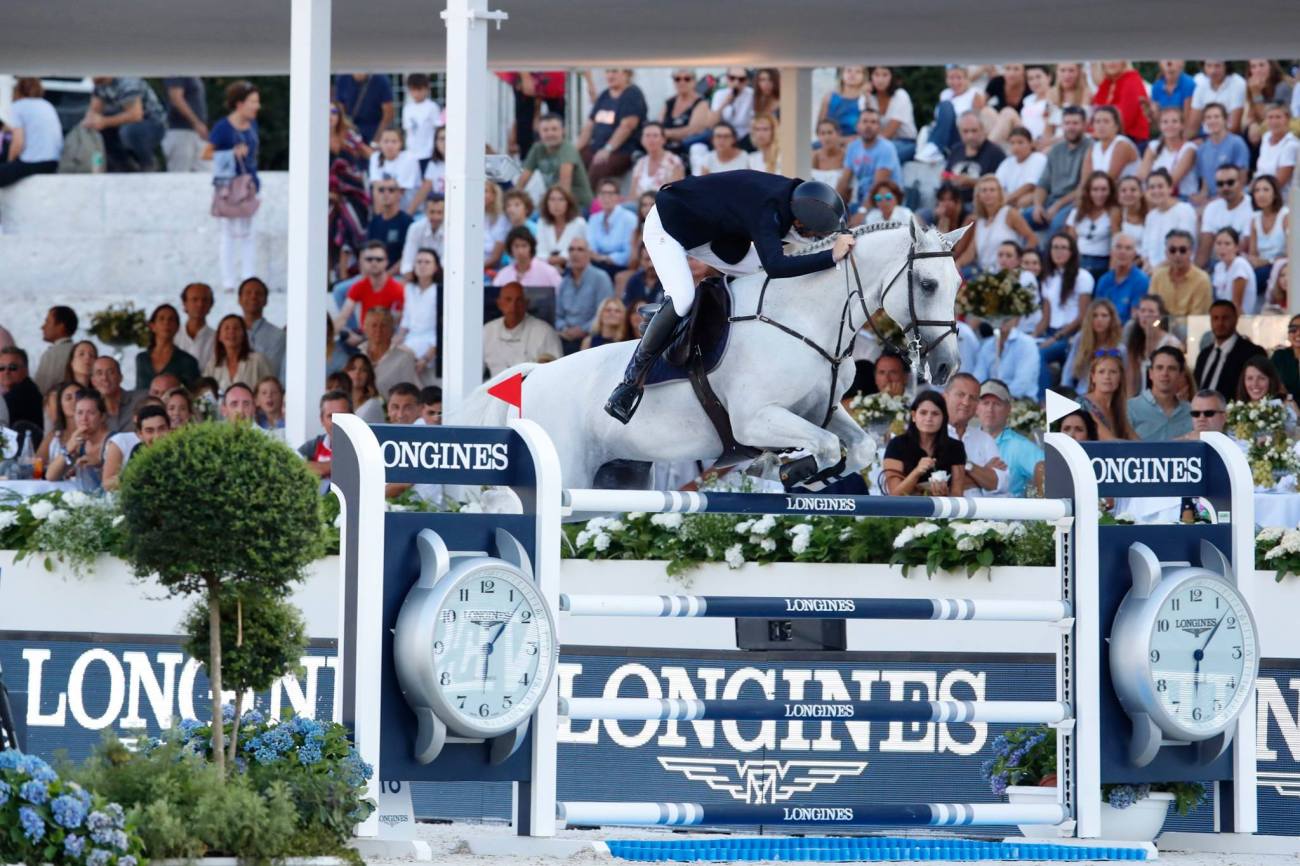 Jos Verlooy (BEL) and Caracas came close going clear in 38.32 and the stage was set for Ben and Explosion to finish the job. Despite the intense pressure the British rider appeared cool and calm as he piloted the nine-year-old Explosion to a breathtaking clear round taking the season title. 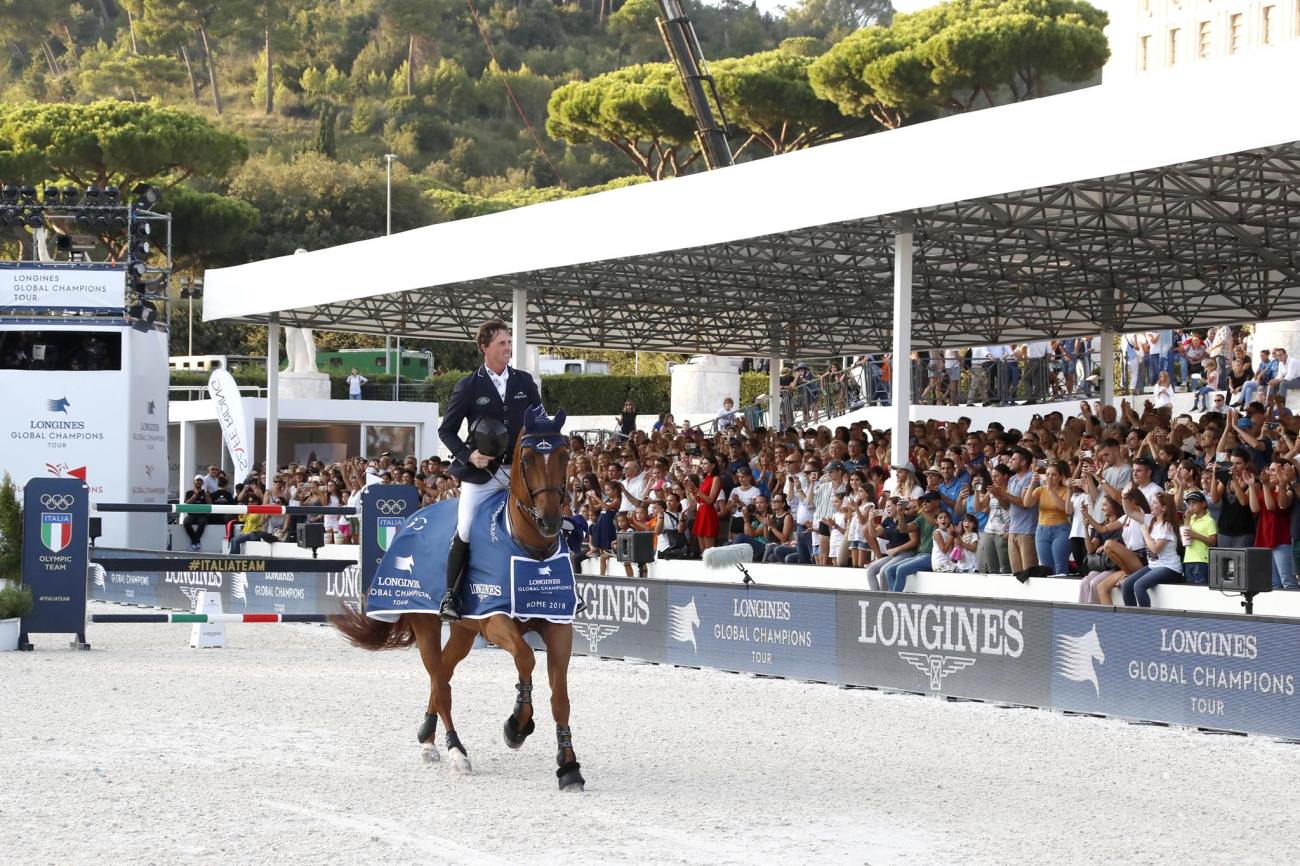 Ben Maher (GBR) & Explosion W during their lap of honor

The Championship now looks to Doha, for the final round of the 17-event season when Ben will be crowned 2018 Champion of Champions and the fight for second and third continues. 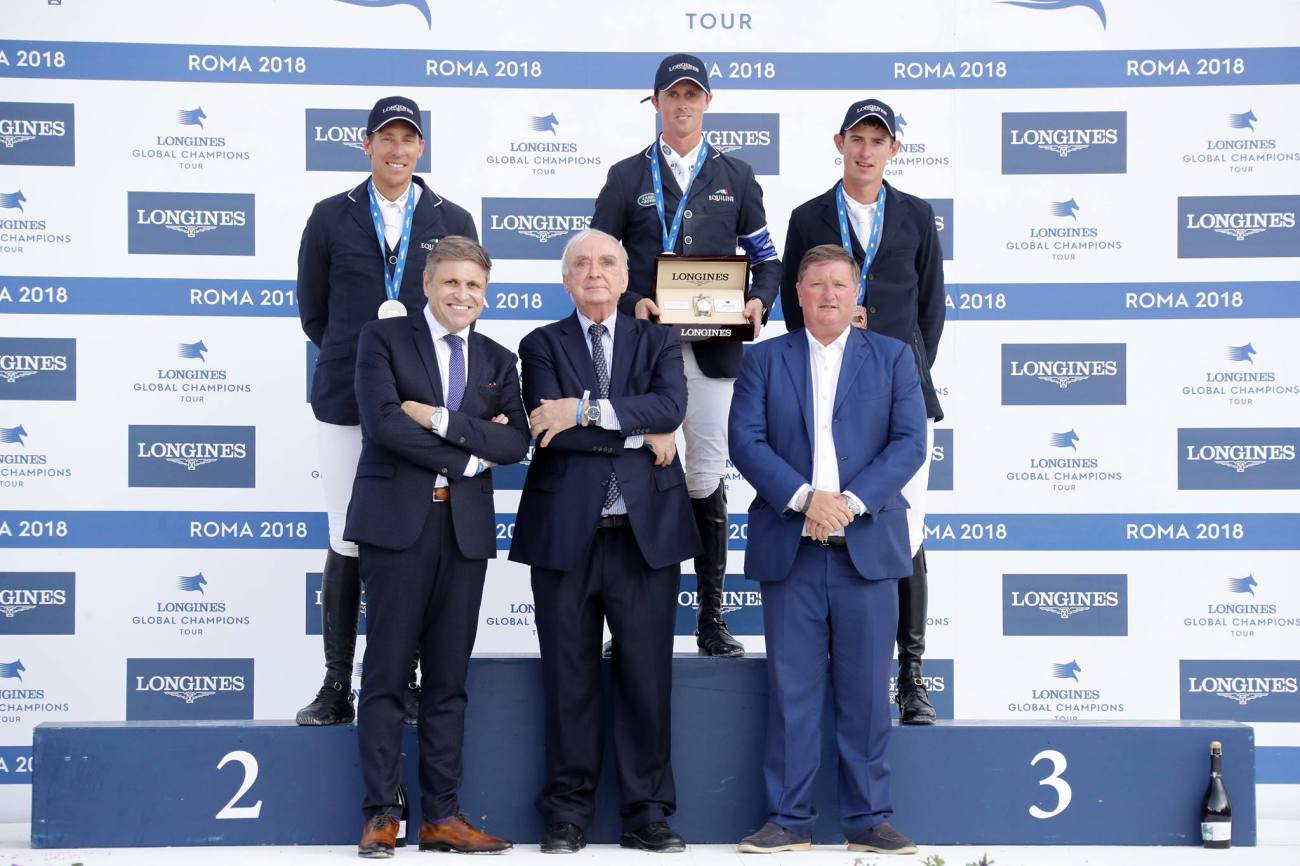 Jan Tops, Founder and President LGCT: “No one deserved it more than Ben this season. He’s had three wins. He has two great horses in super shape and he’s the well deserved Champion of the year. He managed his horses well, he had the goal to win this – it’s the most difficult [Championship] to win over 16 legs, against all the best horses and riders in the world. You have to have a good plan, great management and of course a bit of luck but he did everything well and it’s very well deserved. I prefer smaller jump offs, Uliano again did an amazing job – it was tough but everything was fair. It was a great win. I’m happy also for Henrik who qualified for the LGCT Super Grand Prix in Prague. And Jos has been very consistent this season so deserves to be on the podium. These young riders are the future for our sport, and it’s nice to see how comfortable they are now on these big tracks. It’s what we all want to see as riders for the future.

The 2018 winner is decided but Alberto [Zorzi], Scott [Brash] and Christian [Ahlmann] could all finish on the podium there, so the final will be great.”

Eleonora di Giuseppe Event Co-ordinator: “It is a double honour for us, for the organisation, the Italian Federation, for Italy and for Rome – it’s been a brilliant finale.” 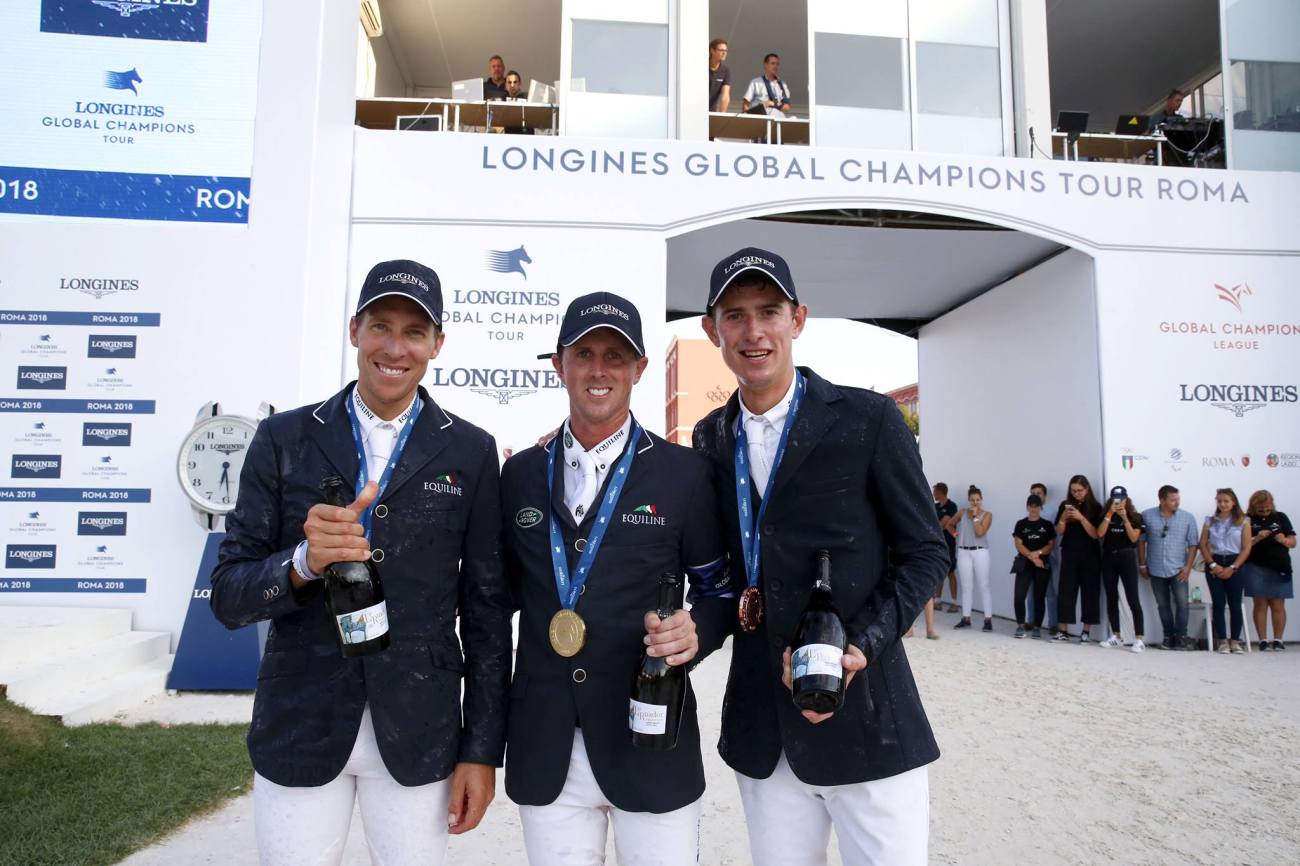 The top three after the champagne celebration

Jos Verlooy, 3rd place: “You have to stay patient. And if you ride good the results will come, so I’m pleased with today. In the beginning of the week we looked at the riders list, and counting how many had qualified for [the LGCT Super Grand Prix] so my goal was to qualify for Prague. I just missed out, but I can still be proud to be third next to these two riders!”

Henrik von Eckermann, 2nd place: “I’m really happy [to qualify for LGCT Super Grand Prix], it’s going to be a proper battle I think! I jumped my horse yesterday and had one down but I said to my groom he feels in such great shape, even though he’s 16 years old now, so I’m really pleased to be second today. My plan was to be first, but I knew Ben would be quick, so I’m really pleased with second place.”

Ben Maher, 1st place: “There was a bit of pressure today, with the team for GCL, and to qualify for the Grand Prix. Explosion took a bit of time to settle [in Rome], he wasn’t quite as relexed in the first couple of rounds but as I was warming up for the Grand Prix I could feel him kicking into gear as he normally does. He jumped incredible today. I was fortunate as last to go – he’s naturally very very fast, and I made one or two mistakes in previous rounds which cost me greatly! I’m very proud of this horse.

As Jan said it’s a long season, I’ve been competing in LGCT since almost the beginning and never really come close – never had the horsepower or the number of horses, so I have a lot to thank Poden Farms for and the Moffitt family. As Jan said it’s a team effort, they are young horses – we have a strong group of grooms and riders behind me, so it’s really thanks to them.

To finish early means I can relax a bit, rest the horses and go to Doha with goals in mind. GCL is very important for the London Knights. But it’s been an incredible season for me – if someone said to me six months ago that I’d be sitting here with two 9 year old horses I would never have believed that. I can’t quite believe it to be honest. Even today, I just kept my head down, stuck to my plan, trust my horse. I have to believe that he will clear every jump, and I know he’s fast, so it’s great to be back in the top end of the sport this year. I’m really going to enjoy this moment.”