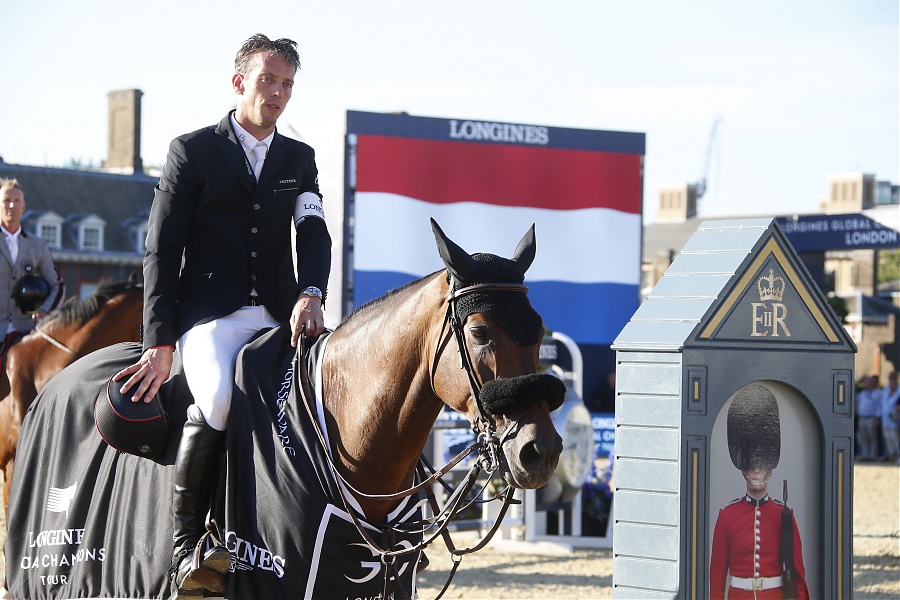 World Number 1 Harrie Smolders (NED) finished the Longines Global Champions Tour (LGCT) of London on top with his second win of the weekend, piloting the lightning fast Zinius to victory and winning it on an edge-of-the-seat gallop to the last. 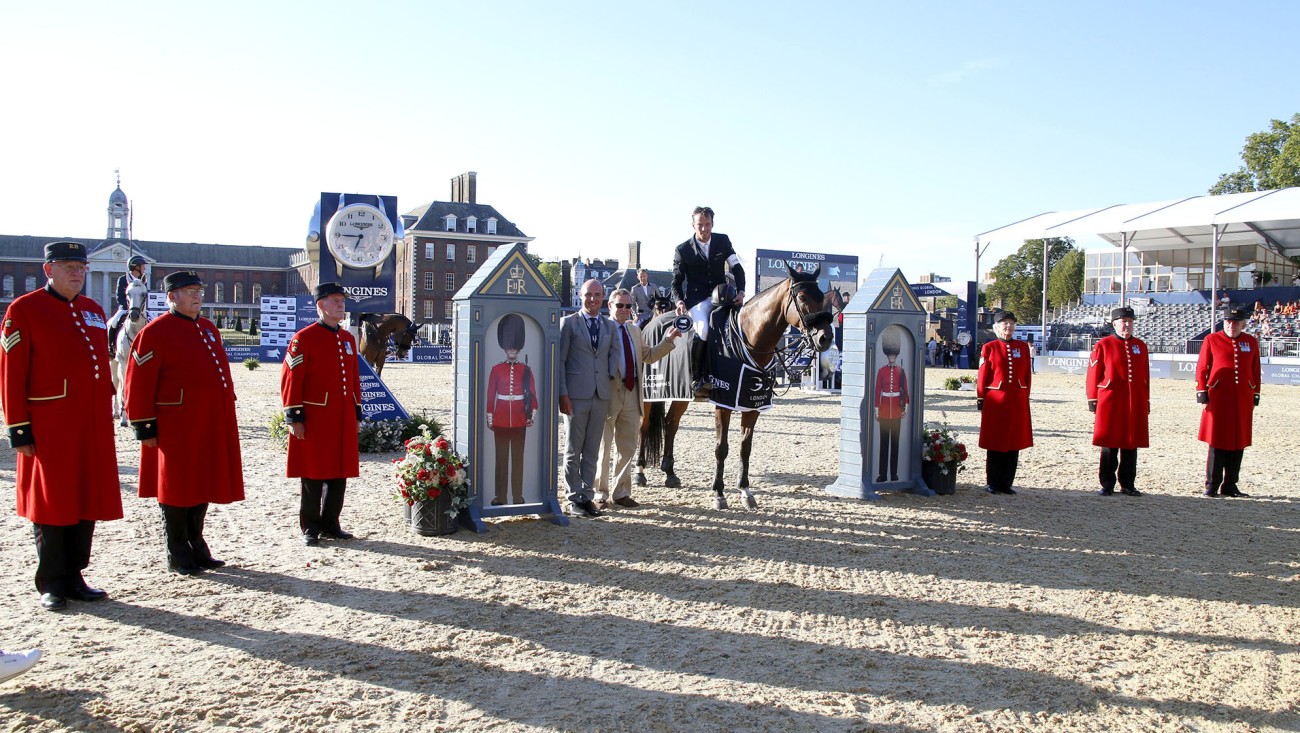 Escorted by the scarlet-coated Chelsea Pensioners, Smolders stood proudly in front of the Royal Hospital Chelsea for the prize giving, taking the win ahead of Maikel van der Vleuten (NED) with Dana Blue and Bertram Allen (IRL) in third with Hector van d’Abdijhoeve.

Harrie said: “Zinius was unbelievable this week, two wins out of two classes and I’m very proud of him. Maikel is an unbelievably efficient rider so I knew he could win, it was very close but a one-two for the Dutch is nice. It’s a fantastic venue, the weather and setting is great, with a super crowd – it’s a fantastic show.”

Uliano Vezzani set a straightforward but technical track, the 1.50/1.55m course a little tight on the time allowed but most managing it to perfection. Poles fell all over the field, but a treble combination featuring a tight distance caused most of the trouble, with riders coming in too deep to the second and third elements. A wide Longines oxer picked off a few, as did the final London emblazoned oxer, coming up fast after the tricky treble.

First to go clear was Nicola Philippaerts (BEL) the Belgian rider on phenomenal form at recent LGCT shows. Riding Bisquet Balou C, Philippaerts paved the way for the field to come and pulled out yet another foot perfect clear this weekend.

He was quickly joined by another young talent, Emil Hallundbaek (DEN) riding Dazermie – the Danish rider punching the air in delight as he cleared the finish gates, creating a jump-off for the final class of the weekend.

Others tried, but failed to join them, but the course proved tough, with many of the biggest names in show jumping falling short. Both Ludger Beerbaum (GER) and Piergiorgio Bucci (ITA) were eliminated, with others picking up just four faults but ruling them out of contention.

British hopes were raised as Robert Whitaker (GBR) and Catwalk IV joined those in the jump-off, before he was swiftly followed by Bertram Allen (IRL) with Hector van d’Abdijhoeve, Peder Fredricson (SWE) with H&M All In, World Number 1 Harrie Smolders (NED) with Zinius, Denis Lynch (IRL) with The Sinner, William Funnel (GBR) with Billy Mccain and Maikel van der Vleuten (NED) with Dana Blue making it a 9 rider jump-off.

First to go Nicola Philippaerts (BEL) entered the arena with a swish of the tail from Bisquet Balou C, the rider looking focused as he checked out the course. A lucky rub at the double had spectators on the edge of their seats, but their luck ran out at the vertical with a water tray underneath, the duo picking up four faults due to the tight line on the inside turn. 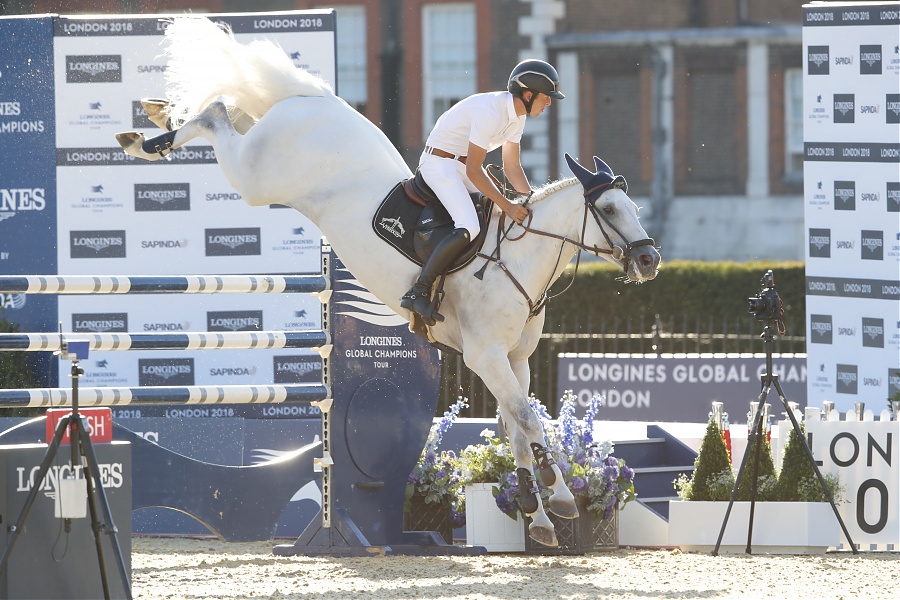 Bertram Allen (IRL) flew around the arena with the expressive Hector van d’Abdijhoeve, the Irish rider opting for the safer option knowing that a clear would propel him into the lead. The grey gelding delivered, bucking over the final fence to set the time to beat at 42.87 seconds.

Peder Fredricson (SWE) set off at a pace with H&M All In, the horse returning to CSI 5* competition after a short break. Despite their faster time, it wasn’t to be as a pole fell when they took an angle too sharp, but with a strong time of 41.08 seconds.

World Number 1 Harrie Smolders (NED) looked dangerous with lightning fast Zinius. The pair took a brilliant angle to the first fence, the Dutchman masterfully guiding his quick gelding around the arena. They were up on time, and the crowd cheered in appreciation for Smolders’ skilful horsemanship as they stopped the clock in 41.96s and took the lead.

Denis Lynch (IRL) and The Sinner gave it a valiant try, but the horse was not as quick as Zinius, the Irishman collecting a time of 43.62 seconds. British spectators were hoping for a win from William Funnel (GBR), the pair looking strong to better Smolders’ time. But there was heartbreak as the final fence fell, groans filling the arena as it tumbled despite their quicker time of 41.53 seconds. 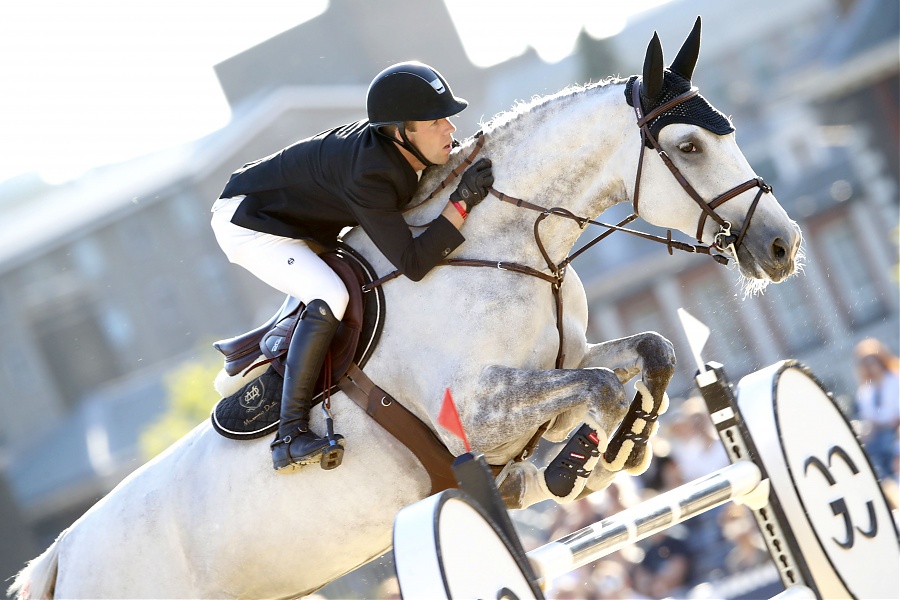 Final rider to go Maikel van der Vleuten (NED) and Dana Blue gave the jump-off course a brave shot, but the grey mare was not as naturally quick in the turns or across the ground. They pulled out all the stops, but couldn’t match Smolders’ time, finishing in second with a time of 42.23 seconds.

So Harrie Smolders (NED) would finish his weekend as he started, with a second win at the Longines Global Champions Tour (LGCT) of London. The Tour now looks to Valkenswaard, The Netherlands, and the spiritual home of the Championship for the 14th leg of action in the 2018 season.