Tryon, Mill Spring,  North Carolina, USA – May 11, 2018 – Organizers for the FEI World Equestrian Games™ Tryon 2018 (WEG) are pleased to announce the official mascots for the Games, two adorable miniature horses named Star and Huck.
Star and Huck were adopted in 2016 by Mark and Katherine Bellissimo, managing partners of Tryon Equestrian Partners, after being rescued by the Peeps Foundation, an organization dedicated to rescuing miniature horses and giving them a forever home. The duo has been inseparable ever since adoption, and have been regular fan favorites at the Tryon International Equestrian Center (TIEC), where the WEG is being held this September, since they began attending events there in 2017. 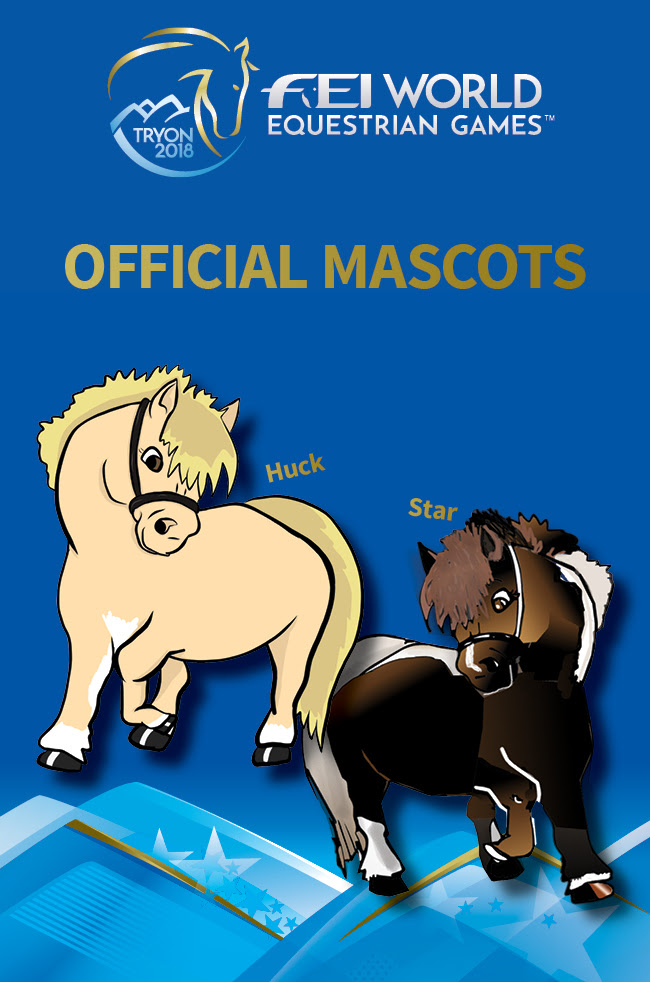 Huck & Star – World Equestrian Games Tryon 2018 Mascots
As rising social media influencers, the minis have an official Instagram account, @starandhuck, so fans all over the world can follow their journey as the official WEG mascots. Part of Star and Huck’s mascot training includes practicing the skill sets needed for each of the eight FEI disciplines, most of which are performed in a playful, comedic spirit as they strive to emulate their FEI horse role models.
Star and Huck are set to have a full calendar of public appearances as the newly-appointed official WEG mascots, including several in-person appearances at TIEC throughout the summer to interact with the local community. During the two-week event, the minis are scheduled to attend on Community Day, Monday, September 17, with other potential dates to be determined.
“We are delighted that two of our four-legged family members will be able to partake in the Games,” said Katherine Bellissimo, Chief Marketing Officer and Partner of Tryon Equestrian Partners. “We’ve brought them to a few events here at TIEC and down in Wellington, FL, and every time I am impressed at how they touch people’s lives. Their size and personalities makes them so approachable, and they thoroughly enjoy interacting with the crowds. It will be fantastic to have the two of them here for the fans to engage with during the WEG.”
In addition to their amusing personalities, Star and Huck are well known for their variety of flamboyant outfits, and will be adding to their already expansive wardrobe for the Games. They will sport discipline-specific outfits, as well as mini coolers to match the official WEG coolers, designed by Horseware Ireland.
Fans will be able to purchase a variety of Star and Huck merchandise, including a plush toy version of each mini horse along with a variety of other mascot-branded items that will be available online and on-site during the Games.
Follow Star and Huck’s road to WEG on Instagram at @StarandHuck and make plans to see them in person at an upcoming TIEC event. For more information, visit www.Tryon2018.com.
Like the @Tryon2018 Facebook page to stay informed on the most recent news.
To start planning a trip to the FEI World Equestrian Games™ Tryon 2018, visit www.Tryon2018.com.
Source: Press Release by Tryon 2018 / World Equestrian Games
Photo: © Madison Ibach