Aaron Vale (USA) and Finou earned their second-consecutive WIHS Puissance victory on Friday night, this year clearing 6’7” to take the win in the $25,000 International Jumper Puissance, presented by The Boeing Company.

“It’s the horse,” said Vale on the secret to tying with McLain Ward in 2016 and winning outright in 2017. “This horse actually has quite a bit of talent for this. It feels like he could actually jump a very big wall if the class played out that way. He’s very comfortable at it, and it’d be exciting to try something pretty high with him if it ever happened. My personal best is 7’2 ¼”. If I made higher it than that – that’s pretty high to me.” 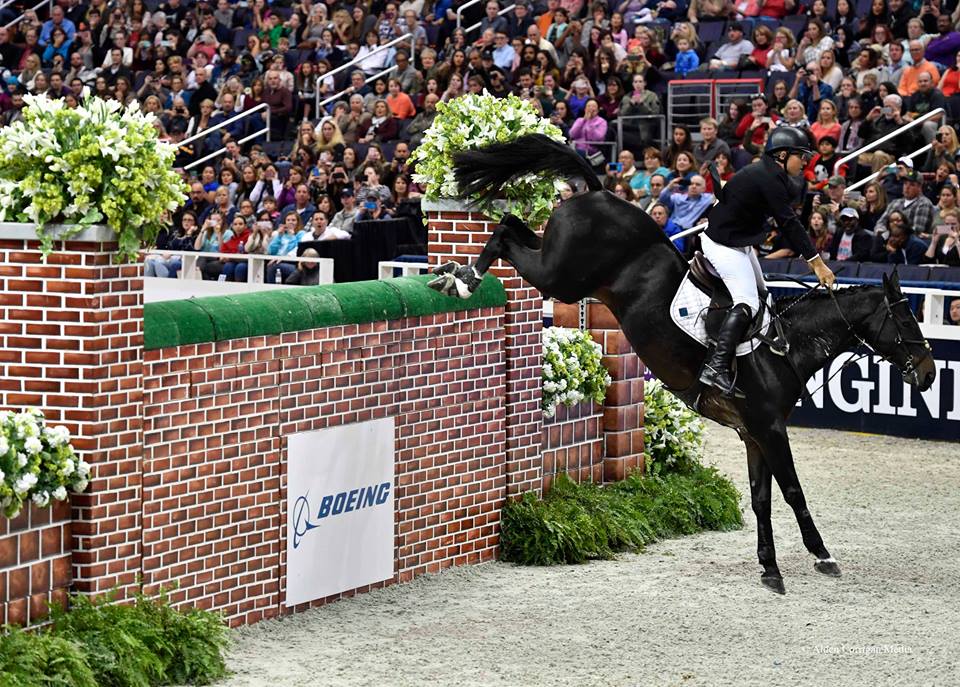 The Puissance wall began set at a height of 1.80m (5’11”) and gradually progressed to the 6’7” height through four rounds of competition. Four horse and rider combinations all successfully contested the first round, with Paulo Santana (ESA) being the first eliminated after failing to clear the wall in the second round with his mount Una du Keske Z, owned by Santana Stables LLC.

Finishing in third were Kama Godek (USA) and her own De Grande. Following Godek and De Grande’s elimination in the third round, only Vale and Hunter Holloway (USA) aboard Cassevel, owned by Hays Investment Corp., remained, and Holloway elected to save the gelding jumps for another day, opting out of the fourth round. Vale could have chosen to also call it a night and accept a tie, but much to the enjoyment of the crowd, he chose to return for a fourth and final round.

Aaron Vale was presented as the winner of the $25,000 International Jumper Puissance by Jason Pak (pictured center), the program lead for Boeing’s Veteran Outreach and Engagement efforts in the Potomac Region supporting military veterans and their families and a proud combat veteran of the U.S. Army. Photo by Shawn McMillen Photography

“We’ve got a big crowd here today, number one,” Vale said on his reasoning for choosing to return. “Number two, my horse actually is a very fresh horse, so he needs work. He’ll be jumping the grand prix tomorrow night. Last year he jumped five rounds, and then he jumped clean in the grand prix, so four rounds might not have been enough work for him! Maybe I should have come back one more time!”