A True Trifecta for Tiffany Foster in $40,000 ATCO Cup at Thunderbird Show Park 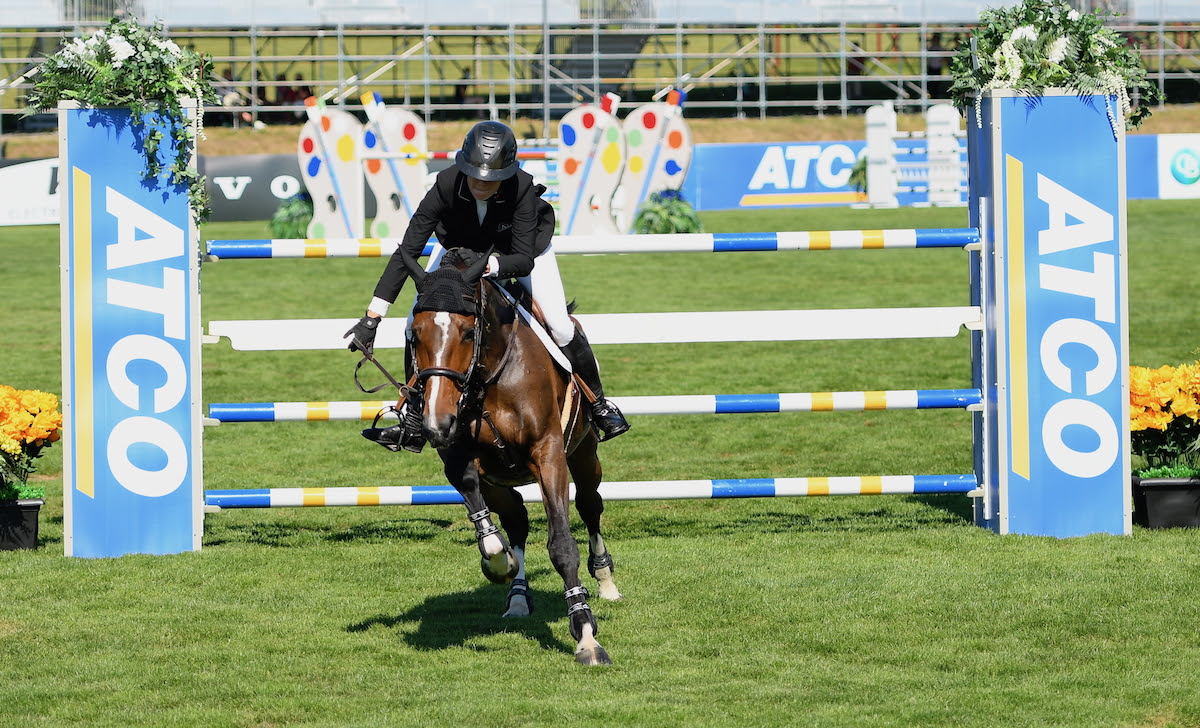 Langley, British Columbia, Canada – August 16, 2020 – Twenty-four horse and rider combinations took to the Fort Grand Prix field in the $40,000 ATCO Cup at Thunderbird Show Park on Sunday. But only one stood on the podium. Canadian Olympian and local favourite Tiffany Foster (CAN) swept the week and the Grand Prix at the 2020 Fort Classic, winning Friday’s $5,000 Maui Jim Welcome and the top three spots in Sunday’s $40,000 ATCO Cup.

“The highlight of the day, for me, was seeing Tiffany’s horses,” said Irish Olympian and CBC Sports colour commentator Eddie Macken, “they all jumped beautifully.”

It was undoubtedly the highlight for Foster as well. The 2015 Pan American team gold medalist was the busiest rider in the ATCO Cup, campaigning five horses and qualifying three for the jump off.

“I’ve definitely never ridden five horses in the Grand Prix and I’m not in a hurry to do that again,” she laughed. “It was a lot and it was so hot. I was jumping from one horse to the next. I have to say, my team really pulled together because that’s quite a feat to get five horses to the ring looking as good as they did. My main groom, Caroline Holmberg, she was like an assembly line today. I was really proud of them.”

Seven of the 24 starters mastered the first round of Canadian course designer Peter Holmes’ track. First to return with Hamilton, Foster set the time to beat at 46.94 seconds. The nine-year-old Holsteiner gelding, co-owned by Olympic team silver medalist Kent Farrington (USA), is a new and promising mount in her string.

“I’m super excited about this horse. I haven’t done an FEI class with Hamilton yet. I started with him in Florida [this winter] and he’s kind of coming into his own. He feels like he has scope to spare. He hasn’t even pricked his ears at a jump and these courses have been big enough [this week]—he just floats over them. I really don’t see a limit for him,” she enthused.

Kyle King (USA) and Coffee to Go returned next, collecting a trio of rails in the jump off. Veteran pair Ben Asselin (CAN) and Veyron followed with a strong start on a speedy track, but were ultimately eliminated after exceeding the time allowed when Veyron repeatedly spooked at a water element on course. Brian Morton (CAN) and Crusador Z fared better. Making their Grand Prix debut, the pair posted the only other double clear of the day, but weren’t able to catch Hamilton and Foster’s time.

It was Foster again, this time aboard the nine-year-old Swedish Warmblood mare Northern Light, who captured the lead. With fast footspeed and a sliced turn to the ATCO vertical, the pair knocked more than three seconds off the leading time to stop the clock at 43.65.

The mare previously won a 3* 1.50m class in Florida earlier this year.

“She’s the coolest. We haven’t had a ton of opportunity to really let her rip in the jump off, so I wanted to take today and see what I have and how fast we’ll go if I really pressed her, and she exceed all expectations. That was quite a fast round that she delivered—she did all the options, all the tests that I wanted to see. I think that would have been a competitive round just about anywhere in the world.”

With only Kyle King (USA) and his second mount, Dustin, left to contest her lead, a trio of rails from the pair assured Foster of both first and second place. She proceeded to shut out the podium with her last mount, veteran speed specialist and Friday’s Maui Jim Welcome winner, Brighton (Contendro II x Quick Star), posting a third double clear in 44.50 seconds.

“He’s such a naturally fast horse and I obviously know him like the back of my hand,” said Foster of the 14-year-old Dutch Warmblood gelding and her partner of seven years.

“He’s easy to be competitive on. I didn’t quite get the right spot to the second to last jump to do the eight in the last line but I went in knowing I was already in a pretty good position. It would have been nice for him to win both classes but I think he was happy to share the limelight with his little sister,” she smiled.

“It was fun to be first, second and third!”

Foster’s clean sweep at the Fort Classic is a high point in a tumultuous year. The Canadian rider would normally be competing in Europe at this time, but opted to return home after COVID-19 shut down competition worldwide. She’s been stabling at tbird during the pandemic.

“I wanted to be in Canada during this weird time. My family and friends are all here,” she explained. “Thunderbird Show Park took us in. It was an incredible opportunity to come to this great facility and be back home in British Columbia and I have to say I am so happy I did. They’ve been so accommodating. It’s been such a nice summer and the horses, you know, you make the best of a bad situation.

“I have a really good group of horses and the downtime has been super productive. I think I’m going to come out of this year [ahead] and hopefully next year, it’s all organized and I go do some good things!”