Lexington, Kentucky, USA. – August 1, 2020 – Top show jumping competition took to the Rolex Stadium Saturday, August 1 for the feature class of the week, the $50,000 Kentucky Summer Grand Prix. As the sun peeked out from the clouds on Saturday morning, a full roster of 47 athletes lined up to contest Bobby Murphy’s (USA) grand prix course. As the field of 11 who went clear to the jump-off amped up the speed, it was New Zealand’s Sharn Wordley (NZL) and Esmee who set the early time to beat that the rest of the class just could not catch up to.

With a time-allowed of 80 seconds in the first round track, a total of 24 combinations would post time-faults to the scoreboard, many of which fell victim to Murphy’s rollback turns that were easy to take too wide.

Aaron Vale (USA) and his Thinks Like A Horse entry Elusive would become the trailblazers of the first round, stopping the clock at 78.72 seconds following their clear ride. Soon after, Vale, who has garnered more than $3 million in prize money and over 200 top wins throughout his career, would make himself the most consistent qualifier, putting in a fault-free round aboard his second entry, Prescott.

As the morning grew on, so did the list of riders who would be joining Vale in the jump-off which included last week’s $50,000 Rood & Riddle Grand Prix winner, Celso Ariani (BRA). In addition to Vale, Ariani and Wordley, a slew of talented young riders also added their names to the second round which included Alex Matz (USA), Daisy Farish (USA), Tanner Korotkin (USA), Lacey Gilberston (USA), Annabel Revers (USA) and Anna Beth Athey (USA).

First in the ring for the jump-off were Aaron Vale (USA) and his first entry, Elusive, who set the time to beat by galloping boldly to the last jump of Murphy’s shortened course and ending their round on a time of 40.27 seconds. Hoping to follow Vale’s path, Annabel Revers (USA) and the Beechwood Stables LLC entry Callas were next to go, but Vale’s pace proved hard to beat as they closed out the class three seconds slower than the frontrunner. Sharn Wordley (NZL) and his own 11-year-old Warmblood mare, Esmee, turned up the heat. The duo were foot-perfect and blazing fast from the first to the last, just barely edging Vale out of his lead on a time of 39.97 seconds.

With eight left to see, the audience watched remotely via the ShowNet live stream as rider upon rider tried to top Wordley’s new leading time. Both Sharn Wordley (USA) and Vale had second mounts qualified for the jump-off, but Wordley elected to save his second mount for another day and withdraw Barnetta, who he co-owns with Abrahamson Equestrian LLC, from the second round. Vale’s second ride of the day, Prescott, saw an uncharacteristic two rails down and one time fault to end on a score of 9 faults. 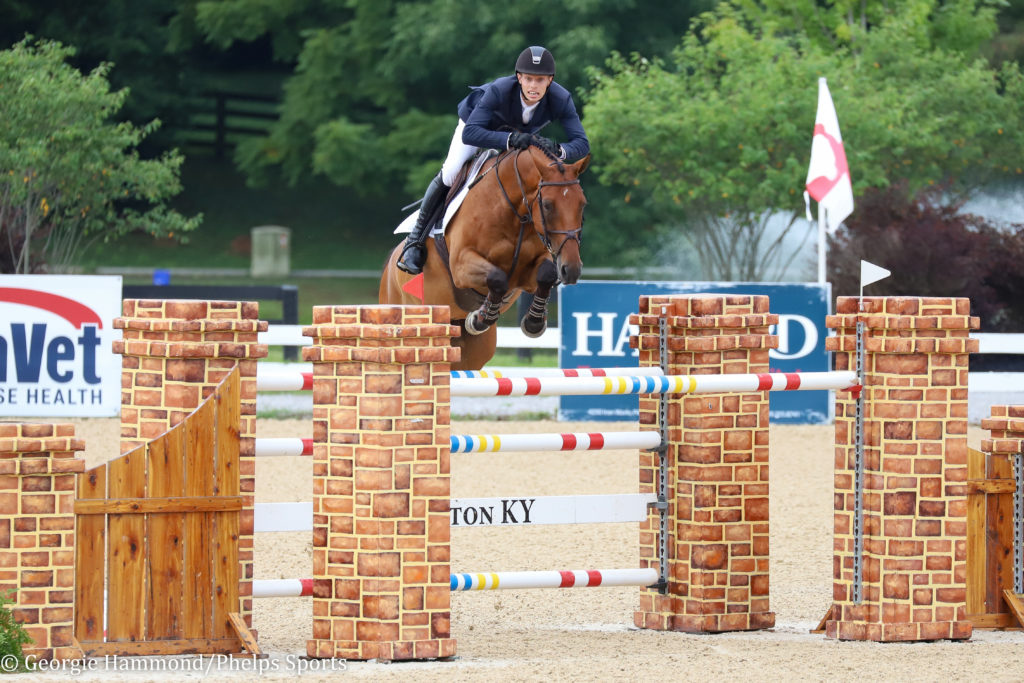 Attempting to follow Wordley and Vale’s clear path which consisted of tight turns and strong gallops down the long sides, none of the remaining riders were able to execute the shortened course at a faster pace than either of the first two leaders, solidifying Wordley’s position as the top rider this morning. Aaron Vale (USA) and Elusive would finish in second, with Alex Matz (USA) aboard Dorothy Matz’s Cashew CR rounding out the podium in third.

On Esmee:
“She’s by Berlin, she is an 11-year-old mare. I bought her from Daniel Bluman, it was a horse that Sam Wight rode. When I got her unfortunately she had an injury and was out for nearly a year. So I’ve had her a year, but she is a new horse for me. This is just my fourth show with her. She is great. The first show I took her to, she went in the Grand Prix and was second in the 1.50m in Chicago. She was second here in the Welcome, and she would have won it. I added a stride in the jump-off which I really didn’t need to do. So she won both classes, I was second. She is just great, very sensitive, extremely careful, extremely fast. She is just a great sporthorse. I am so excited about her.”

On plans for the future with Esmee:
“She is going to have a week off now and then do the last two weeks here. Then I am going to aim her for the 2* Grand Prix classes in Tryon in the fall and I will fill in the gaps somewhere with a few more things.”

On his plan for the jump-off:
“My plan was to do 11 strides from one to two, and as I was doing it, it took a long time. I could have left one out there. I kind of wanted to bow it so I could then get 10 strides across to fence three which worked well. I then bowed the turn to the next one so that I could get across easy in the eight. And then you just had to go as fast as you could to the double and fast as you could home. I think she probably had a good second faster that she could have gone. I could have left out one from one to two, and one to the skinny there. I probably could have gone nearly a second faster I think.”

On his win today:
“It’s great, because it’s my hometown. There are world-class riders here, you’ve got Aaron Vale, Shane Sweetnam, Richie Moloney. Top-class people here. In these strange times when we don’t have a whole lot of choices, we are so lucky to have a facility like this with such good footing and such lovely jumps. And I must say, the courses that Bobby [Murphy] has been doing these last two weeks have been fantastic. He is really excelling in his course building and I thought they were brilliant. The time was a little tight today, which I thought was good because there were 50-odd in it, and I think if you planned it right you could easily get inside the time. But if you didn’t, it was very easy to have a time fault as well. I thought he nailed it! He is doing a great job!”

On competing at the Kentucky Summer Classic:
“I love it here. I show here every year. I have lost count of how many years I have come here. Even if I am off doing FEI stuff, I always come back here and jump some horses. I always like to support our home show as well. We are lucky here, there is so much space here that it feels easy [to social distance]. I love it here. There is nothing you can complain about here. If you are complaining here, then you have a problem!”

On Barnetta:
“My second horse, Barnetta jumped fantastic. He’s not the fastest horse and there were so many fast in the jump-off, I would have been going from 11th to 9th or 8th and there wasn’t much prize money difference so I decided not to jump him. He’s 16 and he jumped amazing in the first round!” 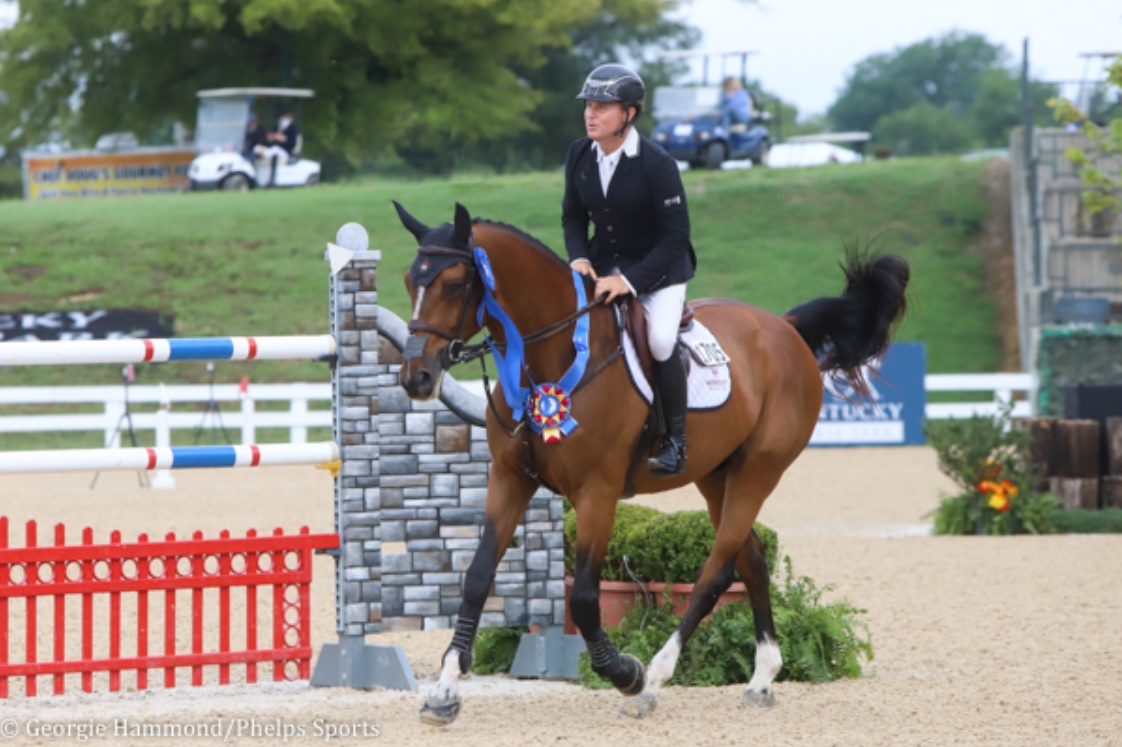