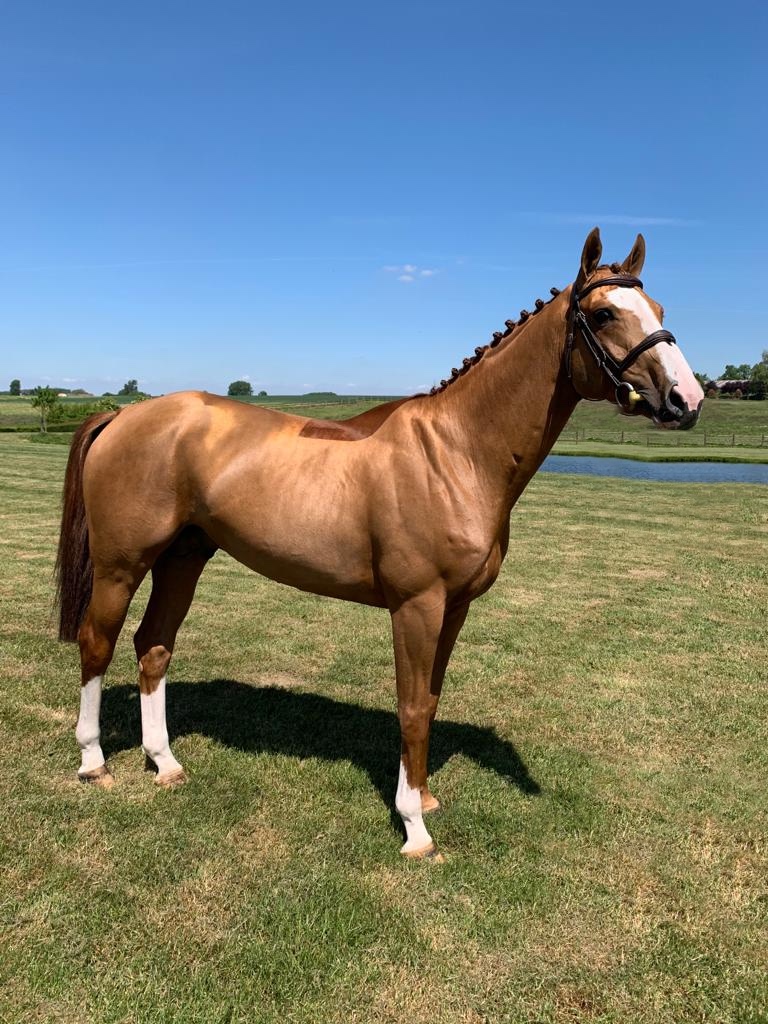 Brussels, Belgium – May 19, 2020 – Canadian entrepreneur Mark Rein and his wife, Tara, have doubled their investment with 2008 Canadian Olympic champion Eric Lamaze (CAN) and his Torrey Pines Stable.

Falco de Tatihou is a five-year-old approved Selle Français stallion (Ogrion des Champs x JPC Modesto) purchased from the breeder, Philippe Noel. In addition to being developed for the top level of the sport, Falco de Tatihou will continue to be available for breeding. He marks the first stallion that Torrey Pines Stable will stand at stud.

“I have never seen a five-year-old horse that is so athletic, so level-headed, and with natural instincts that usually take years to teach a horse,” said Lamaze, who has earned Olympic gold, silver, and bronze medals for Canada. “This is an exceptional horse, not only as a show jumping prospect but as a breeding stallion as well. He is literally the best five-year-old that I have ever come across in my career.”

Corazon is a seven-year-old bay Brandenburg mare sired by Cormint and discovered by British-based horse agent Lexi Carter. A light and modern type, the mare competed in young horse classes and at the Fédération Equestre Internationale (FEI) one-star level with Dutch rider and former owner Don Willemsen in 2019.

“Lexi suggested the horse to me after seeing it in Holland,” explained Lamaze of the purchase process. “Due to the borders being closed, I asked my good friend [Canadian Show Jumping Team veteran] Chris Pratt who is based in The Netherlands to try the horse for me. After reviewing the video, I realized that this was more than just a good horse, it is a star! I’m really looking forward to bringing this horse along.”

The most experienced of the three, Delicalato v/h Marienshof, is a 12-year-old grey Dutch Warmblood gelding (Calato Z x Indorado) also sourced by Carter. The horse has an extensive record competing at the two and three-star level in 2019 under the saddle of Swedish rider Sofia Westborg.

“This will be an exciting horse for Mark and Tara to have,” said Lamaze. “After a few small shows to get started, the horse will quickly move up to the higher levels. Mark and Tara know our sport well, and it will be fun for them come to shows and see it competing in the big classes. I think they will be especially thrilled with this horse.”

Mark and Tara Rein first met Lamaze met over 30 years ago when Lamaze was living and training in the Schomberg, Ontario, area. Now based in North Carolina, a love of the sport runs deep in the Rein family with Tara competing in the hunter/jumper divisions alongside two of their three children.

“We’ve been so excited by the progress of the first three horses we bought in March that is was easy to say yes to these three,” said Mark Rein. “You can’t help but think of the future potential when you see these horses jump.”

“I have known Mark and Tara for a long time and since we decided to partner together on some horses, they have been very supportive,” said Lamaze. “Every time I come across a horse that I feel has great potential, they are quick to work with me to buy it and are always excited about a new project coming into our stable. Their contribution to the business is something I very much value as it has allowed us to acquire horses of great quality.”

While focused on the continued expansion of the Torrey Pines Stable sales business, Lamaze is simultaneously pursuing his competitive goal of representing Canada at the rescheduled 2020 Tokyo Olympics.

“Tokyo being rescheduled to a year later is not the worst thing for me, personally,” said Lamaze, 52, who has competed at the past three consecutive Olympic Games. “The horses I am aiming for Tokyo could use another year in the saddle.”

When international show jumping competition will resume remains to be seen after the global COVID-19 pandemic brought sporting events to an abrupt halt in March.

“We are all looking forward to the shows starting again but we can’t start competing until the safety of the athletes and the support and management teams can be upheld,” stated Lamaze. “Safety must be the highest priority and needs to come first. In the meantime, we are enjoying the opportunity to train at home and are taking our time getting to know the new horses.”