“We did script it that way,” Ridland joked. “I told Laura [Kraut], we don’t want Beezie [Madden] going in the second round. That was exactly what the script was.”

Things might have gone according to plan in the end, but after Round 1, a win was hardly assured for Ridland’s squad, which included Madden (USA) on Darry Lou, Laura Kraut (USA) on Confu, Margie Engle (USA) on Royce, and Jessica Springsteen (USA) on RMF Zecilie. At the close of Round 1, the team was just one of three nations sitting on a score of 8, with Ireland leading on zero, and Great Britain in second on 4.

“I actually thought that all of us that had faults in the first round had a bit of unlucky rails,” said Springsteen, who knocked a pole at Jump 10 in Round 1. “For the second round, I didn’t want to change my plan too much; I just felt like I needed a little more space back to that vertical. Other than that, [Zecilie] jumped amazing in both rounds, so I was really thrilled with her.”

According to Course Designer Alan Wade (IRL), the true test of the track was meant to be its height, not its technicality. “I had a discussion with my assistants to keep the [1.60m] height, and the distances maybe wouldn’t be as tricky as you might have in the Grand Prix,” said Wade, who made two fences higher moving into Round 2. “This class, to me, was probably the most important class I’ve designed this year.

“It was basically up to the athletes, and they provided a great afternoon of sport. It was an honor to design the course.” 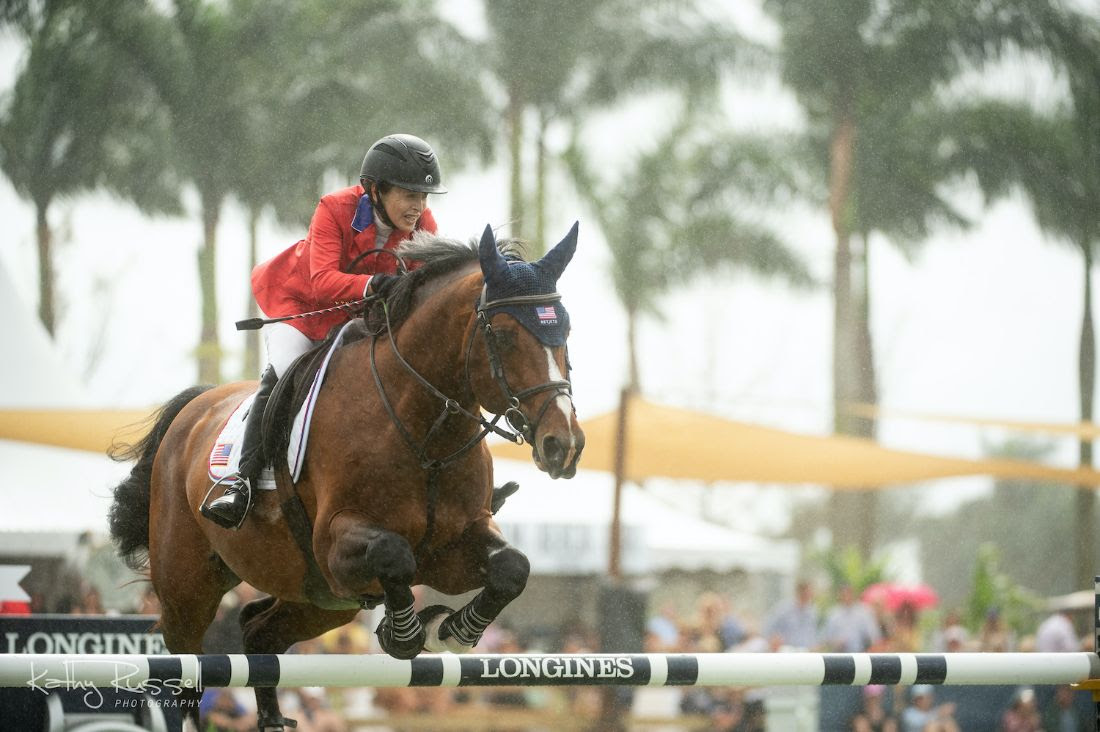 An unexpected moment occurred midway through Round 1, when veteran team member Margie Engle’s (USA) horse, Royce, completed his round on 4 faults, and then spooked at the end of the ring, unseating his rider. “I didn’t really have my reins. He darted right, and I kind of exited left,” explained a good-humored Engle, who was unhurt in the fall. “Royce hadn’t shown for the whole week, so he was nice and fresh. With the heat, I maybe left him a bit too fresh.

“After he ran around the ring for a while, he was much quieter in the second round! I took my time, and I just made sure when I went to that oxer [where I had the rail in Round 1], that I came out and got a bit straighter to it.”

Engle became the second of two clears midway through Round 2, with Springsteen leading off to set the tone for her team. Next it was up to Laura Kraut (USA), the only rider on the squad to earn a clear in the first round. Aboard her longtime partner, the 13-year-old Holsteiner gelding Confu, Kraut laid down yet another zero score, sparing her teammate, Madden, from having to jump the second round.

“You hate to be overconfident, but I was feeling good. [Confu] was jumping well down here [in Florida],” Kraut said. “I had an unlucky fence in the [Longines Grand Prix CSIO5*] the other day, and I said to myself, ‘Alright, that’s an omen that you need to do two clear rounds on Sunday.’

“That being said, it was also hard not to be overconfident when I had a team like this: great riders and horses. It’s probably the most confident that I’ve felt in a long time.”

As Round 2 drew to a close, Ireland had slipped down the standings, while two clears by Mexico’s riders would ultimately secure the squad third place on 17. Only Great Britain, at a disadvantage with only three athletes competing and no drop score (Thornton, Emily Moffitt, and Amanda Derbyshire), could still challenge the U.S. But after anchor rider Amanda Derbyshire and Cornwall BH knocked an early pole, the pressure was on during a two-rider jump-off that would ultimately determine the class winner.

True to Ridland’s prophesy, four-time Olympic medalist Madden was selected to lead off for Team USA. “For sure, I didn’t want to leave the door too open for [Thornton] to be faster than me. I think my horse [Darry Lou] actually kind of rises to the occasion when I put a little pressure on him.

“I have to say, right from the first jumps in the schooling area, he was jumping better than in the first round,” Madden said. “He [wanted] to play a little after Fence 1, and I kind of had to kick him in the belly [and be like], ‘Let’s get down to business here!’ But he really came through.”

Heading for home with the gas pedal down, Madden and the 12-year-old Dutch Warmblood stallion soared over the final oxer, stopping the clock at 33.11 seconds. Next up for Great Britain, Thornton made the most of Cornetto K’s stride and speed across the ground, but her final time of 36.34 seconds would not be enough.

“It was incredible. The energy was so enthusiastic,” said Palm Beach Masters Series® Co-Founder Katie Jacobs Robinson, who thanked the riders for the great sport and Wade for his course design. “Everyone was cheering and happy, and it really was just a fabulous event!”

Ridland, reflecting on his win, conceded that the task ahead of his team was sizeable. “This is a hard [Nations Cup] for everybody, not just for us. These horses aren’t in mid-season form, but the field of play, when you looked at the teams last night, it would have been just as easy to be fifth for any team out there. It was really good jumping.

“This is the pinnacle of the sport, the Nations Cup,” he added. “This is what the sport is all about.”

For all the event’s classes & results, please click here.

For all information about the the circuit, please visit their PB Masters website here.