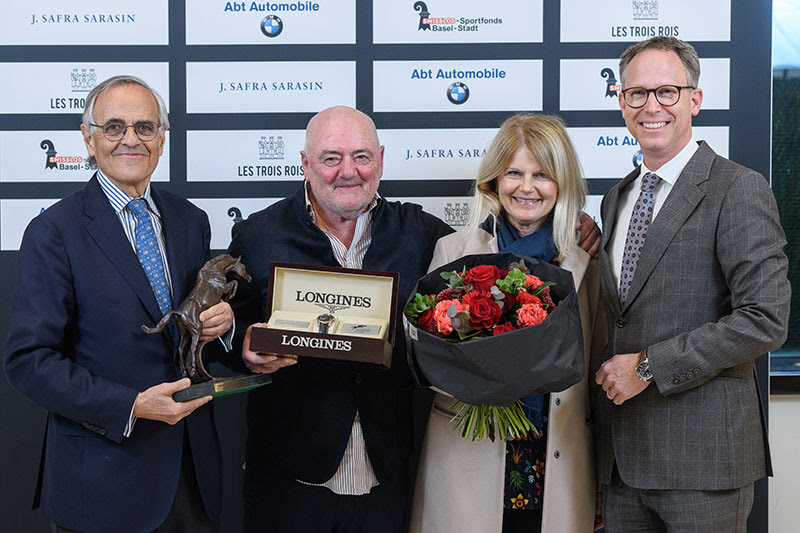 Basel, Switzerland – January 10, 2020 – Switzerland’s Luigi Baleri (SUI), owner of the top ranked horses Clooney 51, The Sinner and Chaplin, has been awarded the Longines Owner of the Year Trophy for 2019 for the second time in a row. The award ceremony took place during the Longines CSI 5*-W Basel (SUI), in the presence of Christophe Jeanneret, Brand Manager Longines Switzerland, and Dominique Mégret, Chairman of the Jumping Owners Club. This award, created in 2004 and approved by the FEI, illustrates the importance of recognizing the involvement of the owners in building an international career in show jumping. It is proudly supported by the Swiss watch brand Longines, which has recently become the Official Partner of the Jumping Owners Club

Ridden by Swiss Individual European Champion, Olympic Silver medallist and current leader of the Longines Jumping Rankings Martin Fuchs, Clooney 51, who largely contributed to this first place, enjoyed once again a string of successes throughout 2019, including an amazing and emotional individual gold medal at the Longines FEI Jumping European Championships in Rotterdam (NED), and wins in the 5* Grand Prix of Lyon (FRA), Wellington (USA), and Basel (SUI), and in Geneva (SUI). The grey gelding also recorded a fantastic 2nd place in the Longines FEI Jumping World CupTM Final in Gothenburg (SWE) still under Martin Fuchs’ saddle.

Dominique Mégret, Chairman of the Jumping Owners Club, was very pleased of the new success of Luigi Baleri for the season 2019. “Being awarded the Longines Owner of the Year one time in one’s life is already a fantastic achievement. To receive this trophy two times in a row is just amazing!” Dominique Mégret said. “As the Chairman of the JOC, I am obviously proud that one of our member sees his efforts rewarded. But above all, this performance shows how important are loyalty, faith and respect. The strong, positive and long term relationship established between Luigi and his rider and his whole team is certainly responsible for a major part of this incredible result. Building a successful long term partnership is what every rider should aim at.”

Matthieu Baumgartner, Longines Vice President Marketing, commented: “As the Official Partner of the Jumping Owners Club, it is a great pleasure to start our collaboration with the 2019 Longines Owner of the Year Award presentation to Luigi Baleri. His successes in many major events from 2019, notably in the Longines FEI World CupTM legs and Final, as well as in the Longines FEI Jumping European Championships, speak for themselves. On behalf of Longines, we would like to express our sincere congratulations to him and his team and wish him every success for the years to come.”

The next two owners in the ranking are at the 2nd place, Stuteri Arch – Charlottte Söderström (owner of H&M All In, H&M Christian K and H&M Indiana ridden by Peder Fredricson and Malin Baryard-Johnsson for Sweden) who had been awarded the Owner of the Year trophy for 2017, and at the 3rd place, Ann C. Thompson (owner of Balou du Reventon, Important de Muze and Romeo 88, ridden by Darragh Kenny for Ireland).