Petaluma, California – September 8, 2019 – Earlier in the week, Karl Cook (USA) had won the CaptiveOne FEI Welcome class on Fecybelle, and mentioned that his goal was really to prepare for the big class on Sunday. His preparation paid off in the culminating class as he and the bay mare flew home, cutting corners in their turns, to take the top spot in the $100,000 1.45m FEI Grand Prix CSI 2* Presented by Horseflight at Split Rock Jumping Tour’s Sonoma International CSI 2* in Petaluma, CA. The class was the culmination of a week of show jumping competition at the Sonoma Horse Park.
Cook was pleased with his ride, even if it wasn’t exactly what he had planned. “When you win, you can say it went the way you wanted,” he said with a laugh. “But, in the jump-off I didn’t ride exactly the plan that we had set out; between two and three I added a stride and to the last fence I added another stride.
“She’s still a new mare and I’m still getting used to her a little bit,” he continued. “In retrospect, I could have fit it in. Other than the two lines she was tight, she was fast, fences were on the angles and going, and I left out a stride to the second to last (fence). It’s still getting to know her, getting to know what I can do. With some horses, if I turn it up to that stride, then I have a rail. So, it’s kind of getting used to some of that stuff with her.”
Ten horses out of 51 starters over Alan Wade‘s 13-jump course made it to the jump-off, with Cook and Fecybelle (Carambolle x Sjapoo) going third to last. The first horse in the ring in both rounds was Mr. Europe, ridden by Karrie Rufer (USA), who set the bar early with a clean round in a time of 36.680. Keri Potter (USA) and Ariell La Sirene came the closest in the early going, with a clean round in a time of 37.960, but when Cook flashed through the timers he had left all the rails up in a time of 36.370. The last few riders failed to leave all the rails up, giving Cook the victory with Rufer second and Potter third.
“I knew the (first-round) course was more of a test of how you can ride the right track for your horse, rather than something you needed a superstar horse for. You needed to ride accurately for what would help the way your horse is and I think you saw that with people where they came with too much canter or too little canter and they paid the price,” Cook said. “The time allowed wasn’t super tight so you didn’t have to take chances there, so I thought there was absolutely a possibility (of a big jump-off). I just try to focus on what I have to do. 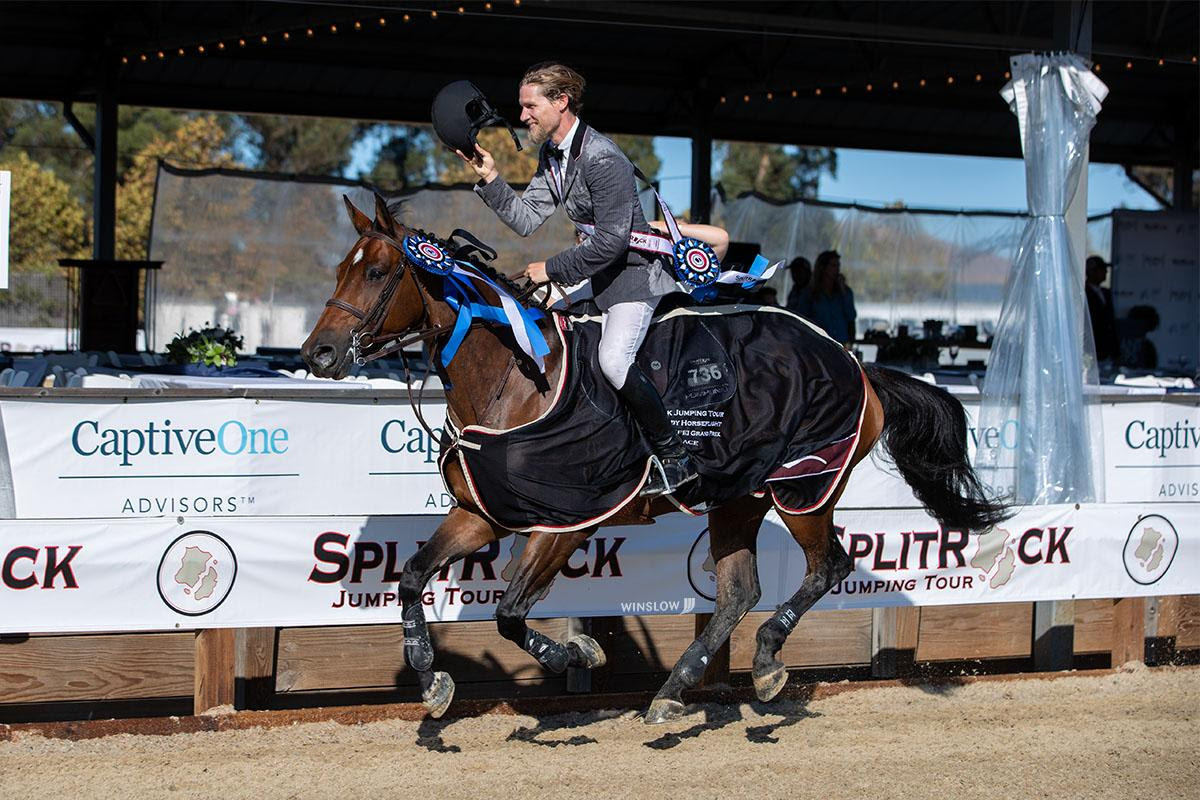 Karl Cook (USA) & Fecybelle
“I mean, you always hope for a smaller jump-off, so you feel confident you can do well,” he continued with a laugh. “But, it’s always more fun when you get a competition where you have to go. Even if you have a lower chance of winning, it’s fun. We get excited to show, you want to feel like you’ve earned it.”
Cook has only had Fecybelle since April, but she’s already proving herself a strong addition to his stable. He says the trick now is to continue to take his time to solidify their partnership.
“She will come with us to all the shows we’re going to on the west coast. I don’t think we’ll do the World Cup qualifier classes, but we’ll do the Friday classes until we get to know her,” he said. “I need to learn her, she needs to learn me and we need to figure things out together. She’s been doing super and consistent and that’s great, but at the same time you can’t get greedy. Like, ‘she’s doing great, let’s keep going up,’ until the wheels start falling off the wagon. You have to take a step back and make sure you don’t get greedy.”
About the 2019 Split Rock Jumping Tour
The 2019 Split Rock Jumping Tour features six FEI shows at five world-class venues including the Kentucky Horse Park and Split Rock Farm in Lexington, Kentucky; Sonoma Horse Park in Sonoma, California; Brave Horse Show Park in Columbus, Ohio; and HIPICO Santa Fe in Santa Fe, New Mexico. Its culminating event, the Longines FEI World Cup Qualifier Jumping Columbus CSI3*-W Presented by CaptiveOne, is one of just 14 events in the Longines FEI World Cup™ North American League that will help determine which North American riders will qualify to go to the 2020 Longines FEI World Cup™ Finals in Las Vegas, Nevada next April.
Additional information on the Split Rock Jumping Tour (SRJT) is available online at the Split Rock Jumping Tour website at http://www.SplitRockJumpingTour.com or by calling 859-252-3247.
Source: Press release by Marty Bauman / Classic Communications for Split Rock Jumping Tour
Photos: © Winslow Photography