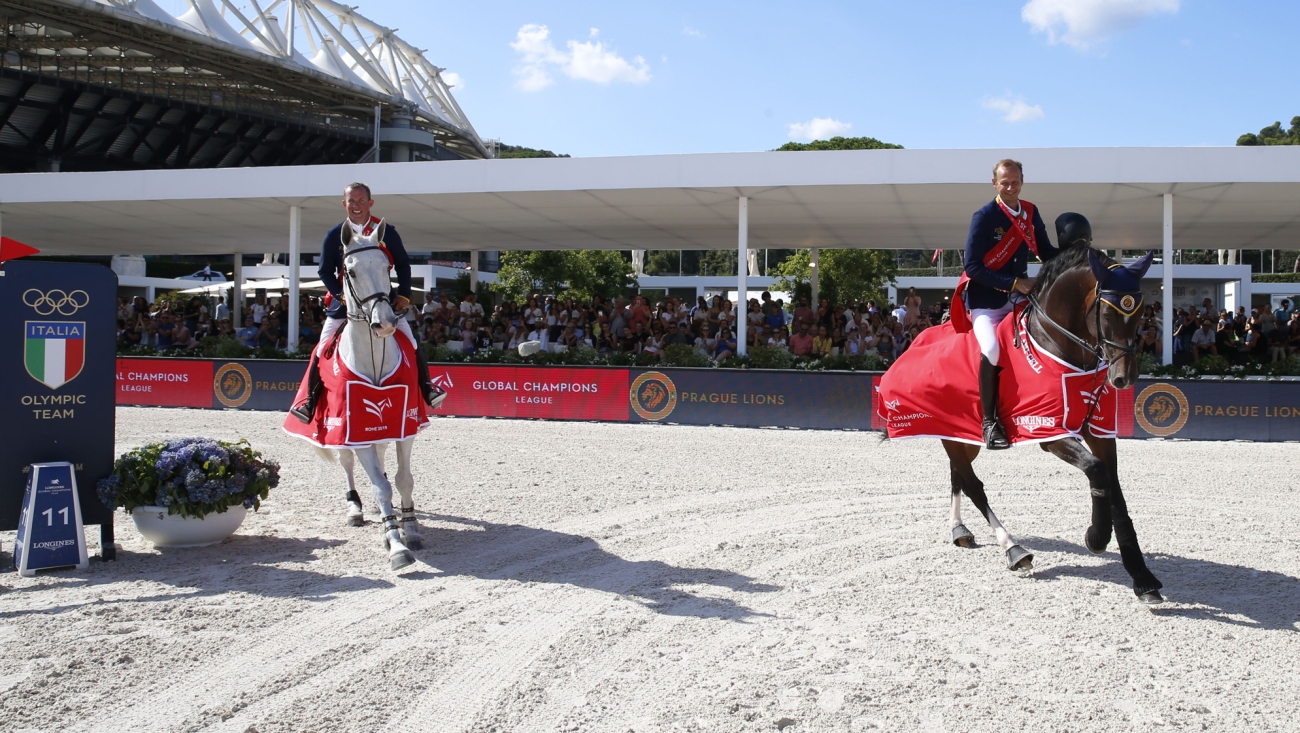 Rome, Italy – September 07, 2019 – In a drama-fuelled Global Champions League of Rome CSI 5*, the Prague Lions were the Giant-slayers today after a knife-edge competition all came down to the final fence of the class in a spectacular Italian showdown.

It was a dramatic weekend for the overall GCL Rankings, with London Knights just inching ahead in the Championship race by only one point. The team narrowly keep the lead with their tally of 288, however the St Tropez Pirates are just one point behind – heading into their home city event with a score of 287. Shanghai Swans sit in third with a total of 277 points and the Miami Celtics are only 10 points behind with 267 overall.

Today the Lions duo of Gerco Schroder (NED) and Marco Kutscher kept cool heads under enormous pressure with their horses Davino Q and Boeckmanns Lord Pezi Junior, delivering an almost flawless performance to take the win in Rome. But in a high-octane competition full of drama, nothing was guaranteed as fences fell left, right and centre.

The Hamburg Giants duo of Simon Delestre (FRA) and Bart Bles (NED) were in pole position heading into today’s competition, but after a fault from Simon and his experienced horse Hermes Ryan, the pressure was well and truly on the shoulders of last to go Bart Bles (NED) to deliver the clear, and keep the win, with his top horse Israel v/d Dennehoeve. But there was heartache for the team as the final fence fell, dropping the team to third on the podium. Second today went to Madrid in Motion, after stellar performances with Mark McAuley (IRL) with Valentino Tuiliere and Eduardo Alvarez Aznar (ESP) with Rokfeller de Pleville Bois Margot.

A delighted Gerco said: “I’m very happy with my horses – both jumped fantastic yesterday and today. My teammate also did a fantastic job so I’m very happy!”

Marco highlighted the excitement to the final moment: “I watched the Hamburg Giants from upstairs – it was a nice class with the last rider making the decision [to who would take the GCL of Rome] in the end. It’s our first time winning, I’m very happy for the team and everything worked out really well!”

Uliano Vezzani’s course featured three challenging double combinations, with riders picking up faults at each. A Longines liverpool caught out a couple, a latern-lined triple bar down the grandstand was a hefty challenge and a wide oxer by the in-gate depicting an image of the Colosseum meant horses and riders had to keep complete focus until the finish line.

Fans packed every inch of the picturesque Stadio dei Marmi, cheering and groaning as the greats of the sport were met with thrills and spills galore. Under blue skies, but with a cool breeze, there was drama at almost every moment, with unmissable action all around the arena as teams fought for supremacy.

Here’s how the action unfolded…

Valkenswaard United
After a disappointing day yesterday the United made a complete change to their horse power, with Alberto Zorzi (ITA) opting to ride Ulane de Coquerie and Marcus Ehning (GER) piloting Cristy. First to go, home hero Alberto Zorzi (ITA), was looking for redemption today after his unusual 15 faults yesterday, and set off with determination. But the first part of the GCL double fell, the pair a little flat coming into the vertical, and the first part of the Colosseum silhouette also fell putting the team onto a score of 27 faults. Marcus Ehning (GER) and Cristy absolutely flew around – finishing clear but the team would stay on 27 faults this weekend.

The Miami Celtics were looking for damage control today to keep their team in with a chance of maintaining their position in the top 4 of the overall championship rankings. Jessica Springsteen (USA) and RMF Zecilie were first to go again, and they pulled off a flawless round – Jessica smiling in delight as she patted her 12 year old bay mare. With a strategic rider change Shane Breen (IRL) came off the bench for the Celtics, bringing forward his top horse Ipswich van de Wolfsakker. But there was drama after the chestnut gelding spooked at the Longines liverpool before it all came undone, the team adding another 13 faults to their score to finish on a total of 31 faults.

Roger-Yves Bost (FRA) had another day to forget with his other horse Sangria du Coty, picking up a further 12 faults to add to the Pegasus score. A light fault for Constant van Paesschen (BEL) and his chestnut stallion Verdi Treize unsettled them and they too collected 12 faults to put the Pegasus team on a total of 41 penalty-points.

The Falcons made no changes to their horse or rider line-up, with Michael Whitaker (GBR) first to go with his 9 year old mare For Fun. They had 13 faults on the first day, but improved on that with just one down at the Colosseum silhouetted double. Bronislav Chudyba (SVK) brought back his 13 year-old-gelding New York, but they had a day to forget with 16 penalty-points and the team plummeting to a total of 33 overall.

Christian Kukuk (GER) brought back his top stallion Limonchello NT, the blue-eyed horse gleaming in the sunlight. They were a little long into the second of the doubles, just clipping the back bar to add another 4 penalty-points to their score. Ludger Beerbaum (GER) made a horse change to ride his experienced 16-year-old Casello, but they took too tight a turn to the Longines liverpool and collected 4 penalty-points to their troubles. The Eagles would fall to 21 penalty-points in Rome.

Marlon Modolo Zanotelli (BRA) was brought in for the team today, with his 10 year old chestnut horse VDL Edgar M. But they had two fences down, including the Colosseum silhouette, and the team would drop to 20 overall. Laura Kraut (USA) would keep Curious George, but they would match Marlon’s score, collecting another 8 penalty-points and putting the team on a score of 28 overall.

Another team in the top four heading into this event in Rome, the Swans were looking to regain points this weekend. But it wasn’t to be for Kim Emmen (NED) and Delvaux, the team adding another 12 faults to their score. Daniel Deusser changed horses to Calisto Blue, and the pair delivered, finishing clear to keep the team on their total of 17, but crucially ahead of Miami Celtics in points – their closest rivals in the overall Championship rankings.

The current GCL ranking leaders knew they had to produce a flawless score today to be in with any hope of maintaining the overall lead. First up was their U25 rider Emily Moffitt (GBR), bringing back her top horse Winning Good and they looked on flying form as they took on the course. But the 10 year old gelding became a little strong to the end of the course, the first part of the double coming down, as did the final Colosseum oxer. Ben Maher (GBR) piloted his top horse Explosion W, the horse looking to be on stunning form. But they too had the first part of the double down, unusually four faults added to their tally to put them on 17 overall, and slower than the Swans on their time.

New York Empire made two strategic horse changes, with Denis Lynch (IRL) up first with GC Chopin’s Bushi. But there was drama after they collected 8 faults for the team to tumble the team down to a tally of 12 overall. Hans-Dieter Dreher (GER) swapped to Berlinda but they too had an unlucky day, a further 8 faults added and plummeted the team to a total of 20 faults.

Leopold van Asten (NED) came off the bench for the Vikings today, piloting his top mare VDL Groep Miss Untouchable. The course suited the careful mare, the 12 year old bay horse jumping her heart out for the Dutch rider and working beautifully to keep all the fences up – they would finish clear. Christian Ahlmann (GER) brought back his top stallion Take A Chance On Me Z, and they opted for a steady approach. But they too had an unlucky rub at the second gold double, the first part falling to drop the team to a score of 12 overall.

There was drama at the start for the Paris Panthers after Darragh Kenny and Important de Muze unbelievably had the first two fences down. The first part of the Colosseum double fell too, an unusual 12 faults added to the team’s score. There was a scary moment for Nayel Nassar (EGY) and Lucifer V after the horse took off too early at the pillar oxer, the duo crashing through the fence. Nayel managed to keep his seat, and the pair recovered brilliantly to finish clear. However the team would finish on a total of 20 today.

The Lions came into today with just 1 time fault and Gerco Schroder (NED) was first to go with his 11 year old bay Davino Q. They survived a lucky rub early on, and pulled through to deliver a perfect clear round, keeping the team in with a chance. Marco Kutscher (GER) kept his 10-year-stallion Boeckmanns Lord Pezi Junior, but they had the back rail of colourful oxer down, the team finishing Rome on a total of 5 faults.

First of the double clears, Madrid in Motion, made no changes to their horse or rider line-up. First to go Mark McAuley brought back Valentino Tuiliere, They knew they had to deliver the clear, and a fast one at that, but they took a risk too far as the troublesome first part of the colosseum silhouette double came down. Eduardo Alvarez Aznar and Rokfeller de Pleville Bois Margot could not afford a fence, to stay in with a chance of the win or at least a podium. But there was heartache for the team as the GC oxer fell, another 4 faults putting them on a total of 8 and crucially behind the Lions who would be guaranteed a podium.

The St Tropez Pirates knew a good result today could see them catapult into the overall ranking lead. First to go Edwina Tops-Alexander brought out her 10-year-old chestnut gelding, and took no risks – opting for a steady clear. But there was shock after the Longines liverpool fell, before the gelding ran out at the colosseum silhouette much to the dismay of the team. A total of 15 faults meant the Pirates would be off the podium today. Pieter Devos (BEL) brought out his top horse Apart, and knew that he had to keep the team ahead of the Knights to take the lead. But they too would have the colosseum silhouette fence down, the team tumbling to a score of 19, and behind the Knights on points.

The final team to go, Hamburg Giants, had everything to lose – the pressure on their shoulders enormous. Simon Delestre (FRA) brought out Hermes Ryan, his experienced 14 year old gelding. However a fault at the GCL double put them on a score of 4, leaving teammate Bart Bles (NED) with no room for error as the final rider to go. Bart brought out Israel v/d Dennehoeve, his top horse, and went for a steady clear, the Dutch rider giving the horse as much time as possible to the fences. They cleared the troublesome Colosseum silhouette double and looked on song to win, until the back rail of the final fence fell, as did the team’s hopes of a win today.