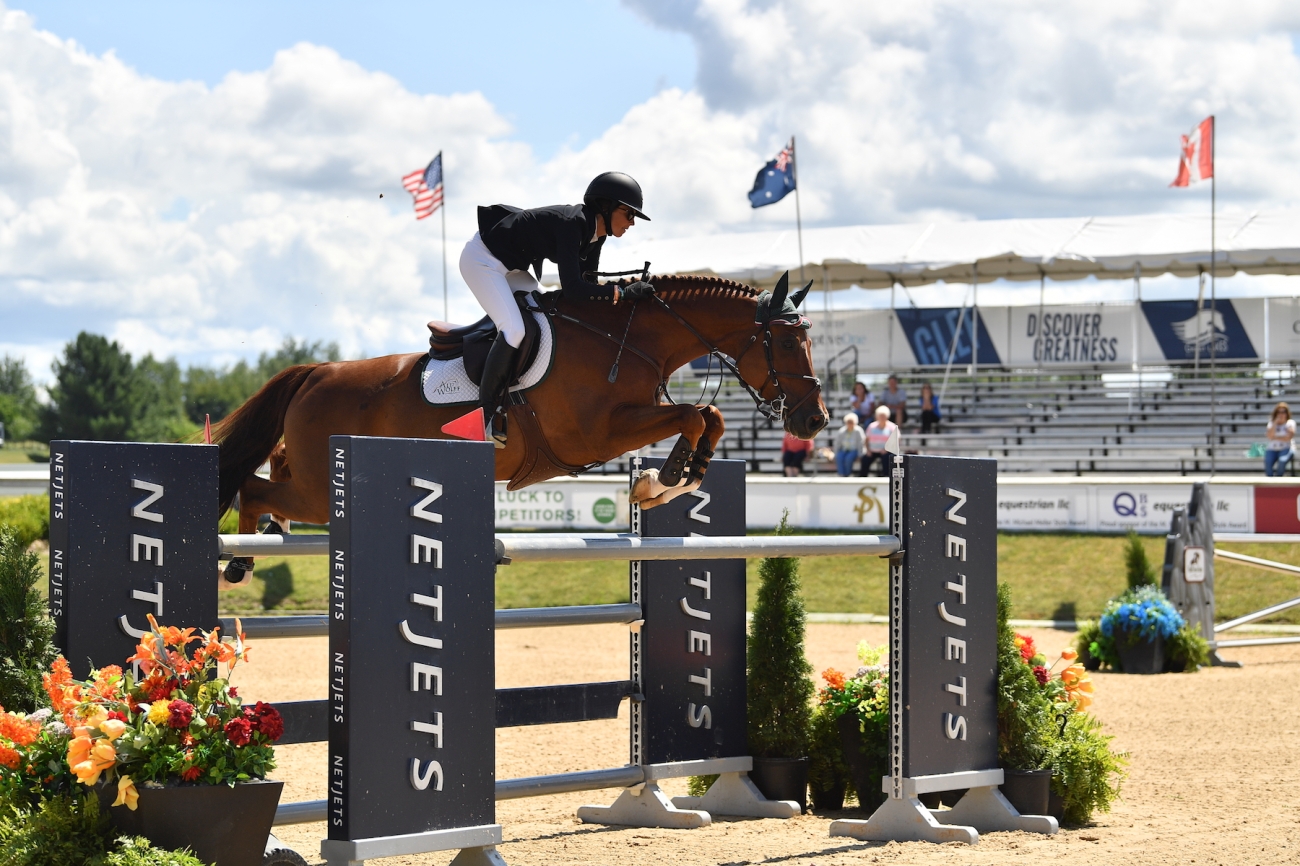 Second into the ring from the starting field of 25 horse-and-rider combinations, Wolff put the pressure on as she galloped her Blacklick Bend Farm’s Casall to a quick and efficient clear round in 57.87 seconds that would prove uncatchable for the remaining athletes. The one-round speed track set by Michel Vaillancourt (CAN), saw athletes race across 14 obstacles, including two double combinations, hoping for a clear round in a quick time to overtake Wolff.

The winning round, set forth early in the class by Wolff, was immediately followed by Andrew Kocher (USA), who also produced a clear effort in 60.10 seconds with his own 8-year-old Danish Warmblood mare Cosmona to ultimately maintain the second-place position.

Canada’s Jim Ifko (CAN) was one of the last to compete with Eventyre Farms Ltd’s Celine LS La Silla, the 10-year-old mare he rode to second place one week prior in the $35,700 Grand Traverse Classic CSI 3*. The duo finished just shy of Kocher’s time, riding to a 60.300-finish to move into third.

The only pair to challenge Wolff’s blazing time throughout the class was the winning duo from Week V’s $35,700 Grand Traverse Classic CSI 3*, Kelli Cruciotti (USA) and Zidante. Flying across the course to an impressive time of 57.74 seconds, it appeared Cruciotti would capture a repeat victory but heartbreak at the final fence would result in 4 faults and push the pair out of the top twelve.

The midwest native with a summer base at her own Blacklick Bend Farm in New Albany, Ohio, Wolff, bested the class by more than two full seconds with her seven-year partner Casall, a 14-year-old Holsteiner gelding. Kocher, Ifko and Bluman shared just two-tenths of a second between them, with the latter two riding to identical times to finish in second and joint third respectively.

Abigail McArdle (USA) maintains her spot as the top contender for the $25,000 CaptiveOne Open Jumper Rider Bonus after her Week V win in the $133,700 Staller Grand Traverse Grand Prix CSI 3*, while Wilhelm Genn (GER) remains in second. Upon Friday’s win, Wolff added herself back onto the leaderboard and into the third-place position. The $25,000 CaptiveOne Open Jumper Rider Bonus is calculated based on prize money earned throughout the six-week circuit in Open Jumper classes 1.45m and above and will be awarded Sunday, August 11, with the conclusion of the $133,700 CaptiveOne Advisors Great Lakes Grand Prix CSI 3*, that is set to begin at 2 p.m.

On Casall:
“Casall I’ve had for seven years and he and I have formed an amazing partnership. He trusts me completely, as evident by our class today. I trust him 100% and he’s just been such a great horse for me in my career. He’s taken me to nations cups, top grand prix [classes] and won a bunch of classes that I never thought I would have the chance to win, so I can’t say enough about him. Now that he’s a little bit older – he’s 14 [years old] – he’s actually come into his second wave where I can be competitive in every class and not just try and save him for one class anymore. It’s exciting. Every couple of years I have a different horse, so it’s quite exciting to see what we have the next coming years as well.”

On the course:
“I was very sick and tired of having 4 faults and getting beat. I was second in the first week we came, which was Week IV. I was second and second, so today I was ready to be competitive. Basically my plan was to just start with pace and keep on that pace the entire time. It was a nice course for him because as soon as I landed I could gallop and trust that he could cover the fence for me as long as I just kept galloping. I had quite a flier to the last fence, but he knows me well enough that he’s able to keep those ones up for me.”

On $25,000 CaptiveOne Open Jumper Rider Bonus:
“I hope I’m a contender for the CaptiveOne leaderboard. I saw I just got taken out this morning and made me very upset. I think that’s probably why I was going in there with determination so that would always be amazing to have the $25,000 rider bonus, but at the end of the day as long as we’re competitive and the horses feel great, that’s all I can ask for.”

On the Great Lakes Equestrian Festival:
“We love it here. This year we extended a week, so this time we stayed for three weeks. We really wanted to get in everything that we could both inside the horse show and outside. This horse show is a little bit unlike any other because we’re able to get outside and we’re able to tour. We’re able to go to the lake and go to the beach. We probably eat at more restaurants than we ever have, even in Florida. It’s quite amazing. Everything about this area is fantastic. I’m not supposed to say that because I’m an Ohio State fan, but we love it here and we’ll keep coming back.”