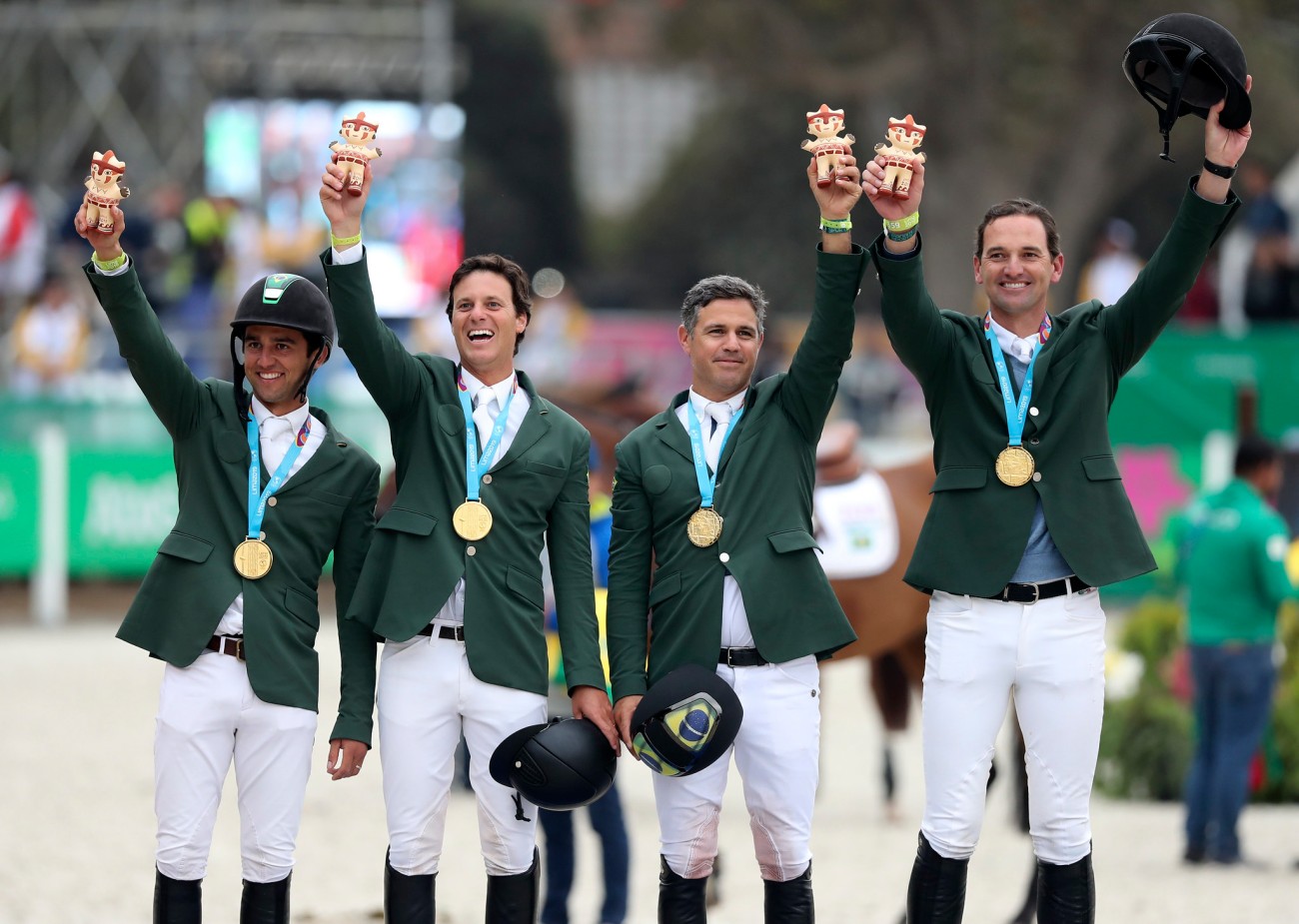 Lima, Peru – August 08, 2019 – Team Brazil capped an unforgettable two weeks at the 2019 Pan American Games with a convincing gold medal for its jumping squad at the Army Equitation School at La Molina in Lima, Peru, qualifying them for the 2020 Olympic Games in Tokyo, Japan.

The medal marked the third in as many equestrian events in Lima, after bronze medals in both dressage and eventing assured Brazil’s Olympic qualification in those respective disciplines last week.

The Americans, already qualified for Tokyo due to their gold medal at the 2018 World Equestrian Games (USA) last September, finished with the bronze medal on a team total of 23.09 points, while fourth-placed Canada secured the final Olympic qualification on a 30.21-point team total.

“We came here to qualify for Tokyo; that was the main goal and, of course, to chase this gold medal,” Menezes said. “It was a long journey to get here. It was an amazing journey together with these guys. This medal just gives the perfect end to it.”

Course designer Guilherme Jorge’s (BRA) track saw rails fall throughout, with the ever-crucial anchor riders proving to be the deciding scores. Veniss delivered on all fronts, jumping clear in the first round and recording just a single time fault as the final rider to compete. As Veniss rode his mount back toward the ingate, he repeatedly punched his fist in the air with elation, waving his arms at the crowd, who erupted and waved their Brazilian flags proudly in response.

“It was a really special day,” he said. “I think we have an amazing team. It’s really, really nice to have that medal with these guys.” 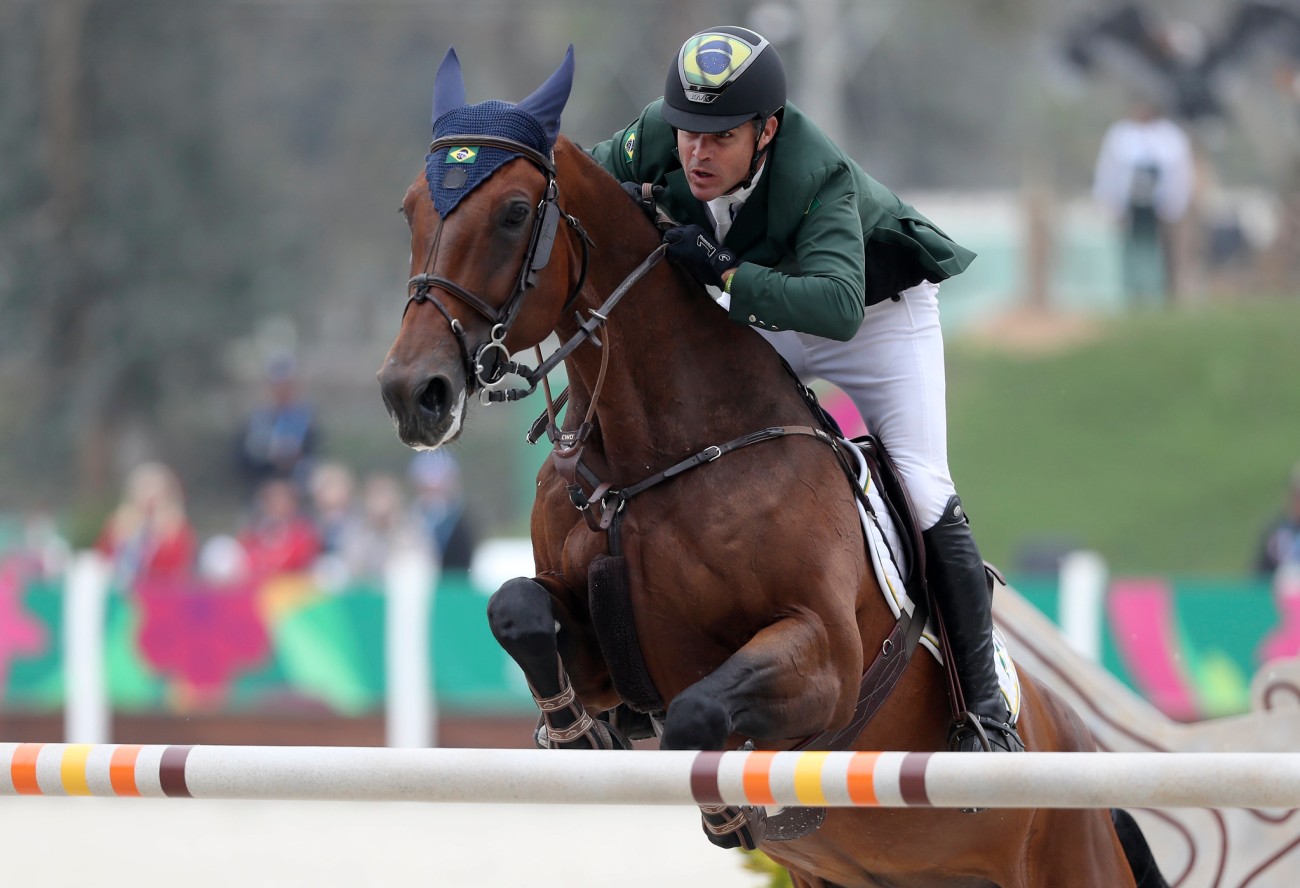 Teams entered Wednesday’s competition carrying scores from Tuesday’s faults-converted speed competition, which also served as the first individual qualifier and determined the order of go for the first round of the team final. The U.S. squad took over an early lead following clear rounds from each of its riders on Tuesday, but Brazil entered the day hot on their heels. After Wednesday’s first round, Brazil emerged as the clear leaders, and it was down to the U.S. and Mexico to battle it out for the remaining podium placings. While Mexico’s anchor Patricio Pasquel (MEX) Babel rebounded from an 8-fault first round to produce a crucial clear for his team, the U.S.’s Beezie Madden (USA) Breitling LS  fared oppositely, pulling two rails for an 8-fault score after jumping cleanly in the first round.

“This medal is very important to Mexico. I think it’s a culmination of three years of trying to take the sport in Mexico to a new level,” said Eugenio Garza Perez (MEX), who also delivered a second-round career for Mexico aboard Armani Sl Z. “We’ve really done everything together, and I think that showed in the ring. When one had to pull for the other or the other had to pull for that one, we really pulled it off together. I’m just honored to be a part of this team with such amazing teammates. We’ve dreamed about this a long time.”

The margin between silver and bronze was just 0.12 points.

“We came here for a medal. That’s what you always do in a championship,” said U.S. Chef d’Equipe Robert Ridland (USA). “We went away with a medal. We’re a little disappointed. We were in the fight for the gold until the end, and then the silver, and it slipped away. What I’m most proud of, is that all four of them were an essential part of the team yesterday and today as well.”

Veniss (BRA) and the 15-year-old Selle Francais stallion Quabri de L’Isle have skyrocketed to the top of the leaderboard heading into Friday’s individual final. Brazilian riders, in fact, currently hold two of the top three individual placings, as Lambre sits third. Both gave credit to their chef d’equipe, Philippe Guerdat, for their team’s cumulative success.

“He was the key to the gold medal,” the Brazilian teammates chimed in together. “He’s the one that brought all the techniques and also the spirit of the team. We have everything to thank him [for]. The details in right moments, and the experience he has, [were the keys] to this. We can say he’s the gold trainer!”