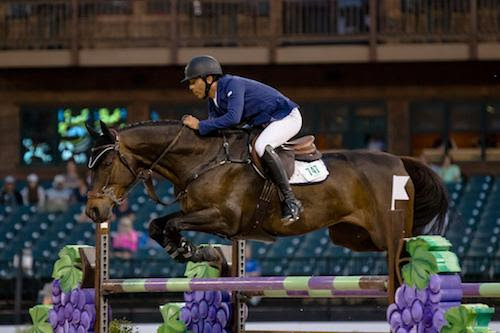 Among 22 entries with only three in the jump-off, in the course designed by Catsy Cruz (MEX), Tyree riding BEC Lorenzo, a 2010 Irish Sport Horse (Livello x Guidam) owned by Mary Tyree, remained ahead of the competition. “First I have to say I was really impressed with how the showgrounds and management staff handled the amount of rain we got here,” Tyree remarked.

“I thought for sure this afternoon that we weren’t jumping today. The ring was underwater and I have to say the ring was amazing in the jump-off, so hats off to them. That is really great for us and makes it really easy for us to come show here.”

On the course, Tyree commented, “I thought the course was nice; it was fair for a National Grand Prix. It was a really good confidence builder for everybody. My horse [Bec Lorenzo] was amazing. He’s nine years old and I’ve had him for just over a year now. This is his fourth or fifth Grand Prix, but he’s really just figuring it out and I’ve been really, really proud of him in the past few months.

“He had an amazing winter circuit and to pick up like this right off the bat is amazing. He was so game tonight, and he’s so smart and I feel really lucky to have him. He is always willing to please and tries his best. Any time we make a mistake, he learns from it really fast and it’s really been a pleasure to work with him. I have to say a big thank you to everyone at North Run (Warren, VT). It’s been a lot of work this past year, but they’ve really put a lot of time into him and I can’t thank them enough for finding him and bringing him along this way and helping me get these results with him.

“It’s definitely nice for us to come here [TIEC] after Florida, we stop here for two weeks on our way back to Vermont and it’s a really nice show to come to. It’s not as stressful as WEF and it’s a really good confidence builder for everyone coming off of a good circuit. It’s a great way to get geared up for the summer and start things off the right way. I think that he [BEC Lorenzo] has a lot of talent and a lot of abilities, so we’ll see where he ends up, but I know that whatever he does he’s going to be amazing and competitive and I’m really lucky to have him,” she concluded.