Olivier and his bay mare pulled out all the stops in the €93.500 class, finishing just ahead of Ben Maher (GBR) with Don Vito and Bertram Allen (IRL) with Izzy By Picobello in a nail-biting showdown of some of the world’s top international riders.

A smiling Olivier said: “She’s a very quick horse – I saw everyone go but I knew I had to just stick to my own plan. I’ve only had her for a few shows, Thibault [Philippaerts] has done all the hard work and she was at the top of her game. It’s an important day tomorrow but I hope it’ll go well again.”

Under blue skies and a blustery breeze, the big class for the second day of competition took place next to turquoise blue waves as kite surfers enjoying the wind. Spectators lined the arena in their swimwear, fresh from the beach, and packed out the free grandstand, cheering in delight as the best athletes in the sport took centre stage.

Uliano Vezzani set a technical 13-obstacle course, with a triple combination, a lofty NetJets vertical with a plank, and a full up 1.50m Longines vertical requiring absolute precision. The final line was extremely tricky, with a short four strides to the final fence – with light blue delicate poles falling at the lightest of touches. The longer striding horses required absolute control in-between the fences, with a water tray set just behind the fence at the penultimate obstacle drawing the horses and riders in.

First to go, and first to go clear, Denis Lynch (IRL) powered around the course with his agile gelding Hector van d’Abdijhoeve, giving the rest of the international field a guide on how to follow. But it wasn’t as easy as the pair made it look, with Peder Fredricson (SWE) and Zacramento the next duo matching their result after plenty of horses and riders took their chance and failed.

It was the last fence that cost many their chance in the jump-off, the crowd groaning in sympathy with those unlucky enough to get caught out at the final moment. One of those was home hero Laura Kraut (USA), who’s bay gelding Curious George looked right at home on the sands of Miami Beach. Laura spoke after her round: “I thought the difficulty would be the line to the VIP, but that last fence cost me, perhaps I let my guard down and he just touched it with his toe. I’d have loved to be in this jump-off as he’s jumping so well, but hopefully we’ll have a good day tomorrow.”

Georgina Bloomberg (USA) was also caught out at the final line with Quibelle. She said: “It was one unlucky rail, my horse has a big stride but we perhaps overdid it. It’s right out of the turn, and there’s a lot to look at, particularly with the waves and the wind today. She’s relatively new to Grand Prix level, so she did great today and I’m really happy with her.”

Both of the Philippaerts twins were able to fly their way into the jump-off with Olivier and Nicola up against each other. Nicola said: “There are a few options in the course, and it’s hard to make that decision. There are a few very quick combinations in the jump-off, but for sure it will be nice sport and I hope I’m up the front!”

The crowd cheered as last to go Kent Farrington (USA) and the fiery Creedance flew around the arena, the small but powerful chestnut gelding bouncing around the course to finish clear, and in prime position as last to go.

So it would be a 12 rider jump-off, with the promise of a thriller for the watching VIPs and fans.

First to go Denis Lynch (IRL) and Hector van d’Abdijhoeve returned to the arena, determination etched across the Irishman’s face. They shaved seconds off with some smart turns, including a daring chance inside the Miami Beach vertical, as Hector bucked across the finish line in celebration in 36.50s.

Peder Fredricson (SWE) and Zacramento took the first on an angle, and kept the momentum going during an inside turn next to the Miami Beach vertical. They looked up on time, however Zacramento looked at the penultimate fence and backed off just a fraction, finishing in 36.56s.

The crowd groaned as Gregory Wathelet (BEL) and MJT Nevados S’ luck ran out at the NetJets plank, ruling them out of a top spot today.

First of the Philippaerts twins Nicola and speed horse H&M Ikker covered the ground with their naturally large stride. But the back rail of the double came down, as did the Miami Beach vertical, and despite their fast time of 36.37s they would finish at the lower end of the grid.

Still on a high from their LGCT Grand Prix of Mexico City win Jérome Guery (BEL) and new mount Quel Homme  de Hus looked slower across the ground. It was close but not enough, the pair finishing in 37.24s. 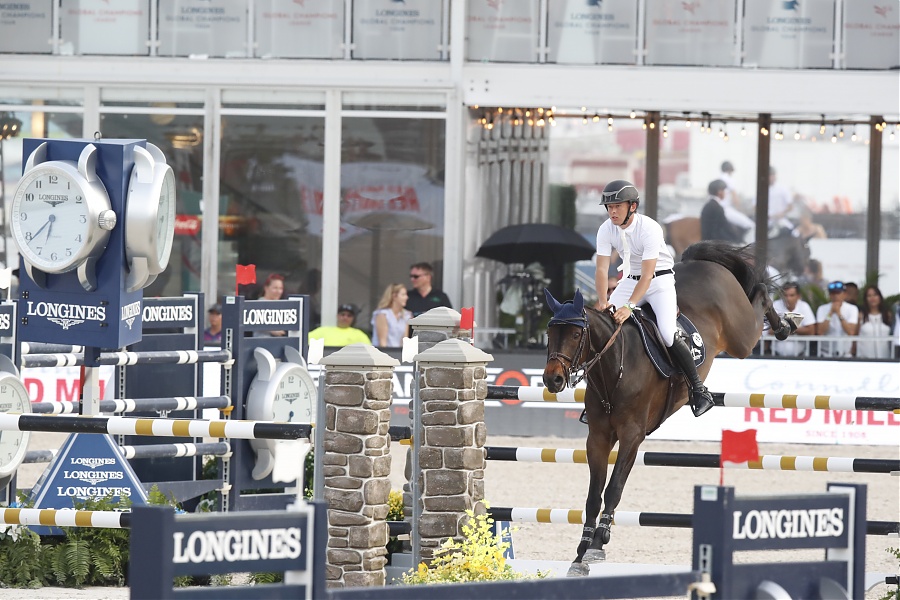 Irish speed demon Bertram Allen (IRL) was hoping to give compatriot Lynch a run for his money with Izzy By Picobello. A brilliant turn after the Miami Beach vertical and a gallop to the last put them ahead, setting a new time to beat of 36.16s seconds. 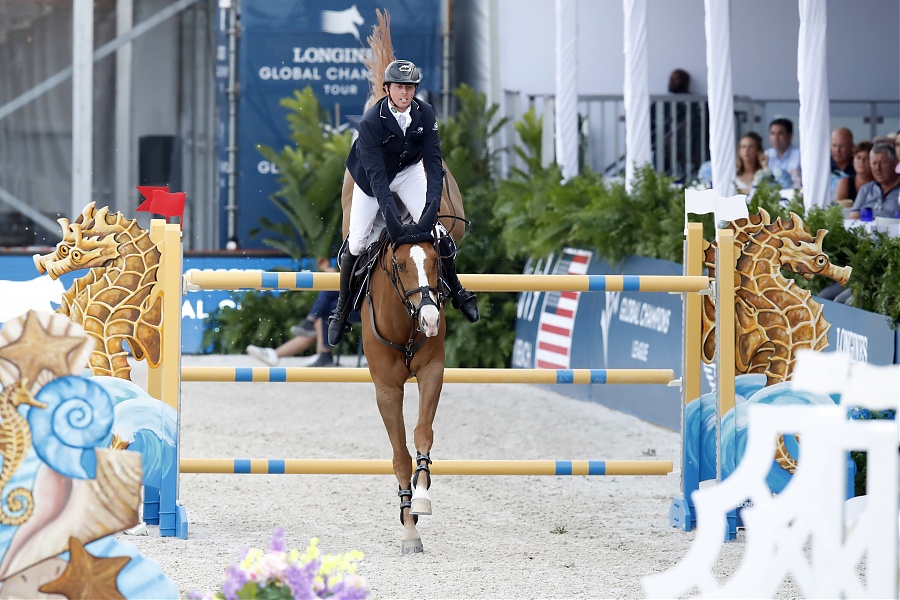 But the lead changed hands again after 2018 LGCT Champion Ben Maher (GBR) and Don Vito made a smooth turn after the Longines oxer, clipping the wing of the Miami Beach vertical but leaving it up with a race to the finish to stop the clock in 35.63 seconds.

Olivier Philippaerts (BEL) and Cataleya 3 shaved almost another full second off Maher’s time, with the pair lighting up the arena and producing a smooth and flowing round to stop the clock in 34.86s.

Former World Number 1 Harrie Smolders (NED) piloted the experienced Zinius perfectly around the first part of the course, up on time. But Zinius was a little flat at the Miami Beach vertical, rolling the pole to rule them out of contention.

Pieter Devos (BEL) and Espoir went for eight strides to the second fence, meaning they only just made the turn after. But the gallop to the Miami Beach vertical was too much, and the pole fell for a second time in two riders.

Spectators cheered as Scott Brash (GBR) and Hello Senator entered the arena. The pair galloped around the arena but Senator put the brakes on at the Longines plank, the turn too tight for the gelding’s liking and he refused at the final moment.

Final rider to go Kent Farrington (USA) and Creedance received a roar from the crowd as they cantered through the LGCT Miami Beach archway. The small chestnut gelding turned on a hairpin, but Kent also took the turn to the Longines plank too tight, Creedance getting in a little too deep and dropping them out of the running.

So it would be a win for Olivier Philippaerts (BEL) and Cataleya 3, the Belgian beaming with delight and taking home the lion’s share of the €93.500 prize purse.