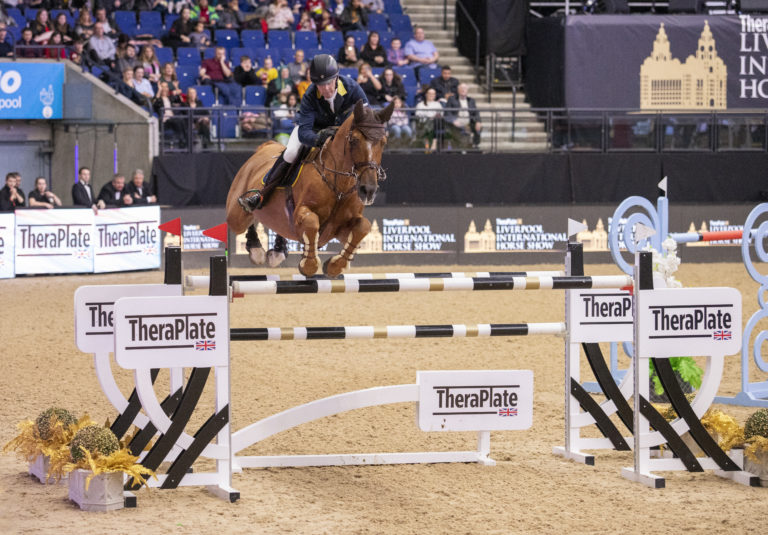 Shane Breen (IRL) ensured that Irish eyes smiled once again at the Echo Arena as he claimed a brilliant victory in the TheraPlateUK Liverpool International Grand Prix.

Seven combinations – all from Britain and Ireland – went clear from 30 starters after a first round that showcased everything about Irishman Alan Wade’s course designing skills.

Alan, who built the showjumping courses at this year’s World Equestrian Games, provided a challenging test that proved more than a match for many in a headline class that had a total prize fund of £67,000.

Jumping in reverse order on times in round one, Shane piled the pressure on his rivals with an immaculate round, clocking 38.86 seconds, which proved almost two seconds quicker than anyone else and secured a £22,000 top prize.

Harriet, a winner earlier in this year’s Liverpool show, finished second aboard Galway Bay Jed in a time of 40.52 seconds, with third place going to her fellow Briton William Funnell on the exciting eight-year-old gelding Billy Diamo.

It proved to be a thrilling competition that had a full house on the edge of its collective seat, with 44-year-old Shane’s masterly riding on a world-class horse proving an irresistible partnership.

“I jumped him at Olympia the other day and won a class there, and I wanted to leave him fresh for today,” Shane said. “I was the first clear round, it was a big course and the distances took a bit of thought.

“But my guy is in really good form, he has loads of scope and it was well within his capabilities and he has a lot of experience. There were no excuses.

“The whole show, the audience tonight, it was a pleasure to compete in front of them. All in all, I am just over the moon.

“It was our first four or five-star grand prix win – many times we have been second – so I am absolutely delighted. I am looking forward to the future with him, and I’ve had a great year with my horses.

“I take my hat off to (Liverpool International Horse Show promoter) Nina Barbour and her team. It’s incredible what they do. It gets better and better, and I really couldn’t believe the crowds this year.”

And reflecting on another Liverpool victory for the Emerald Isle, Shane added: “Maybe it is the luck of the green here.

“There have many Irish winners of the Grand National in this city as well, so maybe it is our lucky hunting ground.”