Madden, based in Cazenovia, New York, and the 10-year-old Holsteiner gelding have been consistently competing together at the top levels of the sport since summer 2015. So far in 2018, they’ve claimed victory in the Great American $1 Million Grand Prix at HITS Ocala in March and, more recently, the €345,000 Glock’s Grand Prix CSI 5* at the Glock Horse Performance Center in Treffen, Austria, in June.

Madden kicked off her week at GLEF with a win in Wednesday’s$6,000 Staller 1.40m Jumper CSI 3* class aboard Wexner’s Jiva and finished clear and in the top 10 with Coach.

On Sunday, 28 international horses and athletes were tested over the largest and most technical track the Grand Prix Ring has seen this season thus far, built by Canadian course designer Michel Vaillancourt. Eight were able to produce clear rounds throughout the first round to advance to the jump-off.

Starting off the tie-breaker was Juan Gallego (COL) and his own Fee Des Sequoias Z. They produced the first double-clear performance in 43.74 seconds. Yet, 20-year-old Hunter Holloway (USA) and Hays Investment Corp.’s VDL Bravo S took over the lead just one round later in 43.06 seconds.

After four more combinations tackled the jump-off, Holloway still led the way with only two challengers left to see, who also just so happened to be two of the top show jumping athletes in the world: fellow U.S. Olympian Margie Engle and Madden, ranked 28th and 12th in the world on the Longines Rankings list, respectively.

Engle and Madden, who are both shortlisted to compete at the FEI World Equestrian Games™ in Tryon, North Carolina, in September, arrived at GLEF fresh off from competing at the prestigious CHIO Aachen World Equestrian Festival in Aachen, Germany, where they both represented the U.S. and were teammates on the NetJets® U.S. Show Jumping Team in the FEI Jumping Nations Cup™ CSIO5* Aachen.

Engle, who secured two FEI wins during Week V in the $35,000 East Wind Farms Welcome Stake CSI 3* and $100,000 Grand Traverse Grand Prix CSI 3* on Thursday and Sunday with Dicas, was first to go of the two riding her veteran partner Royce, owned by Gladewinds Partners LLC. They were the fourth pair to finish double-clear and stopped the clock in 40.70 seconds to move to the top of the leaderboard.

Despite losing a shoe in the schooling area just prior to her jump-off round, Madden kept Coach focused and relaxed as the shoe was put back on and re-entered the ring ready to give it their all over the short course.

The pair left out strides in multiple lines and galloped flat out to the final oxer to finish six-tenths of a second ahead of Engle in 40.11 seconds to take home the top prize, garnering Engle second place and Holloway third place in the end. 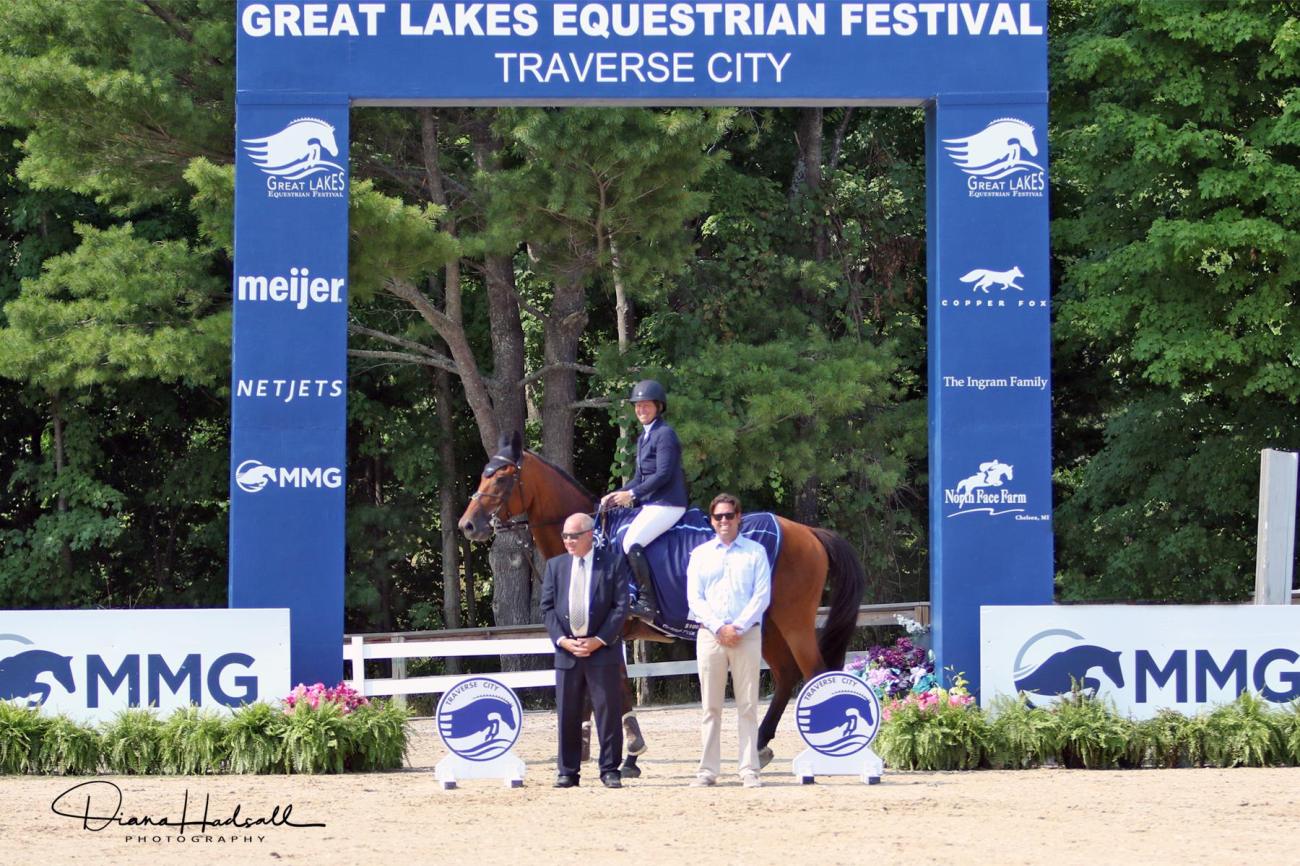 The Great Lakes Equestrian Festival would like to thank the extraordinary sponsors, exhibitors and spectators who have helped make 2018 its best year yet and looks forward to returning to Traverse City, Michigan, next year July 3-Aug. 11, 2019!