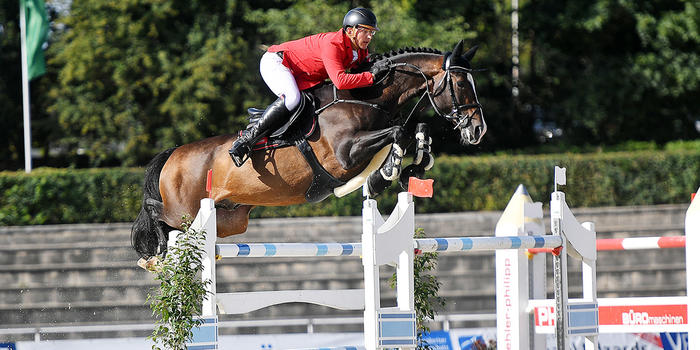 Tobias Meyer (GER) was the winner of the big test during the Verden International, the firs leg of the Verden Tour. The German rider is well known in the region from his days as a rider for the Gestüt Sprehe.

He secured victory in the €25,480 Grand Prix of the equestrian city of Verden CSI 3* with a flawless ride on the twelve-year-old Hanoverian, Special One 2 (Stakkato x Escudo I), earning top honors in the jump-off in 36.27 seconds.

The Grand Prix ended six days of tournaments in Verden, where the title “hot” was as appropriate as never before. Despite high temperatures, around 25,000 visitors from home and abroad made the pilgrimage to the large grounds. They strolled around the exhibition, enjoyed the Verden evening shows and followed their individual preferences – dressage or jumping.

Tobias “Tobi” Meyer overcame all the obstacles in the jump-off of the Grand Prix of the equestrian city of Verden, even after having a horseshoe fly right before facing the double combination. Completely unimpressed, Special One and his rider continued the round, stopping the timers at 36.27 seconds after a perfect round, which could not be beaten by the last starter in the twelve-man field in the jump-off.

Girl Power in the Course

Place two and three in the Grand Prix went to two lady riders: Alexa Stais (RSA), from South Africa, who is stationed at Hilmar Meyer in Morsum, held the lead after guiding Quintano 35 (Quintero x Canturo) to a penalty-free performance in 37.18 during the tiebreaker.