America’s Beezie Madden (54) held on to win the Longines FEI World Cup™ Jumping 2018 title in Paris (FRA) today, but she didn’t do it the easy way. In a cliffhanger of a second round she faulted for the first time over three tough days of jumping when last to go with the brilliant Breitling LS. And the crowd had to hold their breath until she crossed the line to a roar of approval, separated by just two penalty points from compatriot Devin Ryan (36) in second place.

The biggest surprise package of the week, the relatively unknown Ryan was relentlessly cool yet again as his apparently bomb-proof grey gelding son of the great stallion Zirocco Blue continued to make the super-tough courses designed by Spain’s Santiago Varela look fairly elementary. The hard-luck story of the final afternoon was that of Sweden’s Henrik von Eckermann (37) who had to settle for third place for the second year in a row. In runner-up spot and carrying four faults as the afternoon began, he might have forced Madden into a jump-off but for a mistake with Tovek’s Mary Lou in the closing moments. This evening he wasn’t forgiving himself for that. 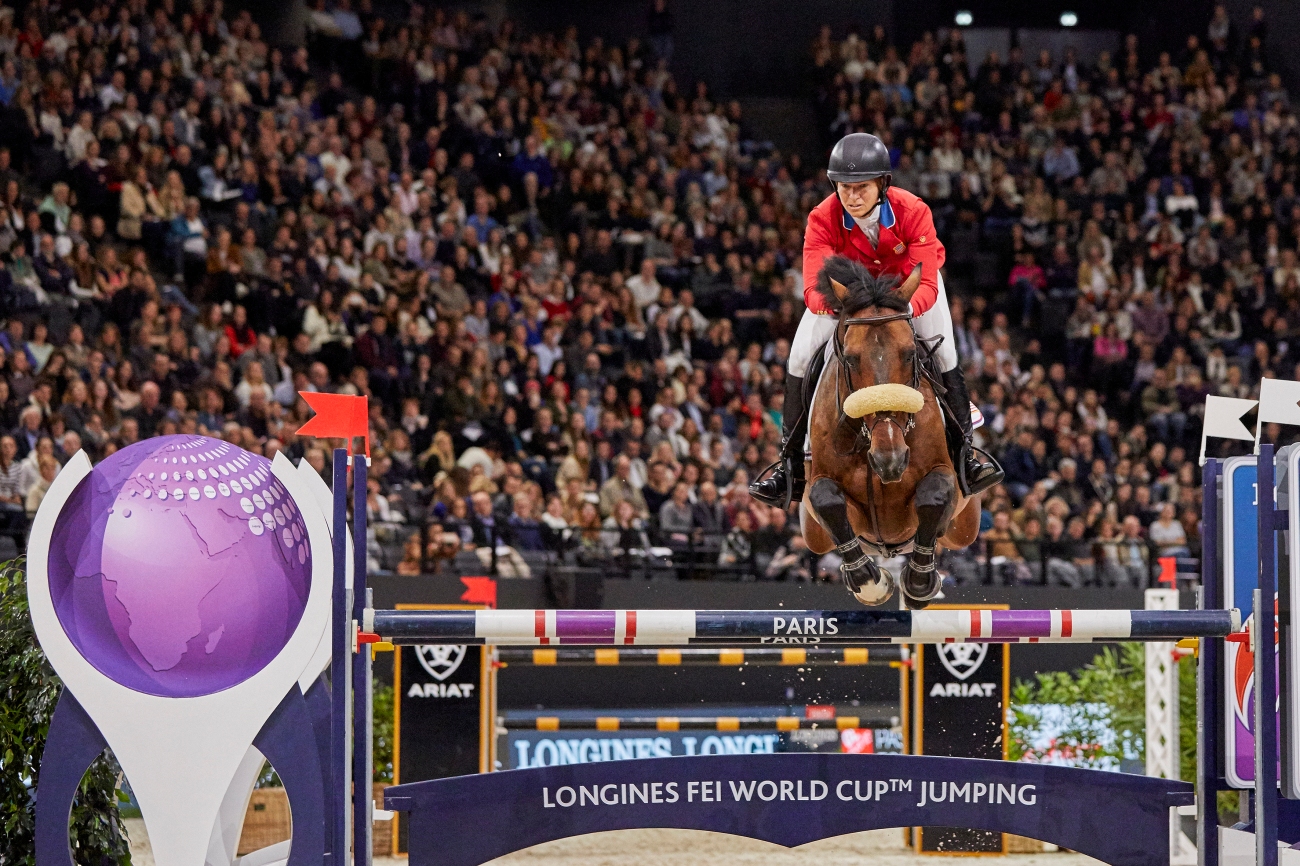 Madden knew she’d been in a fight. “When I had that rail down I was a little nervous, but I still felt my horse was jumping well and I knew I had to pull it together to finish on four (faults) and try to get it done!” she said. The rider who previously claimed the title in 2013 said it was “double-exciting” to post her second win, and particularly with this 12-year-old stallion. “We’ve really believed in him but he’s taken time to mature, so for him to come through today is fantastic! It’s taken a little while to replace Simon (her 2013 World Cup winning ride) and Cortes (team silver 2016 Olympic Games) but it’s happening!” she added.

Her two nearest rivals kept all the pressure in place when making no mistake in today’s first round, von Eckermann carrying his four points forward and Ryan still sitting on a total of six.  A little rattle at the oxer at fence three on the 13-obstacle course, and another at vertical no. 7 set American hearts beating a little faster, but Madden cleared the line with nothing to add so the top end of the standings looked the same when the top 20 returned for round two over a new track.

And Ryan, who hails from Long Valley in New Jersey, did it again, steering Eddie Blue home with apparent ease once more. At just nine years old the horse was the youngest in the Final but you’d never have guessed. “His brain is unbelievable, he never knocked a pole as a five or six-year-old, he won the American Gold Cup as an eight-year-old and was second at Devon, one of our biggest shows in the US – he’s just a fantastic horse!” said the man who qualified from the US East Coast series.

Second-last into the ring von Eckermann knew he would pressure Madden with a clear, and this evening he was beating himself up about having the second fence down this time out. “It was my mistake, my horse jumped fantastic as always, but we got too close and I interfered – I should have trusted her quality and it wouldn’t have happened”, said the clearly disappointed Swede. 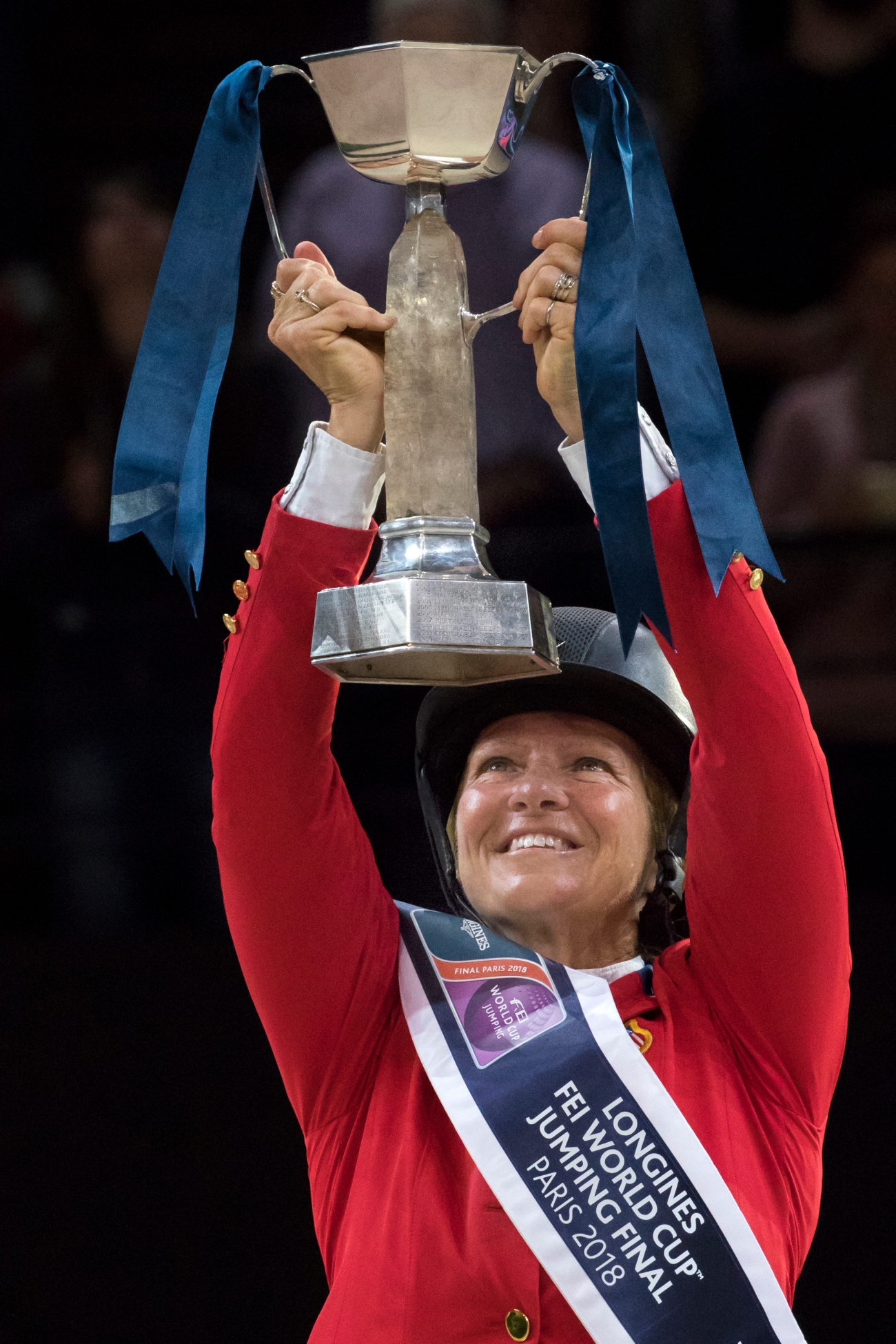 You could hear a pin drop after Madden’s stallion hit the middle element of the triple combination at fence six. Another error would hand the title to fellow-American Ryan, but the lady who has two Olympic gold medals in her trophy cabinet along with a whole lot more valuable hardware didn’t crumble, bringing Breitling home with nothing further to add for a very popular victory.

Only five female athletes have taken the title in the 40-year history of the series that every rider wants to win, and they all have one thing in common. Like today’s Longines FEI World Cup™ Jumping champion, Melanie Smith (1983), Leslie Burr Lenehan (1986) and Katharine Burdsall (1987) all flew the American flag, while three-time winner Meredith Michaels-Beerbaum from Germany (2005, 2008, 2009) was born in Los Angeles, California. It seemed history was repeating itself, as Burdsall’s victory was also posted at exactly the same Paris venue when the Jumping Final was last staged in France 31 years ago.

The final standings showed three US riders in the top four places tonight as 2017 winner, McLain Ward, slotted into fourth spot. The happiest of all was new double-champion Madden. “I love the World Cup Final – each year I make it a goal to get there, and to win, and I did it again!” said the lady who will be aiming join the elite club of three-time champions when the Final returns to Gothenburg in Sweden for the 23rd time next April.