Two former winners of this Longines FEI World Cup Jumping took the lead in this first class, a Grand Prix judged under table C, which meant that every knocked down fence was turned into penalty seconds. Beezie Madden, the winner, had indeed triumphed in Gothenburg in 2013 and the following year, German Daniel Deusser won the Lyon final. American Devin Ryan, less known in Europe, completes the podium.

Thirty-seven horses took part in this class that had some big surprises … good ones as well as bad ones. Among the good ones, this “comeback” of Daniel Deusser and Cornet d’Amour who was injured last year, as well as a perfect course by another German, Marcus Ehning, in ambush in fourth place with his beautiful Cornado NRW. Among the “bad” surprises, the average performance of the titleholders McLain Ward and HH Azur (USA) with one fence down on a course that some have found difficult with heights of a real Grand Prix. A track that did not really agree with the French riders, except Roger-Yves Bost who achieved his objective to place among the top 15. He finished 12th with the great Sangria du Coty while the other three French riders will most certainly not be able to climb back on the podium. For Kevin Staut, it was an evening to forget with five faults by Rêveur de Hurtebise. A counter-performance with no real explanation for the rider: “He is 17 years old, it was a day without, but it was perhaps also a way of expressing that he gave enough”. For him, the only goal now is to try to reach the final on Sunday.
Second episode tomorrow at 8:30 pm with the Grand Prix with jump-off. Before that, the public of the AccorHotels Arena will be able to attend the first class of the dressage riders with the first stage of the final of the FEI World Cup dressage. 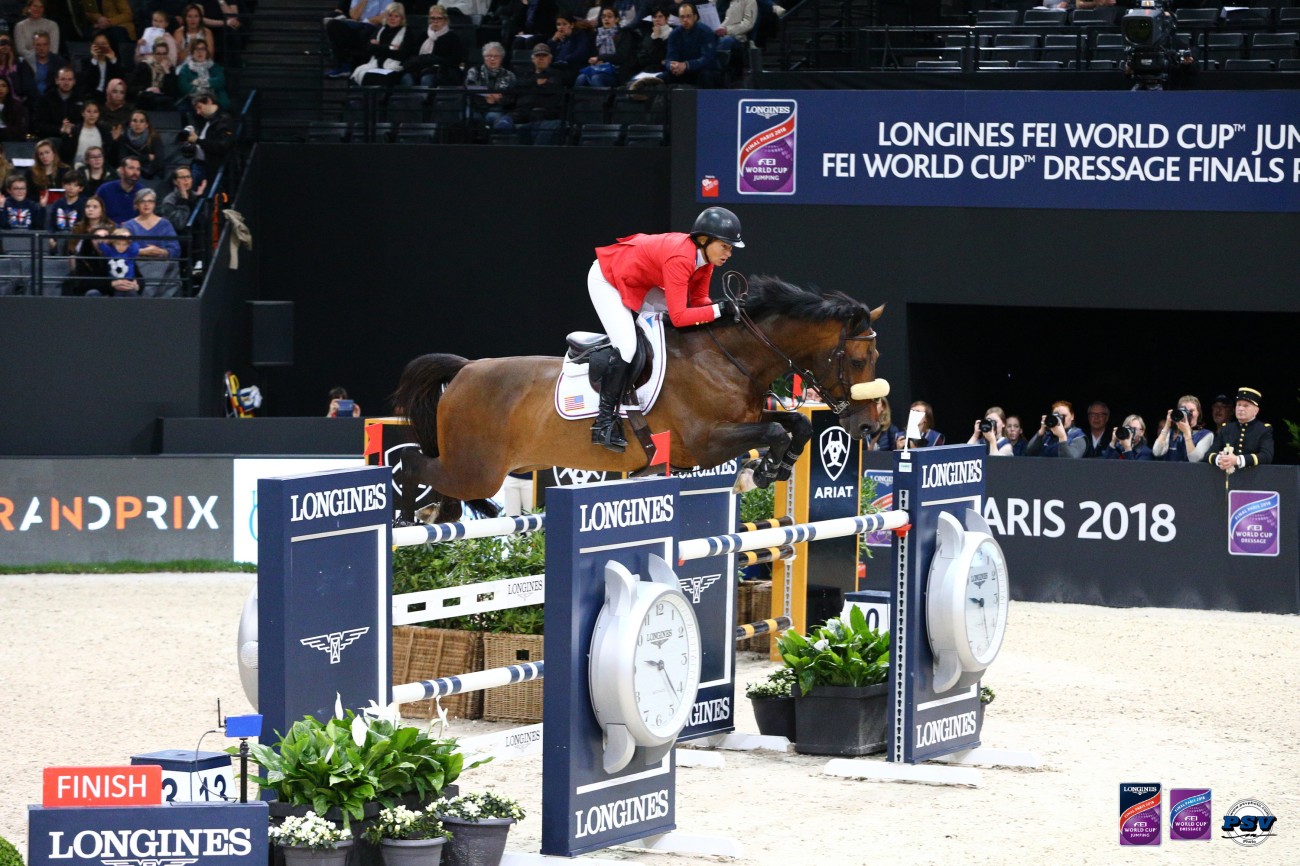 Beezie Madden (USA) & Breitling LS flying to provisional lead.
Beezie Madden (USA, 1st): “I’m really happy to have won. I took a lot of risks and I’m relieved to be in the lead tonight. The week will be long and for now, I am just happy about this victory. I will think about the rest of the competition tomorrow. Breitling LS is a 12-year-old horse that I have been riding for 5 years, he was previously ridden by World Champion Jeroen Dubbeldam. This year, I only had three weeks to prepare him for this final and he placed at each show including Grand Prix victories in Wellington and Thermal “.
Daniel Deusser (ALL, 2nd): “It was a difficult course, with no real options but at the same time this track did not put any horse in danger. Cornet d’Amour, who was injured last year, has had a nice comeback. He has already won in Paris last December at the Longines Masters. Although I also have Cornet 39 here, for now, I intend to continue the competition with Cornet d’Amourafter today’s great performance. I will see with whom I will finish this final on Sunday.”
Devin Ryan (USA, 3rd): “It’s true that I am not very well-known in Europe. It was a dream for me to represent the United States in a big championship. I am even more proud that my country is represented twice on this first podium. Eddie Blue is only 9 years old and I won almost all my qualifying points with him.”
Roger-Yves Bost (Best French rider, 12th): “My mare, Sangria du Coty, has responded well. Normally this class was the most complicated for me … but ultimately, I think the following ones will be even more difficult. Tonight, we have seen a lot of very fit combinations and we are going to have a great final.”
Santiago Varela (course designer): “It must be emphasized that even if this class is judged under table C, it is not a speed competition, but a Grand Prix course. I built in two options, but the riders only used one, the other being obviously too complicated. My concern was also to build a course that did not tire the horses too much knowing that they still have two more days of competition.”