Lacey Gilbertson & Baloppi Blossom To Victory in $25,000 Hermès Under 25 Grand Prix at WEF 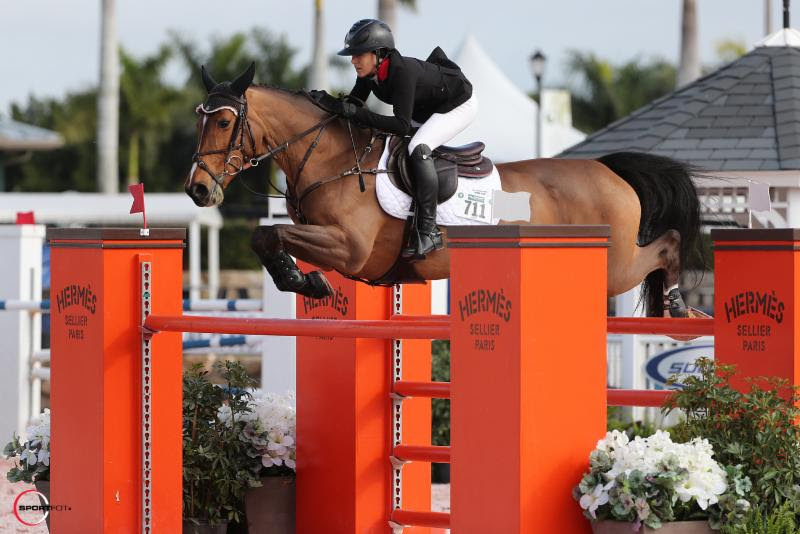 Two classes were highlighted in Sunday’s competition in the International Arena on the final day of the second week of the 2018 Winter Equestrian Festival (WEF). Marilyn Little (USA) led the field in the $35,000 Hollow Creek Farm 1.45m Classic with Clearwater, while Lacey Gilbertson (USA) was the winner of the $25,000 Hermès Under 25 Grand Prix riding Baloppi. The 12-week WEF circuit, held at the Palm Beach International Equestrian Center in Wellington, FL, runs through April 1, 2018, WEF offers more than $9 million in prize money.

With the advantage of going last in the jump-off, Gilbertson, 24, watched and saw what she needed to do for the win. She and Baloppi, an 11-year-old Danish Warmblood mare owned by Seabrook LLC, galloped through the timers in 31.756 seconds.

Emily Moffitt (GBR) and Zagahorn, a 14-year-old KWPN gelding by Matterhorn owned by Poden Farms, finished third with a time of 32.793 seconds.

“[Hunter and Emily] are both really fast, so I knew if I wanted to win I was going to have to take a bunch of chances, and luckily it paid off,” said Gilbertson. “She is very quick naturally so I never really have to run that fast. As long as I stay tidy, she is usually up there in the ribbons.”

Twenty-year-old Holloway and Eastern Jam also won Saturday’s $10,000 Hermès U25 Welcome, marking a solid start for the pair. She has ridden Eastern Jam up from the 1.20m classes two years ago.

She noted, “It has been really exciting to see where he is at now in his career and to grow with him. He is a very fast horse because he has a huge stride, so I just try to use his stride to our advantage and to keep it smooth. He was super today.”

For Moffitt, just being able to ride Zagahorn, or “Ziggy” as he is known in the barn, is a gift.

“Ziggy is my favorite,” said the 19-year-old. “He was my first horse ever and he actually colicked a few years ago and they said he would never jump again. He only had a 20% chance of living. I went to quarantine with him every day, and he made a miraculous recovery. He had two surgeries and they said, ‘You might want to consider putting him down,’ and I said, ‘Absolutely not, he is going to make it through’. He is such a fighter in and out of the ring. He loves this level, so it is nice to just zip around and have fun with him.”

All three riders said they appreciate having the Under 25 classes, as they provide a great transition from junior or amateur jumper classes to the main FEI jumper classes. 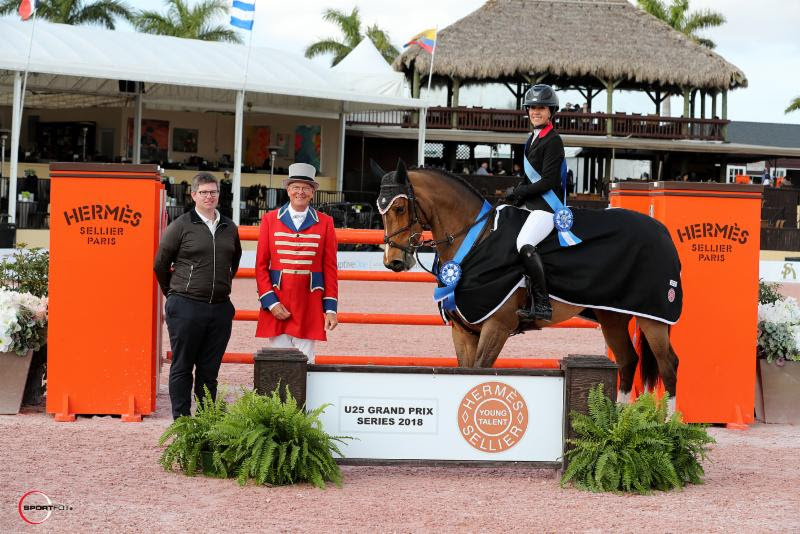 Gilbertson said, “Especially for me as an amateur it is nice to be able to go in and to have a bigger track to gain your confidence and not have to show against McLain (Ward) and Beezie (Madden) and all of those people and to still have a good chance to learn how to do it and to be competitive. My horse has not done a whole bunch in her career at the 1.50 level so it is nice for her to get to do the highs and to build her confidence. They also have to get up to that level before you can make the next step and be competitive there.”